WE BOUGHT A ZOO 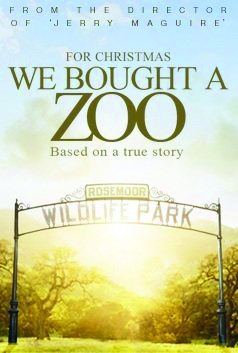 MPAA Rating: PG for language and some thematic elements

Genre: Family, Comedy, Drama, Based on a Book

SYNOPSIS: When newspaper reporter Benjamin Mee loses his wife to cancer, he decides to quit his job, buy a zoo in the country, and move his two kids there. Soon their extended family includes lions, tigers, and bears (oh my!), as well as an eclectic staff. But restoring the zoo proves to be more challenging than Benjamin imagined.

Violence/Gore. Benjamin's son Dylan faces expulsion from school after drawing dark and violent images, including one with a decapitated head emitting blood from the neck. A man threatens to kill someone he despises, but it's played for laughs. A reference to feeding in-laws to the tigers, as well as using a tranquilizer gun on a human. Real tranquilizer guns are deployed at one point, and a man finds himself in danger from an escaped animal (though he doesn't seem all that scared).

Drugs/Alcohol: Social drinking by zoo staff after hours. Benjamin's late wife is shown holding drinks in photos. References to medications for the animals, including a joke about how a tiger will get a "major buzz" from one.

Will Parents Like It? Yes, it features the "missing mom" storyline that Hollywood seems to love, but it's not too heart-wrenching because you're distracted by the story of the family restoring the zoo.

REVIEW: I haven't read the book by Benjamin Mee on which this movie is based, so I did a little research to see how the stories measure up. The movie is at times funny, sad, hopeful and inspiring, but I think the real story would have made for a more interesting film.

In the movie, Benjamin (played by Matt Damon) is an adrenaline-junkie newspaper reporter who loses his wife Katherine (Stephanie Szostak in flashbacks) to cancer and grows restless trying to raise his two kids, Dylan (Colin Ford) and Rosie (Maggie Elizabeth Jones), as a single parent.

Dylan is a talented artist, but his drawings are all of the gothic horror persuasion, including one of a decapitated head with blood streaming out of the neck. This one is on the verge of getting him expelled from school.

So Benjamin starts searching for a new home where they can all start fresh. While out looking at homes one day with a realtor (J.B. Smoove), Benjamin and Rosie are about to give up until they stumble across an old farmhouse on 18 acres in the country. It turns out to be a rundown zoo called the Rosemoor Wildlife Park, complete with lions, tigers, a grizzly bear, zebras, peacocks, porcupines, wolves and exotic snakes.

Here's where the story breaks down a little for me. The family doesn't even know it's a zoo until they go to visit the place, but wouldn't that be in the real estate listing? There also seems to be very little research prior to moving there, including getting to know the quirky staff: zookeeper Kelly Foster (Scarlett Johansson), her niece Lily (Elle Fanning), and assorted others.

There's also a scene where Benjamin says: "The sellers say you don't even need any special knowledge to run a zoo. What you need is a lot of heart." That's all well and good, but clearly, you do need SOME special knowledge, even if you have a great staff. Ask anyone who's been affected by recent tragedies involving exotic animal preserves run by regular people.

I'm sure there are reasons why director Cameron Crowe chose to Hollywoodize the real story, which as I understand from the book's Amazon page, begins when Benjamin's father dies and his 76-year-old mother needs to sell the house. They learn that the Dartmoor Wildlife Park in Devonshire, England is for sale, but needs an extensive restoration.

After much negotiating, licensing snafus, financing problems, and family conflicts, Benjamin moves to the zoo with his mother, his own family (including Katherine, who died after they bought the zoo), and his brother (played by Thomas Haden Church;  in the movie, he helps out at the zoo, but doesn't live there).

Doesn't that sound like a more interesting film than the Cameron Crowe version? I was really curious as to whether Benjamin and Kelly were attracted to each other in real life (or if there even was a Kelly), but couldn't find any intel on that right off the bat. I'll scope out the four-part series called Ben's Zoo that ran on the BBC in 2008 (hmmm, the family's daily adventures running a zoo would make a great reality show – one I'd actually watch).

But all that being said, We Bought a Zoo is still a sweet movie with a few goosebump moments that show what can be accomplished with a lot of faith, sweat equity and a few miracles. In addition to buying and restoring the zoo, we also see how Benjamin and the kids came to grips with losing a wife and mother and find a way to move on.

And little Maggie Elizabeth Jones is just adorable, especially in her scenes with Matt Damon. Those two have a father-daughter connection that you don't see on the big screen very often.