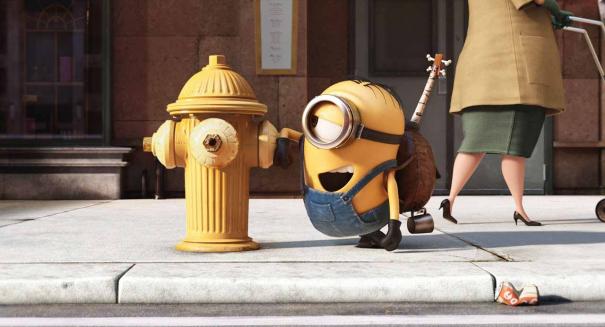 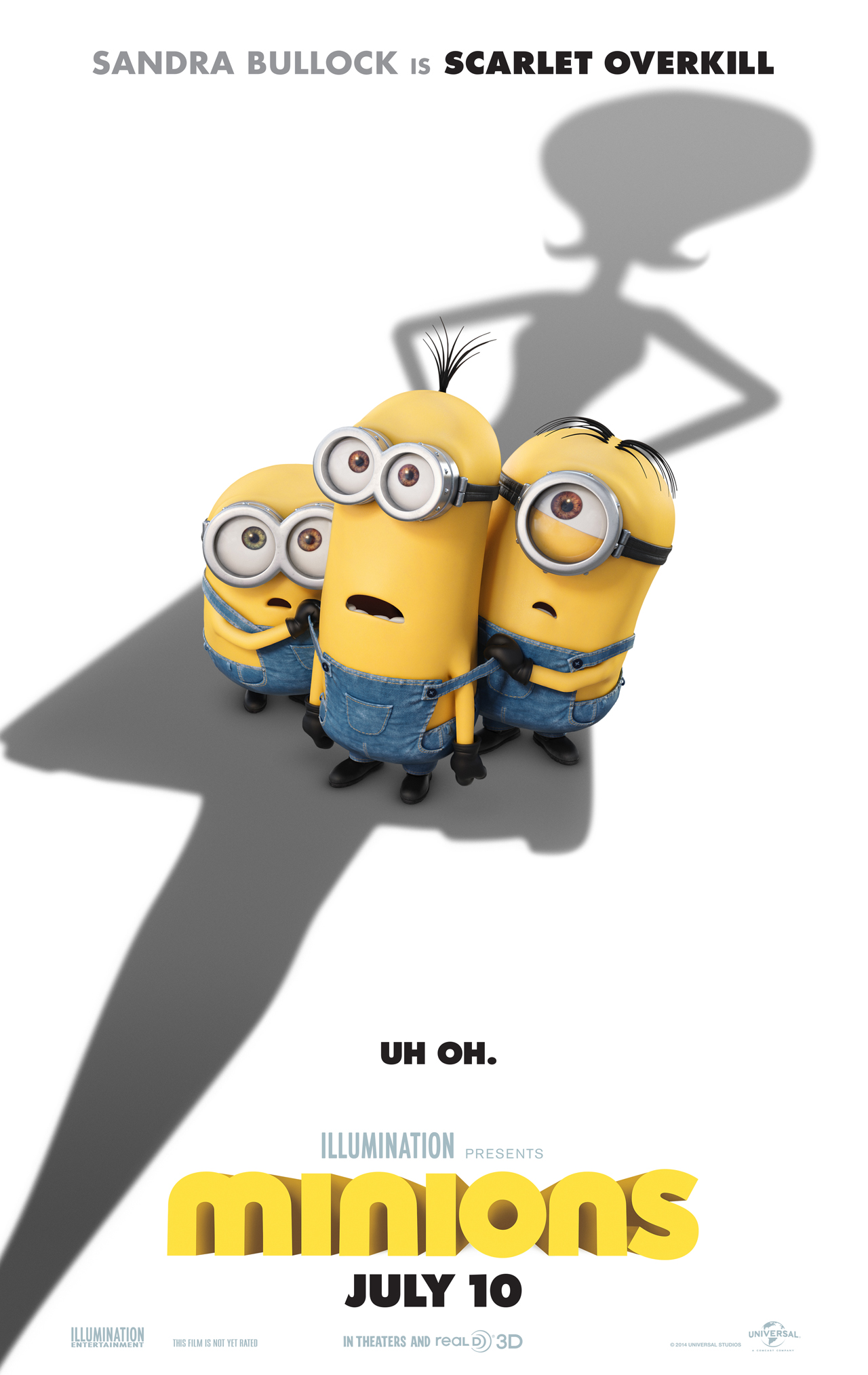 SYNOPSIS: In this prequel to "Despicable Me," Minions Stuart, Kevin and Bob are recruited by Scarlet Overkill, a super-villain who hatches a plot to take over the world.

REVIEW: Those adorable minions are back! And I couldn't be happier to see them in their very own movie and learn the origins of these loveably quirky creatures. Turns out they've been around a while. At the dawn of time, they began as single-celled organisms and evolved through the ages, serving the most despicable of masters, from T. Rex to Dracula to Napoleon.
But when they find themselves without someone to serve, they fall into a deep depression and hole up in a frigid ice cave in the middle of nowhere. So one Minion named Kevin -- alongside teenage rebel Stuart and lovable little Bob (all
three are voiced by Pierre Coffin) -- embark on a thrilling journey to find their next potential master.
The trip takes them to 1960s New York City, where they learn that "Villain-Con" is set to take place in Orlando, Florida. Where better to find a new master?! In this case, it turns out to be the evil Scarlett Overkill (voiced by Sandra Bullock), the world's first-ever female super-villain (you go, girl!).

The Minions win Scarlett's trust and accompany her to England, where they must prove their loyalty by stealing the queen's crown jewels with the help of Scarlett's weapons-specialist husband, Herb (Jon Hamm). One thing leads to another, and the Minions soon find themselves in the middle of a plot to take over the world (but of course).
It's difficult to strike the same magic as "Despicable Me," but Kevin, Stuart, Bob and their pack of quirky sidekicks are up to the challenge. They're cute, clever and amazingly resourceful, and you can't help but root for them, even though their quest is to serve the most villainous character they can find.

As in the "Despicable Me" movies, the Minions love to cause havoc, and they do it in super cute ways. I'm guessing directors Kyle Balda and Pierre Coffin and writer Brian Lynch probably didn't spend as much time on the Minions' language as Tolkien did creating the elaborate language of Middle Earth, but whatever the Minions are saying, it's adorable. It's like some wild amalgamation of English, Spanish and French, with some Czech thrown in to mix it up.

The addition of Scarlett and Herb is brilliant, especially with Bullock and Hamm channeling their wacky inner villains. Since the story takes place in the 1960s, grownups who accompany kids to the theater will appreciate the references to TV shows like "The Saint" and "The Dating Game," as well as the soundtrack's classic hits like "Happy Together," "My Generation," "You Really Got Me," and of course, "Mellow Yellow."

THE DETAILS (May Contain Spoilers):
Sex/Nudity: Brief glimpses of the Minions' bare or thonged bottoms, as well as covering up their bare bodies with sea life. London guards are hypnotized to strip down to boxers and dance and sing to the song "Hair," slapping each other on the behind.
Violence/Gore: Cartoon-like explosions, freeze guns, and villains dying in various ways (a vampire dies in the sunlight, a T-Rex falls into lava, a yeti is killed by an ice block). A family of bank robbers shoot police with paint guns. The Minions are in various peril throughout the movie, but no one is hurt. The most intense scene involves a torture chamber, but it's brief.
Profanity: Insults like "loser" and "idiot."
Drugs/Alcohol: None.
Which Kids Will Like It? Kids aged 6 and older who like the "Despicable Me" movies or cute cartoons with lots of action.
Will Grownups Like It? "Minions" is really fun, and includes lots of references that grownups will love.

JANE’S REEL RATING SYSTEM:
One Reel – Even the Force can’t save it.
Two Reels – Coulda been a contender
Three Reels – Something to talk about.
Four Reels – You want the truth? Great flick!
Five Reels – Wow! The stuff dreams are made of.
Jane Boursaw is the film critic and editor-in-chief of Reel Life With Jane. Contact her at jboursaw@charter.net. Images in this review used courtesy of Universal Pictures. Back To Top
By Jane Boursaw | July 24, 2015
Categories:  Movie Reviews
Keywords:  Movie Reviews