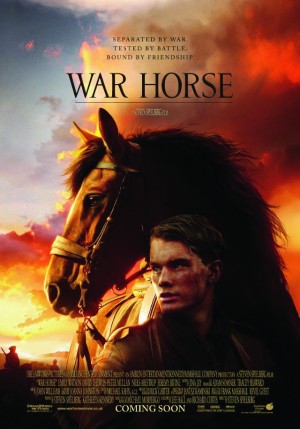 SYNOPSIS: Albert Narracott is a hard-working teenager in pre-WWI England who becomes enamored with a young colt he names Joey. He trains the horse for farm work, but is heartbroken when his cash-strapped dad sells Joey to an English soldier to be used in battle. The soldier promises to take good care of Joey and return him to Albert, but the horse's journey takes some unexpected turns.

Sex/Nudity: Two teenage boys vie for the attention of a teenage girl. One boy drives her through the countryside in his car, but she's more interested in the boy on the horse galloping beside them.

Violence/Gore. Much of the second half of the movie involves gritty war scenes, including dead and wounded humans and horses on muddy battlefields. Horses that collapse are shot - we hear the gunshot but don't actually see it land on the horse. Horses are forced to pull heavy artillery up a hill and are shot when they collapse from exhaustion. A horse collapses after getting snarled in a tangled mess of barbed wire on a battlefield. Two teenage boys who've deserted the German army are shot via firing line – we see them shot and fall to the ground from a distance. English soldiers get caught in "gas warfare" in a battlefield trench. Nurses attend to wounded soldiers in a hospital area.

Drugs/Alcohol: Albert's father drinks heavily to forget the horrors of war, and we see him stumbling around and slurring his words. At one point, he gets into an argument with Albert and pushes him to the ground. Men are seen drinking at an auction.

Which Kids Will Like It? Kids 14 and older who like movies about war or horses or rural England. There's something for everyone here, from teens to parents to grandparents.

Will Parents Like It? It's Spielberg's usual lush production with attention to the smallest detail, but the feel-good story shines through, along with a somewhat predictable ending.

REVIEW: If you've seen enough Steven Spielberg movies, you can almost spot one at a glance. Lush production with authentic locations, attention to the smallest detail, gorgeous cinematography by longtime collaborator Janusz Kaminski, epic score by John Williams, well-cast actors and believable dialogue. War Horse has all that and more, set against the backdrop of World War I in rural England.

Based on a 1982 children's novel by Michael Morpurgo and a 2007 stage adaptation, the story begins with English teenager Albert Narracott (Jeremy Irvine) watching the birth of a beautiful colt near his rural farm. Despite his best efforts to get the colt to warm up to him, it doesn't happen, and the young horse is sent off to auction.

Cut to the auction site, and Albert's father Ted (Peter Mullan) gets caught up in a bidding war against his curmudgeonly landlord Mr. Lyons (David Thewlis). Even though what Ted really needs is a sturdy plow horse, he ends up using the family's rent money to outbid Lyons on the young Thoroughbred, much to the chagrin of his long-suffering wife Rose (Emily Watson).

But Albert is thrilled and agrees to train "Joey" to pull a farm plow so the family can plant turnips and pay the rent after the fall harvest. But when a rainstorm damages the crop, Ted is forced to do the unthinkable – go behind Albert's back and sell Joey to a cavalry officer, Captain Nicholls (Tom Hiddleston), who promises to look after the horse and, if possible, return him to Albert's care after the war.

But Joey's journey takes some unexpected turns, as we follow him through a misguided battle, on the run with two young German soldiers, in the care of a French farm girl, pulling heavy artillery up a hill for the German army, and smack in the middle of a battlefield in 1918, where a small moment in the midst of war gives hope that perhaps two opposing armies can work together.

Spielberg doesn't gloss over the horrors of war. We see muddy battlefields strewn with dead humans and horses, a German gas attack that takes soldiers by surprise, and horses that are shot after they collapse from exhaustion. It's hard to watch, and I don't recommend it for kids younger than 14 or anyone who gets squeamish about war scenes and brutality against animals.

On the plus side, the story offers some insight on the horrors of war during a time when kids had to work hard to help the family hang on to their homes and farms. No kicking back with video games for THESE kids. The horse in War Horse may get people to the theater, but the movie teaches us about life during wartime in rural England and France.

I love how the story follows Joey's journey through several people, but circles back around to Albert, who enlists in the army as soon as he's old enough, with the hope that he'll find his beloved horse again. Both Joey and Albert are noble, brave and don't shirk from their duties and responsibilities.

And even though I usually weep profusely during movies like this, I didn't with War Horse. I think it's because it's a feel-good story that's predictable enough that I knew things would turn out well for our heroes. It's not a movie I need to see again right away, but I'm glad I saw it the first time.