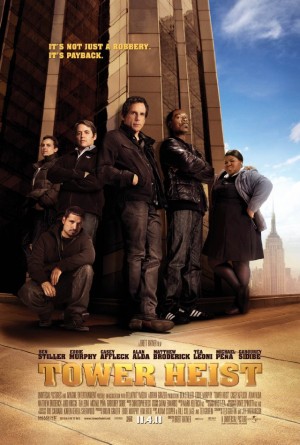 SYNOPSIS: Ben Stiller heads up a group of hard working employees at a posh Manhattan high-rise. But when they learn they’ve fallen victim to a wealthy businessman's Ponzi scheme, the group conspires to rob his penthouse residence.

Sex/Nudity: Several sexual references, including "screwing," "balls," "t*ts,” “t*tties,” and talk of prostitution, making out, banging, and getting lucky. One scene involves Gabourey Sidibe’s character coming on to Eddie Murphy in a slyly seductive way. A few scenes of women in tight-fitting clothes with cleavage.

Violence/Gore. A high-speed chase involves guns firing and cars speeding through the streets of New York. A man is “clotheslined” by an FBI employee while running after a car. A Tower employee rams a man with a utility cart after her attempts to poison him fail. A man vandalizes a high-priced car in rage. Characters swear at each other, and one attempts suicide unsuccessfully. Despite all the action and peril, no one is seriously hurt.

Drugs/Alcohol: Some social drinking in a bar. A woman gets drunk while at a pub with a guy she likes.

Which Kids Will Like It? Kids 14 and older who like Ben Stiller and/or action comedies. Much of the PG-13 content comes from Eddie Murphy, but it’s somewhat mild compared to his stand-up routines.

Will Parents Like It? Need an escape? Tower Heist is the perfect getaway.

REVIEW: Well, darn. I was just about to give Tower Heist high marks when news came out about director Brett Ratner’s recent interviews that offended several groups of society six ways to Sunday. But you know what? It’s still a great movie, so I’ll separate the director from the film and forge onward.

It’s refreshing to see a really great action comedy that doesn’t rely too heavily on vulgar humor (especially given those interviews!). Yes, there’s some of that humor in Tower Heist, but it’s not the main thing. The ripped-from-the-headlines-Ponzi-plot is focused on the characters and how they interact with each other during a big crime caper. And the writing is just superb, especially Matthew Broderick’s deadpan delivery for his down-and-out character Mr.  Fitzhugh.

Fitzhugh is just one of the hard-working people who live or work in a posh Manhattan high-rise (played by Trump Towers) who’ve lost their money thanks to the shady investments of Arthur Shaw (Alan Alda, who plays a really good bad guy). The glue holding everyone together is the building manager Josh Kovacs (Ben Stiller), who plays online chess with Shaw and was also the one who enlisted him to handle everyone’s money.

But when Shaw is accused of fraud, Kovacs realizes that they’ve all been duped, their money gone forever. The next logical step is, how they can get it back? Will justice be served? And will Kovacs’ budding romance with FBI agent Claire (Tea Leoni) get in the way?

I’d say this movie is a great escape – for both the moviegoers and the actors – but it’s really not, given the fact that the story is ripped from the Bernie Madoff headlines and the streets of Occupy Wall Street. But with its “stick it to the man” element, excellent writing team (including Ted Griffin, a writer on Matchstick Men, Ocean’s Eleven, and FX’s Terriers), and sparkling chemistry among the cast, it’s a winner.

Eddie Murphy plays a small-time crook whom Kovacs enlists to pull of the big heist and get their money back. Gabourey Sidibe is a tough-as-nails maid who knows how to crack a safe, and Tower employees Casey Affleck, Michael Pena and Stephen McKinley Henderson (the perfect doorman) round out the cast. It’s also great seeing Judd Hirsch as Kovacs’ boss at the Tower.

We also have the fun of watching the crime unfold during the hectic Macy’s Thanksgiving Day parade in New York City. AND watching all of that play out during a major stunt involving a 1963 Ferrari once owned by Steve McQueen. Oh, and I almost forgot the French Connection-type car chase underneath the elevated train tracks. Brilliant.

All in all, Tower Heist is a fun and timely caper, and you’ll be glad you saw it. Note that it’s rated PG-13, but because of the sexual references and language, I recommend it for kids 14 and older.