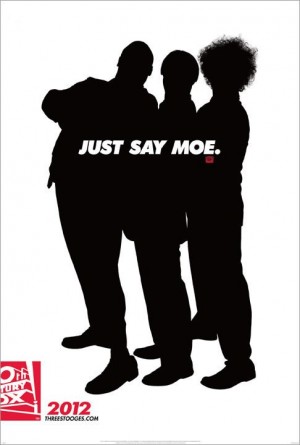 SYNOPSIS: This big screen adaptation of the classic TV series finds Moe, Larry and Curly trying to save their childhood orphanage. In the process, they stumble into a murder plot and wind up on a reality TV show. In other words, just another day for the Three Stooges.

Sex/Nudity: A female character wears skin-tight outfits with lots of cleavage. In one scene, while hoisting a man over a wall, he steps on her breast and it honks. A married woman is having an affair (at a hotel called the Filander Inn) and hires the Stooges to kill her husband. A pretty nun appears in a revealing swimsuit. Brief shots of a man's bare bottom and a lion's testicles.

Violence/Gore: Plenty of pratfalls and slapstick violence, including poking, punching, jabbing, pushing, falling off roofs, and hitting with hammers, mallets and other objects. Moe takes a chainsaw to Curley's head, and a person is run over by a bus for laughs (though, frankly, it's more shocking than funny). The Stooges accept a job to kill a man and make comical attempts but don't succeed. Moe inflicts beatings on the cast of Jersey Shore, including poking Snooki in the eyes. A mean character suffers multiple wounds and is shown with casts and bandages. The Stooges have a fight with peeing babies in one scene (one of the more bizarre movie scenes ever).

Profanity: Insults like "moron," "stupid," "shut up," and Jumbotron" (referring to a large person).

Drugs/Alcohol: A salmon is shown with an unlit cigar in its mouth.

Which Kids Will Like It? Kids 9 and older who like slapstick comedy or the original Three Stooges.

Will Parents Like It? The three leads have all the right moves, wordplay and timing, but the story falters at every turn.

REVIEW: I was never a big Three Stooges fan. It's easy to jump to the conclusion that it's more of a guy thing, but I know women who like them, too, so that theory doesn't hold up. I'm just missing the chip that finds humor in hurting people funny.

Oh, I know. It's just comedy. And behind all the eye poking, head smashing and catapulting, you can tell the Stooges genuinely care for each other. But I'd much rather see a comedy where the writing is smart and the characters interact with each other in subtle ways. Think Cary Grant and Ann Sheridan in I Was a Male War Bride. Funny, physical, snappy banter, a motorcycle with a sidecar, and a close encounter with a waterfall. Classic stuff.

But back to The Three Stooges, which I'll attempt to review with an open mind. From a stunts perspective, it's fantastic. Chris Diamantopoulos (Moe), Sean Hayes (Larry), and especially Will Sasso (Curly) not only have all the right moves, but also great timing. It's easy to watch this movie and feel like you're watching the real-life Moe Howard, Larry Fine and Curly Howard in the original shorts from the 1930s and 40s.

This movie is also formatted like the original shorts. It's divided into three chapters featuring cute title sequences and that familiar Stooges theme song preceding each chapter. Nice way to pay homage to the classic series and characters.

It's the storyline where things start to fall apart. I realize that when you're talking about the Three Stooges, you're probably not going to have a heavy-duty story that takes home an Oscar for best screenplay. I'm guessing they wanted moviegoers to focus on the physical stunts rather than the story, which revolves around the Stooges heading to the big city to raise enough money to save their childhood orphanage.

Things go south when they get involved in a murder plot and Moe lands a role on the reality show Jersey Shore. Whether that plot is designed to peg Snooki, The Situation and the rest of the gang as stooges, I have no idea. You make the call.

This movie also got me thinking about whether Stooges humor works in our modern world. My feeling is that a chainsaw to the head and someone getting run over by a bus doesn't play as well in 2012 as it did in 1935. A recent Twitter discussion with a friend delved into whether movies like this should include a disclaimer. In fact, this one does. At the end of the movie, studly guys Antonio Sabato, Jr. and Justin Lopez appear with a don't-try-this-at-home-kids message, complete with spongy hammers and break-away props. The fact that they're portraying directors Bobby Farrelly and Peter Farrelly is perfect.

I guess The Three Stooges qualifies as a family movie (though I was surprised when I first heard it was rated PG). Their goal of saving the orphanage is virtuous, and when Moe is adopted as a kid, he tries to bring Larry and Curly along with him.

But the good messages are leveled out when the Stooges' violence hurts other people and they agree to murder a man for money (even though he's described as terminal and the money would go to the orphanage). Also, Sofia Vergara, playing the woman who hires them for the hit, is distractingly dressed with non-family-friendly skin-tight outfits. Her boob honks at one point, too. Yes, you read that right. It honks.

Even with all that, The Three Stooges is goofy fun, and the kids in the theater where I saw it laughed a lot. The rest of the cast is terrific, including Jane Lynch as Mother Superior, Kate Upton as Sister Bernice, Jennifer Hudson as Sister Rosemary (yes, she sings in one scene), Brian Doyle-Murray as Monsignor Ratliffe, and Stephen Collins and Carly Craig as a couple looking to adopt.

Perhaps the best casting is Larry David as the mean-spirited Sister Mary-Mengele. Despite my earlier reservations about the slapstick violence, there's something heartwarming about seeing the socially awkward star of Curb Your Enthusiasm as a target for the Stooges' bumbling antics.