THE PIRATES! BAND OF MISFITS 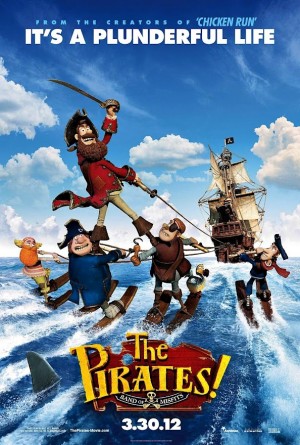 SYNOPSIS: Based on two books by Gideon Defoe, this cute stop-motion movie from Aardman Animations follows a Pirate Captain (voiced by Hugh Grant) who's on a mission to defeat his rivals Black Bellamy (Jeremy Piven) and Cutlass Liz (Salma Hayek) for the "Pirate of the Year" Award. In the process, the captain learns what's truly important in life.

Sex/Nudity: References to "scantily-clad mermaids." Cutlass Liz is curvy with lots of cleavage (which the male pirates stare at during one saloon scene). Darwin has a crush on Queen Victoria (who's also curvy with cleavage) and says her bun "does it for him." The Pirate Captain flirts with a female at a pub. The "Surprisingly Curvaceous Pirate" is actually a woman who ends up in a tub (nothing is shown). References to an airship being a "massive lady magnet."

Violence/Gore: Includes guns, sword-fighting, fist-fighting, explosions and a few close calls, though no one is seriously injured or killed. A character nearly gets his head cut off with a cleaver before being pardoned. A pet bird is threatened and nearly killed and eaten. The Queen is subdued in order to save the bird. "I hate pirates" is written on the Queen's crest. The Queen is part of a secret society that eats rare creatures, which might be disturbing to little ones (and big people, too).

Profanity: Infrequent use of "hell," "crap," and "ass," and insults like "stupid" and "idiot."

Drugs/Alcohol: Ale, wine and other drinks are served at social gatherings and pubs. The Pirate Captain gets drunk with Charles Darwin and his friends.

Will Parents Like It? This movie is really cute and fun, though some of the jokes and themes will probably go over the heads of little ones.

REVIEW: In some ways, I'd like to give The Pirates! Band of Misfits two ratings: one for creativity and one for kid appeal. While I'm all for weaving science into any family movie, I'm not sure little ones will grab onto the concepts of Charles Darwin.

Also, a few scenes might be disturbing to kids, like the main character nearly getting his head cut off with a cleaver, a pet bird who's nearly killed and eaten, and a secret society of people who eat rare and endangered creatures.

Now I realize that Darwin, while studying at Cambridge, was a member of the Glutton Club, which involved eating unusual creatures such as owls and parakeets. Still, it's a little disturbing in this format, especially one scene where all the cute animals, including a sweet panda, are shown huddled in a room together awaiting the chopping block.

But overall, the story is amazingly inventive and confirms that stop-motion animation is still a welcome player in family movies. I should add that while the film is primarily stop-motion, much of the scenery was computer-generated animation. The story is also based on a couple of books (never a bad thing) by Gideon Defoe: The Pirates! In an Adventure with Scientists and The Pirates! In an Adventure with Whaling.

It's also nice to see Hugh Grant return to theaters (well, his voice anyway). My guess is it took him three years to recover from 2009's Did You Hear About the Morgans?. Here, he voices the Pirate Captain, a salty seafarer who has entered the prestigious "Pirate of the Year" contest for 20 years straight. He always loses because his crew prefers simple pleasure like "Ham Nite" ("It's like a meat ballet!") rather than the hardcore looting, deadly diseases, and "scantily-clad mermaids" pirates are known for.

But when the other contenders for the 1837 award -- Cutlass Liz (Salma Hayek), Black Bellamy (Jeremy Piven), and Peg Leg Hastings (Lenny Henry) -- poke fun at the Pirate Captain, he takes it personally and embarks on an aggressive campaign to storm the other ships.

When the captain storms the ship of scientist Charles Darwin (David Tennant), he's informed that his pet parrot is actually a thought-to-be-extinct Dodo. Darwin convinces the captain to dock in London so the bird can win untold riches at an annual science conference. Alas, when Queen Victoria (Imelda Staunton) gets wind of it, she plots to nab the bird for her own nefarious reasons.

The Pirates! Band of Misfits has the same signature look as Aardman Animations' other films like Chicken Run and the Wallace & Gromit franchise, as well as the same delightfully wacky and somewhat twisted humor. Who knew Queen Victoria was such a homicidal maniac?

Tennant's Darwin is cunning and mad for power (which, from what I've read, is in keeping with the naturalist's real-life personality). But the scene stealer here is his trained butler, a monkey called Mr. Bobo who communicates by holding up a series of cue cards a la Bob Dylan singing "Subterranean Homesick Blues."

This movie has some good takeaway messages about loyalty, friendship, family, what happens when vinegar and baking soda are mixed, and doing the right thing in the face of danger. And the ragtag crew of the ship stand by the captain, even when he betrays them.

Good stuff, especially combined with the fact that this movie just looks different from all the other CG-animated family movies in theaters these days. It's nice to see filmmakers putting some effort into it. Also, any family movie that works in The Clash singing London Calling is ok by me.