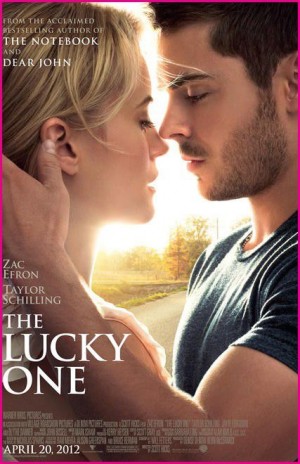 MPAA Rating: PG-13 for some sexuality and violence

Directed by: Scott Hicks; based on a book by Nicholas Sparks

SYNOPSIS: This super-steamy adaptation of Nicholas Sparks' novel stars Zac Efron as a Marine who's adrift after serving three tours in Iraq. Back in the U.S., he searches for a woman (Taylor Schilling) he believes was his good luck charm during the war, and finds her running a doggy daycare business in North Carolina.

Sex/Nudity: Lots of steamy scenes for a PG-13 movie. A male and female kiss passionately under the running water of an outdoor shower (they're clothed). Indoors, they remove each others' clothing (no private parts are shown). Sex is implied in several scenes. A female moves her hand down the back of a man's pants.

Violence/Gore: War scenes include gunfire, explosions and some blood; soldiers and innocent bystanders die via gunfire. A physically and verbally abusive man stalks his ex-wife and threatens her when she doesn't give into his demands (though she later stands up to him). A man gets into a fight with another man and pulls a gun on him. One tense scene shows people – including a child – falling into a raging river during a storm. A man dies after a treehouse falls on him in the river.

Drugs/Alcohol: Adults drink on dates and at social events. A male character with anger and jealousy issues gets drunk and starts a fight with another man. A female character gets a little tipsy on a date.

Which Kids Will Like It? Kids 15 and older who like romantic dramas or Nicholas Sparks books and movies like Dear John, The Notebook and The Last Song.

Will Parents Like It? There's a lot of sexy stuff for a PG-13 movie, which is why I don't recommend it for kids younger than 15. But the story follows the same format as other Nicholas Sparks movies – heavy on the romance, drama and tragedy. It also suggests that women aren't complete without the love of a good man, and is that a message we want to send to our girls?

REVIEW: There are several things you can count on with a movie based on a Nicholas Sparks book. It's going to include two handsome people who are drawn to each other, despite being confronted by obstacles and personal issues. There's going to be a horrible tragedy that will either throw them together or tear them apart forever. And there's going to be a stunning house, amazing locale, or water of some sort -- the ocean, a river, a rainfall or a shower, usually with the main characters kissing in it.

The Lucky One has all of these elements. Does that make it a bad movie? No, it makes it a Nicholas Sparks movie. You know going into it what you're going to get. That's why people love Nicholas Sparks books and movies. There are no surprises here, and moviegoers who love this stuff will love The Lucky One.

But here's the thing. Nicholas Sparks movies are schmaltzy and manipulative in a tear-jerker way, which is why I've shunned them through the years. But something about The Lucky One is making me think I could become a huge Nicholas Sparks fan. Maybe it's the fact that my kids are growing up, my life is pretty much the same day after day, and when you've been married to the same person for 30 years, any "sparks" (pun intended) are often doused by mortgage payments and car repairs. Or, maybe the husband and I just need a weekend getaway! Either way, The Lucky One is a love story that plays all the right romantic notes.

Zac Efron plays Logan Thibault, a Marine who returns from his third tour of duty shell-shocked from several close calls. After a face-off with the enemy that left many dead, Logan stops to pick up a dusty photo on the ground. Pictured is a lovely young woman (Taylor Schilling) with a stay-safe message written on the back, and Logan immediately claims her as his good luck charm.

Upon returning home, he seeks out the woman, named Beth, and finds her in North Carolina running a doggy daycare business with her mom (Blythe Danner) and son (Riley Thomas Stewart). Unable to tell Beth why he's there, Logan takes a job with them and ends up falling in love with Beth.

Of course, there are obstacles (see Nicholas Sparks notes above). Beth has an abusive ex-husband (Jay R. Ferguson – you might recognize him as Stan Rizzo on Mad Men) who is not about to let Logan waltz into her life without a fight (figuratively and literally).

If you like Nicholas Sparks books or movies, you'll like The Lucky One, despite the fact that the acting is a little stilted in spots and the dialogue hokey. I will say, though, that the sexy stuff really pushes the PG-13 envelope. Efron and Schilling have great chemistry, but the filmmakers stop just short of an actual sex scene, which is why I don't recommend it for kids younger than 15.