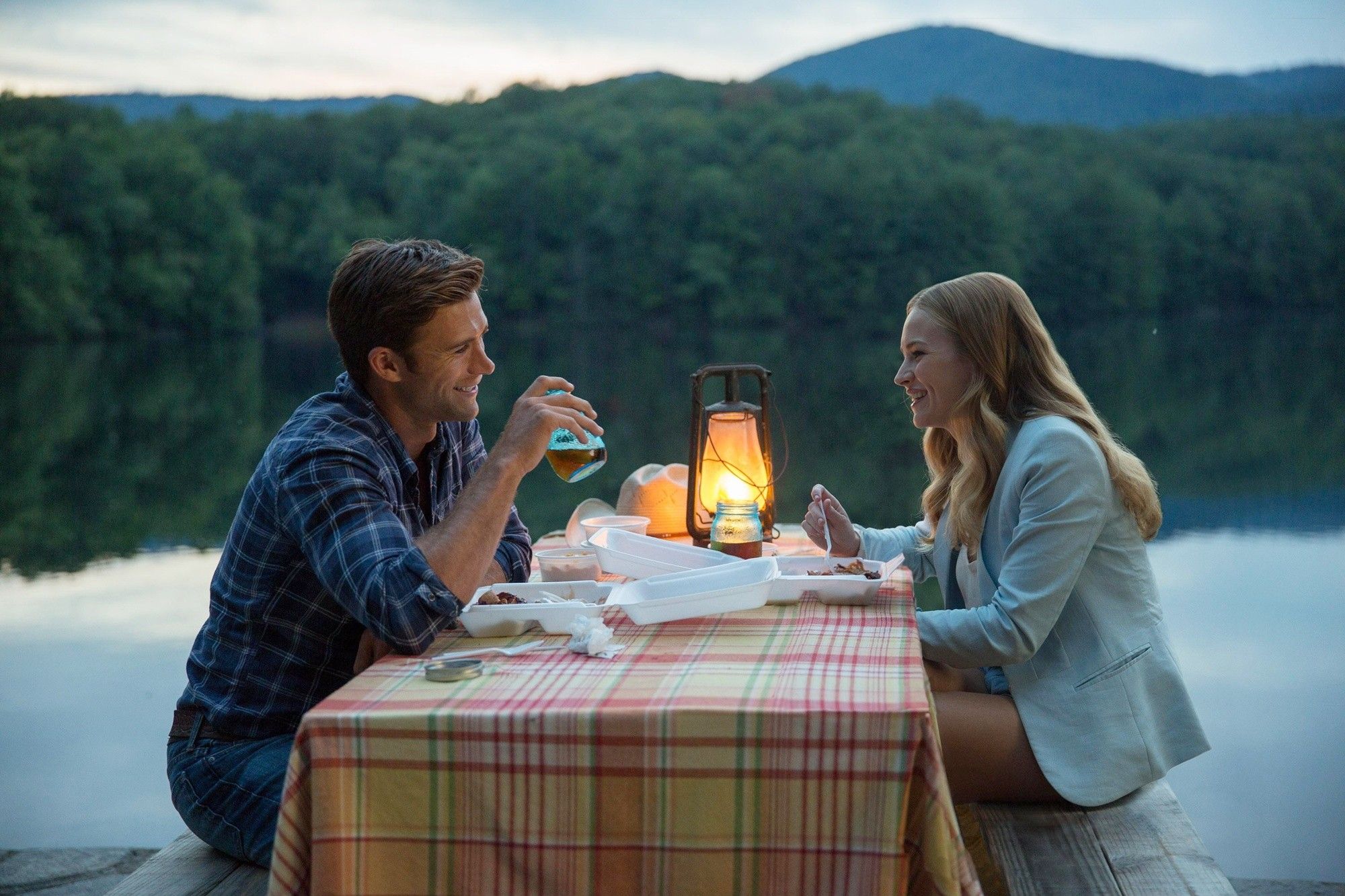 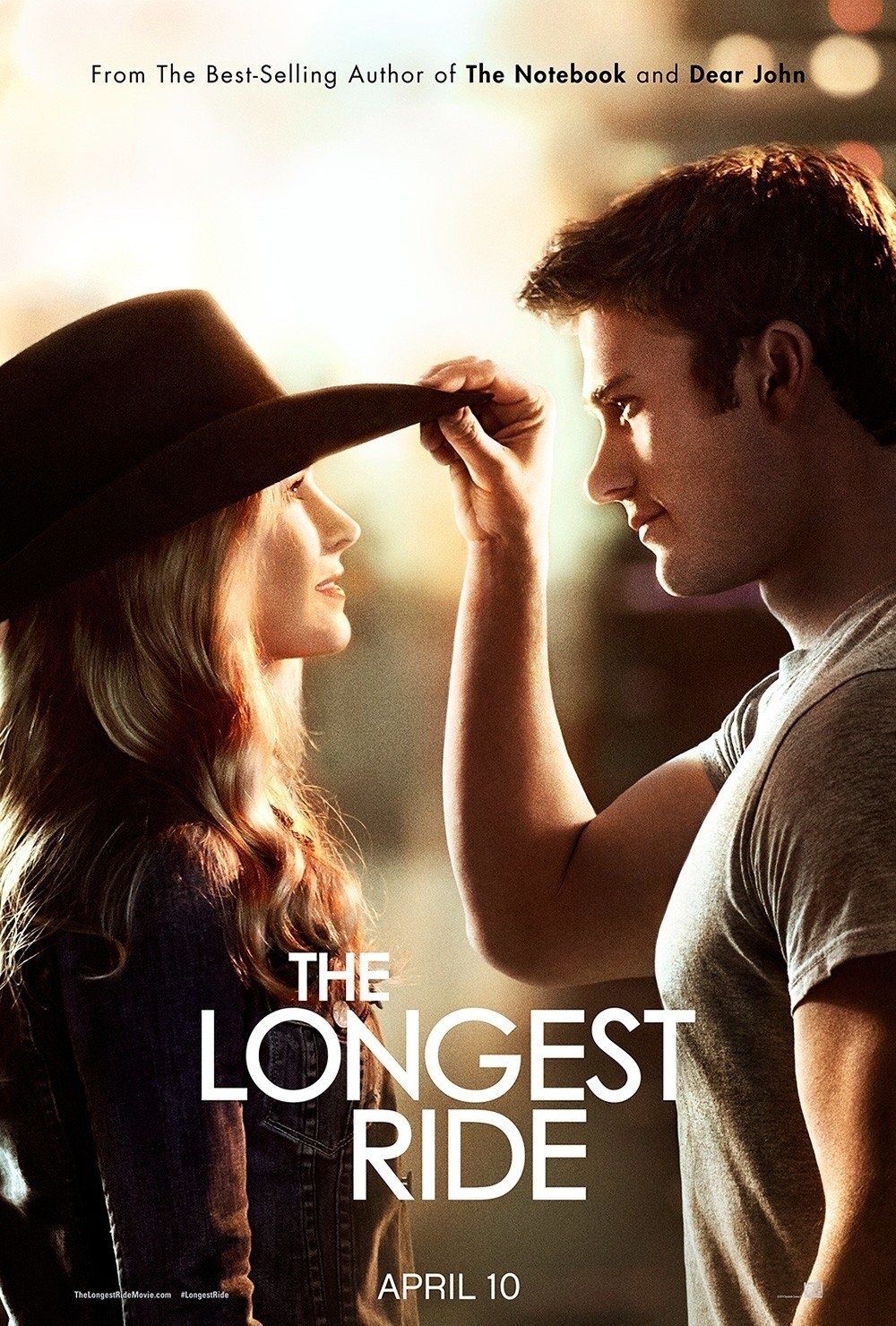 SYNOPSIS: A young couple ponder their future together after they cross paths with an older man looking back on his decades-long romance with his beloved wife.

REVIEW: Horses, romance and Nicholas Sparks. What could be better? If you love Nicholas Sparks, that is. It took me a long time to really get my head around the Nicholas Sparks brand -- you know, stories full of romance, drama, heartbreak, couples struggling to stay together as outside forces threaten to break them apart...

But something inside me finally accepted these stories into my heart (yes, I realize how cheesy that sounds), and now I really like them. Well, some more than others. "Nights in Rodanthe" and "The Best of Me" frustrated the heck out of me. I liked the movies overall, but didn't like the endings. Those of you who've seen them know how they end. I didn't see "Dear John," but my daughter said she wept through it. But "The Longest Ride"? Definitely my favorite Nicholas Sparks movie to date. I like it as much as "The Notebook"!

The story centers on a young couple in North Carolina whose paths cross at exactly the wrong moment in their lives. Luke Collins (Scott Eastwood, who has his dad Clint's good looks and manly-but-tender demeanor) is a champion bull rider who's just getting back into the game after a serious injury. Despite the risks, he continues bull-riding to help pay for the ranch where his mom still lives.

Sophia (Britt Robertson, who wow'd me in "Cake" and can also be seen in the upcoming sci-fi thriller "Tomorrowland" with George Clooney) is a college student about to embark on her dream job in New York City’s art world. She's leaving in two months, so this relationship won't go anywhere, right?

As Luke and Sophia ponder their future together, their lives suddenly intertwine with an older man, Ira (Alan Alda), who is looking back on a long romance with his beloved wife Ruth (Jack Huston and Oona Chaplin - Charlie's granddaughter - play the younger Ira and Ruth in flashbacks). As Sophia reads Ira's love letters to the aging man, we see parallels in their love stories.

"The Longest Ride" is similar to other Nicholas Sparks movies, in that there's nothing too surprising here, but it's still a compelling story. Maybe it's because the two leads are not only gorgeous, but they have good chemistry. Or maybe it's because Alan Alda is the elder romantic here. I mean, who doesn't love Alan Alda?

My 17-year-old daughter saw this movie with me, and she just about flipped out when I pointed to the screen and said, "That's Hawkeye from MASH." She couldn't believe it! But I'm so glad he's continued to work through the years, because there's no one like Alan Alda.

And maybe it's because of the enduring and timeless message of this movie -- that love conquers all. And while you don't know what the future will bring, if you commit to love someone til death do you part, things have a way of working out. My goodness, I've caught the Nicholas Sparks fever!

THE DETAILS (May Contain Spoilers):
Sex/Nudity: A woman undresses before showering as a man watches. They begin kissing and it's presumed that they have sex in the shower. Other scenes show them in bed together. Not much nudity, although bare backsides are shown.

Violence/Gore: An experienced bull-rider is thrown and severely injured, both in flashbacks, online videos, and present time. A man is shown unconscious and bleeding at the wheel of a car that's crashed along the road.

Drugs/Alcohol: Characters, including college students who appear to be of legal age, drink socially at bars. A college student gets falling-down drunk and has to be driven home.

Which Kids Will Like It? Kids aged 13 and older who like romantic dramas or Nicholas Sparks movies.

Will Grownups Like It? "The Longest Ride" is a solid romance that follows the typical Nicholas Sparks storylines of drama, heartbreak, and couples working against the odds.

JANE’S REEL RATING SYSTEM:
One Reel – Even the Force can’t save it.
Two Reels – Coulda been a contender
Three Reels – Something to talk about.
Four Reels – You want the truth? Great flick!
Five Reels – Wow! The stuff dreams are made of.
Jane Boursaw is the film critic and editor-in-chief of Reel Life With Jane. Contact her at jboursaw@charter.net and check out the shop for fresh editorial content. Images in this review used courtesy of 20th Century F Back To Top