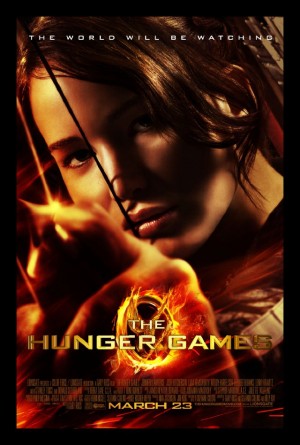 Genre: Action, Drama, Sci-Fi, Thriller, Teens, Based on a Book

SYNOPSIS: Based on the book by Suzanne Collins, The Hunger Games is set in a post-apocalyptic future where a boy and a girl are selected from each of 12 districts to fight to the death on live television. When young Primrose Everdeen is selected as the District 12 "tribute," her 16-year-old sister Katniss volunteers to take her place.

Sex/Nudity: Peeta admits he's had a crush on Katniss since they were kids. They kiss a couple of times, once somewhat passionately. It's implied that Katniss' childhood friend Gale is also smitten with her.

Violence/Gore. The whole premise of The Hunger Games is based on violence and death involving children in a televised pageant. Twenty-four kids aged 12 to 18 are selected to participate in a bloody reality show-type contest in which there is only one victor. There's a sense of peril as the kids are chosen and prepare for battle during practice sessions with weapons and deadly skills. Once the Games start, there's an immediate bloodbath involving fighting and weapons, and several kids are killed. We see the bodies, but the camera doesn't linger on them. The contest continues with kids dying from spears, arrows, knives, poisonous berries, head-bashing, neck-snapping, and deadly "tracker jackers" and dog-like creatures (genetically engineered insects and beasts). The Gamemakers create situations to kill off characters, including a fire with fiery projectiles aimed at Katniss, who is badly burned. Peeta suffers a nasty knife wound. Riots take place in the districts, and government forces subdue people. We also see gory footage from earlier Games.

Drugs/Alcohol: Haymitch, a former victor who's mentoring Katniss and Peeta, is often drunk and seen with a drink in his hand during the first part of the movie (though he gains focus as the Games begin). Adults and teens drink various beverages at dinner and party scenes.

Which Kids Will Like It? Kids 13 and older who like sci-fi thrillers involving teens or who've read the book or trilogy by Suzanne Collins (The Hunger Games, Catching Fire and Mockingjay).

Will Parents Like It? The PG-13 rating is definitely pushed to the limit, but this is a well-done film that follows the book fairly closely given the 142-minute limitations.

REVIEW: I'm conflicted about The Hunger Games. It's a gripping, emotional movie with thoughtful characters and good special effects, and yet ... you can't overlook the fact that it's a story about children being forced to kill other children while their friends and family watch. It doesn't get much worse than that in the big scheme of tragic possibilities.

But I believe that's precisely why the Suzanne Collins books are so popular, and why the movie grossed more than $153 million its first weekend. No one wants to see kids kill other kids. It's tragic, brutal, inhumane and unthinkable. It's like that proverbial train wreck from which you can't look away.  But perhaps stories like this will save our world in some distant, post-apocalyptic future where humans are treated like savages and kept alive for their ability to produce resources needed by evil leaders.

When I read The Hunger Games trilogy last summer, I didn't expect to like it, for all the reasons mentioned above. Instead, I was immediately obsessed and read through the entire series in record time. I can't remember the last time a book series affected me that way, and it's because the characters aren't distant strangers you've never seen or heard of. They're you, me, our friends and family, and you hope that we'll all have the integrity and determination of Katniss and Peeta if facing a similar fate.

The story takes place in a not too distant future in which the United States, weakened by drought, fire, famine, and war, has collapsed and been replaced by Panem, a country divided into a Capitol and 12 districts, with each district producing something of value to the Capitol. Each year, two young representatives, aged 12 to 18, from each district – 24 kids total -- are selected by lottery to participate in The Hunger Games. Yes, the similarities to Shirley Jackson's short story, The Lottery, are not lost on me.

The kids then train and fight in The Hunger Games, a competition which takes place in a large arena of woods, hills, rivers and forests, as well as genetically engineered creatures like the lethal tracker-jacker insects and ferocious dog-like beasts controlled by the Capitol. All the citizens of Panem are required to watch via live television, and there can only be one victor. Of those 24 kids, only one will survive.

When young Primrose Everdeen (Willow Shields) is selected as District 12's female representative, her 16-year-old sister Katniss (Jennifer Lawrence) volunteers to take her place. Katniss is an expert archer who hunts the animals in her district with childhood friend Gale Hawthorne (Liam Hemsworth). Selected as the male representative is Peeta Mellark (Josh Hutcherson), the son of the town baker whose only skill seems to be the ability to heft large sacks of flour on his shoulders.

Katniss and Peeta are pitted against bigger, stronger kids who've been training for The Hunger Games their whole lives. And yet, they're still kids who've been brainwashed to believe this is their calling, so even as they form alliances and friendships in the face of overwhelming odds, you still feel sympathy for them.

That's one of the reasons The Hunger Games is so compelling. Even though the plot is tense, dramatic and science-fictionish (though you have to wonder if our world will devolve to a similar fate at some point), the characters are completely realistic and behave in ways you'd assume people would behave in similar circumstances. Peeta, especially, talks of holding on to his humanity in this inhumane competition, thought Katniss confesses she "can't afford to think like that." She is entirely focused on survival, because she knows that her sister and mom depend on her for *their survival. Katniss' dad was killed in a mining accident years earlier.

But it's hard to have much sympathy for the leaders in the Capitol, particularly President Snow (Donald Sutherland), a cold, unfeeling soul who has no issues with pitting children against each other like gladiators fighting lions in a coliseum. The Capitol only wants to keep the citizens of Panem subdued and complacent.

You can see there are lots of social issues at play in The Hunger Games, but for me, it all comes back to the gripping story, realistic characters, perfectly-cast actors, excellent writing and production, all of which make this film a franchise that's poised to carry the torch lit by Twilight and Harry Potter.