THE AVENGERS: AGE OF ULTRON 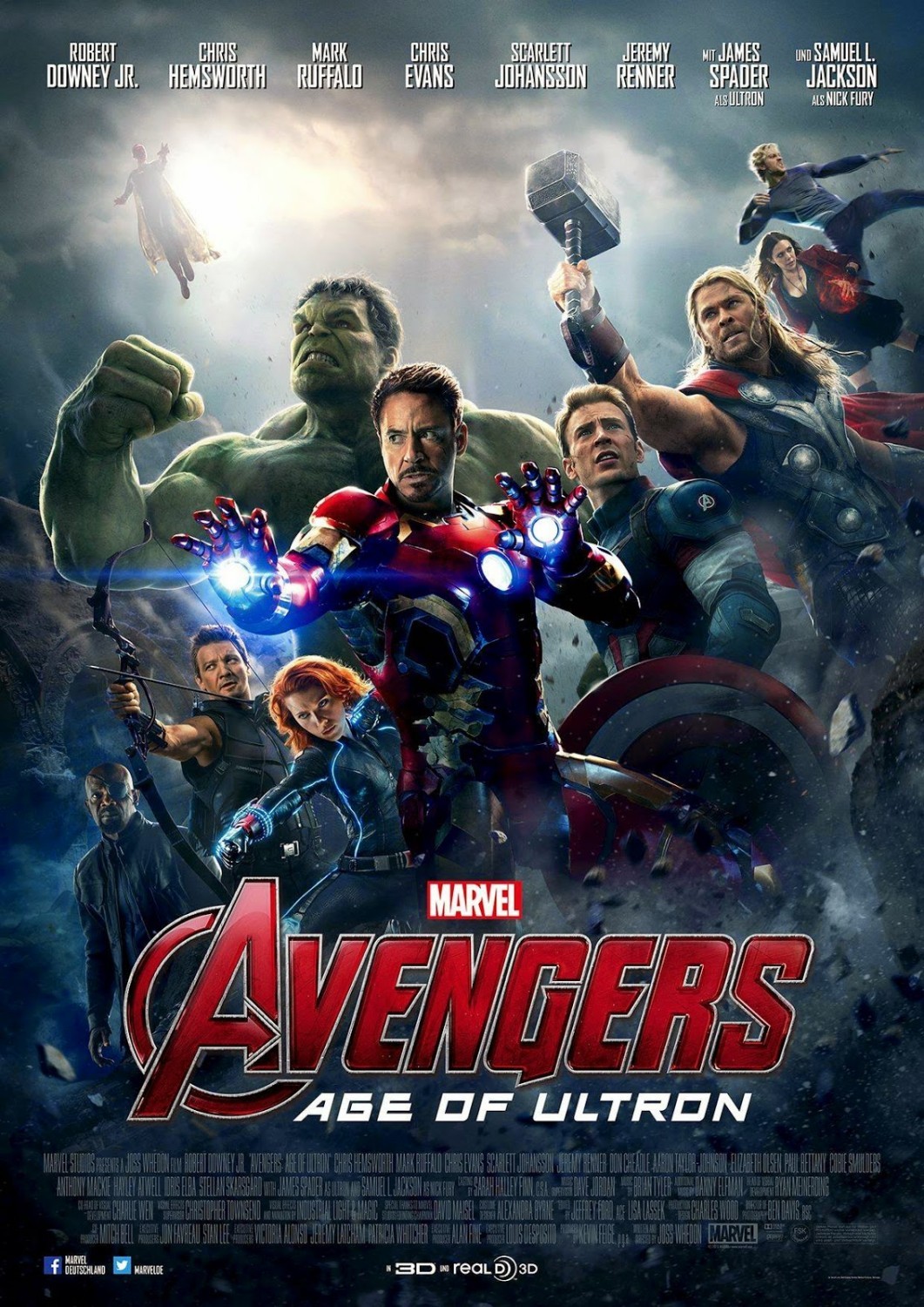 SYNOPSIS: When Tony Stark and Bruce Banner try to jump-start a dormant peacekeeping program, things go awry and it's up to the Avengers to stop the villainous Ultron from enacting his terrible plans.

REVIEW: I love seeing the Avengers back together! Under Joss Whedon's direction, they're a lot of fun, and it's neat to see such a long-standing Marvel team continue their big-screen awesomeness.

This follow-up to 2012's "The Avengers" (also directed by Whedon) finds genius inventor Tony Stark, aka Iron Man (Robert Downey Jr.), inadvertently creating a form of artificial intelligence indicating that the world's problems are all self-
inflicted. Ultron (voiced by James Spader), as the super-smart android is known,
delivers a simple solution: Destroy humanity.

Ok, first of all, I find it amazing that even though we never actually see James
Spader on screen, he's SO DEFINITELY THERE. That lilting voice, comical head tilt,
and philosophical outlook we've come to know and love in his Raymond "Red"
Reddington character on NBC's "The Blacklist" are all present here. Even though
he's an android.

I also love that even though there are a lot of characters in this movie, each of the
Avengers gets their time to shine. There's romance, comedy, drama and, of
course, lots of action and battle scenes. The snappy dialogue is what we've come
to expect from Whedon (though, ok, it's not as good as "Buffy the Vampire
Slayer" or "Firefly," but look, we only get 142 minutes here).

That said, 142 minutes isn't a lot of time to flesh out any storylines or
relationships, so the movie is mainly high-action battle scenes dotted with quieter
moments to push the plot forward.

Still, there's plenty to love here for fans of the movies and comic books. It
probably helps to be a fan who's already familiar with the new characters in this
movie. And it would probably be good for me to see it again, now that I know
who's who.

THE DETAILS (May Contain Spoilers):
Sex/Nudity: Some flirting and banter. Couples kiss. A few sexual innuendoes and form-fitting outfits/cleavage shots.
Violence/Gore: Comic book violence throughout includes destructive mayhem, imploding buildings, flying missiles, and a high body count (all cartoonish - no bloody gore). Characters are shot and die (including one sad death), skyscrapers are reduced to rubble, children are sometimes in the line of fire. Weapons include guns, hammers, shields, arrows and bombs.
Profanity: "S--t" is the first word of the movie, but the character who says it is comically reprimanded. Also "ass," "hell," "damn," "bastard" and "son-of-a-bitch."

Drugs/oAlchol: Adults drink to celebrate victories.
Which Kids Will Like It? Kids aged 13 and older who liked the first "Avengers" movie or characters.
Will Grownups Like It? This is a fun movie for both kids and grownups.

JANE’S REEL RATING SYSTEM:
One Reel – Even the Force can’t save it.
Two Reels – Coulda been a contender
Three Reels – Something to talk about.
Four Reels – You want the truth? Great flick!
Five Reels – Wow! The stuff dreams are made of.
Jane Boursaw is the film critic and editor-in-chief of Reel Life With Jane. Contact her at jboursaw@charter.net and check out the shop for fresh editorial content. Images in this review used courtesy of Disney.