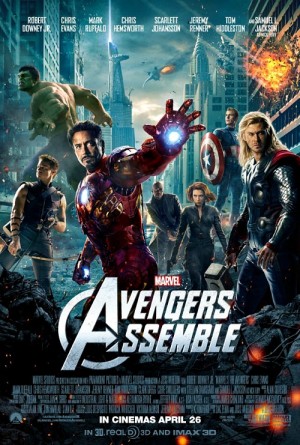 MPAA Rating: PG-13 for intense sequences of sci-fi violence and action throughout, and a mild drug reference

SYNOPSIS: When the earth is threatened by demigod Loki and his thugs, S.H.I.E.L.D. director Nick Fury and his dysfunctional team of Avengers assemble to save the world from disaster.

Sex/Nudity: Some flirting between Black Widow and other Avengers. She wears a form-fitting costume. After the Hulk falls through a building, he transforms back to Bruce Banner and it's implied that he's naked, though nothing is shown.

Violence/Gore: Not much gore or blood, however lots of explosions, fighting, and weapons, including guns, arrows, bombs, shields, and more. Mayhem ensues on earth, with people running everywhere, buildings destroyed by creepy giant aliens, armies obliterated by lasers, cars flung from bridges and the like. The Hulk is menacing and tosses people about willy-nilly. Nuclear weapons are discussed, and a secondary character dies.

Drugs/Alcohol: A character mixes a drink for himself. Some champagne toasts. A brief reference to "weed."

Which Kids Will Like It? Kids 12 and older who like superhero comic books or movies, or the previous Avengers movies, like Thor, Captain America: The First Avenger, Iron Man., and The Incredible Hulk.

Will Parents Like It? It's very entertaining, and despite the PG-13 rating, I think it's ok for kids 12 and older. The violence is very comic-book-like, and not much blood is shown.

REVIEW: Maybe the world needs a superhero movie right now. Maybe director Joss Whedon has a huge fanbase. Maybe we just love the Avengers. Whatever the reason, The Avengers opened to a record-breaking $207 million over the weekend, making it not only the highest grossing weekend in cinematic history, but also the fastest to cross the $200 million mark. And that's just in the U.S. The film opened internationally ten days ago, which brings the its global box office haul to a crazy $648 million.

What can I say? The Avengers is just a fun movie with smart writing, an all-star cast, familiar characters, an interesting story, a villain we love to hate, and a director who's built his massive fan base with TV shows like Buffy the Vampire Slayer and Firefly. Those folks are rabid! And I'm one of them! And if you haven't yet watched those shows, no time like the present.

But back to The Avengers. Over the past few years, we've been getting movies based on individual Avengers characters: Thor, Captain America: The First Avenger, Iron Man and Iron Man 2, and The Incredible Hulk.

In The Avengers, all of these individual characters "assemble" (that's the tagline: "Avengers Assemble") to fight a powerful demigod named Loki (Tom Hiddleston) who's come to Earth in search of the Tesseract, a mysterious artifact that holds limitless energy. There's a ton of backstory with these comic book characters, but just stick with me.

Collectively, they're known as the Avengers, even though they act more like a dysfunctional family in need of a good therapist.

That's pretty much it for the storyline – the Avengers trying to thwart Loki and his intergalactic thugs. But the fun thing about this movie is the characters, all of whom are fleshed out and dealing with their own issues. Iron Man doesn't play well with others. Thor has brother issues (Loki is his brother), Hawkeye is compromised by the enemy, Captain America just wants to be in charge, and when the Hulk gets angry, he turns into a big green monster who smashes everything in his way.

The writing is smart and snappy – Robert Downey Jr. has some hysterical lines – and there are little Easter eggs here and there, like comic book god Stan Lee showing up for a brief cameo. And even as the Avengers are squabbling among themselves, they're fighting for truth and justice. Everyone can get onboard that.

And it's clear that Whedon knows how to build a compelling story with complex, flawed, conflicted characters, as he's done so many times on TV. There's a bit of extended setup at the beginning, which is probably needed for those who don't know the individual characters or their movies. And the Tesseract is sort of forgotten amidst all the other stuff.

But there's a strong takeaway message for kids: teamwork is everything. With each of their individual talents and skills, the Avengers are stronger together than apart, and they work to overcome their challenges (of which there are many) for the greater good.

Oh, yeah, as with the other Avenger movies, we're rewarded at the very end with a couple of key scenes. Stay through ALL the credits. There's a short bit after the initial credits and another bit at the very end. Well worth a couple extra minutes in the theater.