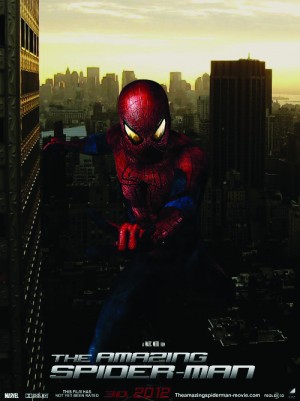 MPAA Rating: PG-13 for sequences of action and violence

SYNOPSIS: This reboot of the Spider-Man franchise finds Andrew Garfield playing Peter Parker, the awkward teenager who transforms into a superhero after being nibbled by a genetically-enhanced spider. When Peter finds a clue about his parents' disappearance when he was a kid, it puts him on a collision course with Dr. Curt Connors, his father's former partner.

Sex/Nudity: A teenage boy climbs into a girl's room through the fire escape window. Some flirting and a few romantic kisses.

Violence/Gore: Some bullying among high school students. The usual action associated with a comic book superhero, including a menacing villain who throws Spider-Man around, threatens people, terrorizes people in cars on a bridge, etc. Spider-Man saves a child from plummeting to his death in a car. A man is mugged, leaving an innocent bystander bloody and dying. Spider-Man goes after other muggers who are outmatched and beaten badly. Cops use high-powered weapons on both Spider-Man and the villain, leaving Spidey injured and limping. A cop is impaled and badly injured by the villain's long claws.

Drugs/Alcohol: The villain injects himself with a powerful drug that turns him into a giant menacing lizard.

Which Kids Will Like It? Kids 13 and older who like Spider-Man/superhero comics and/or Andrew Garfield and Emma Stone movies.

Will Parents Like It? Yes, the PG-13 rating is on target, and the story has something for everyone, including teen romance, superhero action and family drama.

REVIEW: When I first heard that Spider-Man was getting a reboot, I was in the camp that wondered why. There are already been three Spider-Man movies, not to mention numerous TV shows and video games. Do we really need another Spider-Man movie?

Then I saw The Amazing Spider-Man and my tune changed. Yes, we did need a reboot, and Andrew Garfield is just the person to step into Tobey Maguire's webby suit. He's got the teenage angst down pat, not to mention great chemistry with co-star and real-life girlfriend Emma Stone, who plays plucky Gwen Stacy.

The Amazing Spider-Man is indeed an official reboot, as it takes us back to the origins of Spider-Man. As a youngster, Peter Parker was left with his Uncle Ben (Martin Sheen) and Aunt May (Sally Field) as his parents rushed hurriedly off. They never returned, and we're led to believe they died in a crash.

So Peter grows up without parents, although he has a good life with his wise and caring aunt and uncle. Still, the sting of his parents' abandonment haunts Peter, and he's the target of bullies at school, despite the fact that cute Gwen Stacy (Emma Stone) is on his side.

When Peter stumbles across his father's long-lost portfolio and secret files, he follows the clues to Oscorp, the lab where his scientist father once worked. Peter meets his dad's former colleague, Dr. Curt Connors (Rhys Ifans), and while snooping around the lab, comes across a mysterious room with a giant web of spiders being used for scientific purposes.

When a spider bites Peter, it transforms him into his new alter-ego, Spider-Man, a superhero who can stick to walls and ceilings, leap between tall buildings, spin web ropes, and wrap bad guys up in web cocoons until the cops get there. But the cops aren't all that happy with this vigilante, especially Gwen's dad Captain Stacy, played with just the right amount of attitude by Rescue Me's Denis Leary. But everyone will have to come together to fight a dangerous nemesis intent on destroying Manhattan.

What I love about The Amazing Spider-Man is that it's as much a human story as a superhero story. Peter Parker doesn't even don the famous red and blue suit until part-way through the movie, but the build-up is by no means slow and agonizing. Director Marc Webb (yes, I realize the irony of his name) sets up the story and introduces all the characters, so we get to know their individual stories and relationships first.

Then we have Peter discovering his newfound skills. At first, they're frightening and intense, but as he grows more used to them, they're fun and super-cool. And yet, even with the fantastical premise, the human drama makes the story seem like it could really happen. It's not all fast action, explosions and edge-of-your-seat thrills (though we get a good amount of those).

While I liked Tobey Maguire as the previous Spider-Man, Andrew Garfield brings his own brand of teenage angst and charm to the role. It helps that he has tons of chemistry with his co-star is real-life girlfriend Emma Stone, who plays Gwen Stacy. (You'll recall that Mary Jane Watson was Peter's love interest in the first movies.)

The Amazing Spider-Man has something for everyone: thrilling action, a sweet teen romance, some heavy family drama, and a charming superhero who has been around for five decades. Created by Stan Lee and Steve Ditko, he first appeared in the Amazing Fantasy comic book in August of 1962.

As with so many superhero movies lately, be sure to stay through the credits for a few clues about what's to come. The Amazing Spider-Man 2 is already in the works, scheduled for a 2014 release.