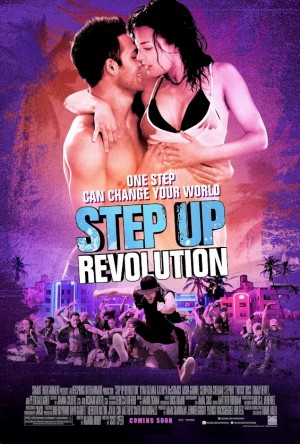 MPAA Rating: PG-13 for some suggestive dancing and language

SYNOPSIS: When Emily arrives in Miami with dreams of becoming a professional dancer, she sparks with Sean, the leader of a dance crew and flash mob whose neighborhood is threatened by Emily's father's development plans.

Sex/Nudity: This movie is filled with sexy dance moves, innuendos, shirtless guys, and girls in tight clothing with lots of skin showing. A 20-something guy and girl spend the night together on his boat, but it's implied that nothing happened. A few kisses.

Violence/Gore: In one confrontational scene, dancers wear gas masks and police vests and carry smoke canisters and billy clubs. A fistfight breaks out after an aggressive dance sequence. A father and daughter clash over her future. Flash mobs result in both angry people and others who love it.

Drugs/Alcohol: Some social drinking at bars and dance clubs.

Will Parents Like It? The dance moves are a little too sexy for a PG-13 rating, and the plot is as thin as a ballet dancer in training.

REVIEW: After last week's tragic theater massacre during a midnight screening of The Dark Knight Rises in Aurora, Colorado, I was ready for something light and breezy. Unfortunately, I didn't find it in Step Up Revolution. Oh the dancing is great and everyone is beautiful and amazingly fit. I just wish the movie played more like a feature film than a series of acts from So You Think You Can Dance or America's Got Talent.

Step Up Revolution is the fourth movie in the Step Up franchise, which has released a new film every couple of years since the original Step Up premiered in 2006. They all follow pretty much the same format. There's a guy and a girl, often from different sides of the track, who are thrown together in a situation that needs resolving. There's always a LOT of dancing. I guess by now, audiences realize they don't go to a Step Up movie expecting an Oscar-winning storyline. They're there to see beautiful people dance. Step Up Revolution is no different.

It stars Ryan Guzman as Sean, a handsome waiter in a high-end Miami hotel whose true passion is serving as co-leader of an underground dance crew known only as The Mob. They organize and choreograph very creative and usually illegal flash mobs around the city.

The flash mobs are so creative, in fact, that they involve things like low-rider cars with amazing mechanical capabilities, kids dancing on the roofs and hoods of cars that are (fortunately) stopped in traffic, a street artist who creates and finishes massive "Mob" artwork while the others are dancing, and large groups of kids dressed in impeccable suits who dance in lobbies of fancy places with money floating down around them. Where do they get the suits, fancy cars, money, and high-tech sound equipment? I have no idea.

The Mob's goal is to post video after video of their dance exploits on the Internet, because the first group to get 10 million hits wins $100,000. But wait, there's more. A girl named Emily (Kathryn McCormick, who came in third on season three of So You Think You Can Dance) arrives in Miami looking for her shot at stardom via a prestigious dance studio run by Olivia (Mia Michaels, a judge on So You Think You Can Dance).

Turns out that Emily's father (Peter Gallagher) is a big-time real estate developer who wants to tear down the neighborhood where the kids live, where they interact with a kindly older guy who runs a colorful diner, and where they stage their amazing flash mobs in what appears to be an abandoned warehouse.

Apparently, the kids are all independently wealthy, since they're able to show up 24/7 to perform these flash mobs, which continue to surprise and mystify TV reporters and citizens, even though they happen all the time. Also, this must be an alternate universe of Miami, because there are no gangs, homeless people or nefarious criminals (other than said big-time developer) anywhere.

Emily is an outsider in every way, but she somehow manages to get the flash mob to think beyond the $100,000 payoff and instead dance to make a statement and save the cozy neighborhood they all know and love. "It's about giving people who can't speak a voice," someone utters meaningfully somewhere along the way.

I'm not going to tell you whether The Mob accomplishes their mission, but based on what I'm revealing about the bland plot, stilted dialogue and cliché stereotypes, you can pretty much guess how it goes.

Look, there's only going to be one Dirty Dancing and one Footloose, and dance movies, in general, are never going to raise the bar any higher. But if you really, really love dance, then you'll love all the dance numbers in Step Up Revolution. On the other hand, you can see a lot of them on the movie's YouTube page.