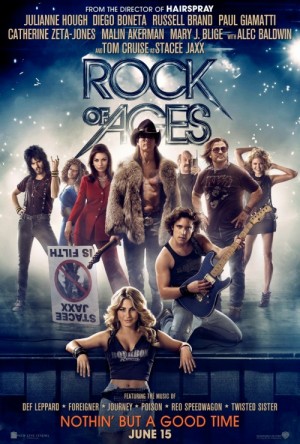 SYNOPSIS: A small-town girl (Julianne Hough) and a city boy (Diego Boneta) meet on the Sunset Strip while pursuing their Hollywood dreams. But things get complicated when they cross paths with aging rocker Stacee Jaxx (Tom Cruise).

Sex/Nudity: Stacee Jaxx is constantly surrounded by female groupies writhing suggestively in very few clothes. He greets women by groping their breasts and wears bottomless chaps with what can only be described as a godlike emblem covering his private parts. He seduces a Rolling Stone reporter, and the two knock around the room and have implied sex. She's clad only in underwear. Another scene implies that he masturbates on stage during a concert with his back to the audience. Couples, both same sex and opposite sex, kiss romantically and passionately – with lots of tongue action. A character gets a job as a stripper/pole dancer in a club and endures unwanted advances from male customers. Several women are shown stripping and pole-dancing, as well. A supposedly upstanding male character secretly likes to be spanked – and not by his wife.

Violence/Gore: A pet baboon throws things and snarls at people. A night club gets rowdy; bouncers throw people out. A few heated arguments, and a woman slaps her boyfriend after he insults her.

Drugs/Alcohol: Stacee Jaxx is either drugged or drunk through the whole movie, sometimes to the point of passing out. He drinks scotch straight from the bottle. Most of the film takes place in a night club or strip joint where people are drinking or getting drunk.

Which Kids Will Like It? Kids 16 and older who like Tom Cruise or Julianne Hough movies with lots of singing and dancing.

Will Parents Like It? The music is fun, but the non-stop sexual antics of Stacee Jaxx are distracting and not PG-13.

REVIEW: While Rock of Ages is rated PG-13, it's about as close to an R rating as you can get without actually being an R. Tom Cruise is known for putting everything into his roles (he did all his own vocals -- awesomely), and plays the burned-out, drugged-out, sexed-up, tattooed rock star Stacee Jaxx to the hilt.

Still, I'm not averse to R-rated movies if they're well done, and Rock of Ages has auspicious beginnings, having been inspired by the Broadway musical with the same name. Also, the rock-and-roll tunes are snappy, if you can get past the fact that many of the songs were released after this movie's fictional date of 1987.

The story begins with a sweet Midwestern girl named Sherrie Christian (Julianne Hough) who hops a bus to Hollywood to find fame and fortune as a singer. Minutes after arriving, she's mugged, her precious records (remember those?) stolen, and then rescued by well-meaning bartender Drew Boley (Diego Boneta), who works at the Bourbon Room.

Known for its great concerts, the Bourbon Room is struggling with financial difficulties. Its owner Dennis Dupree (miscast Alec Baldwin – I couldn't get past his long hair) and sidekick (Russell Brand, playing ... Russell Brand, the same character he always plays) are trying to figure out how to save the club.

Enter Stacee Jaxx (Tom Cruise), who's leaving his band, Arsenal, and launching a solo career. His sleazy manager Paul Gill (Paul Giamatti) has promised that Stacee will hold his first solo show at the Bourbon Room. Side stories involve a Rolling Stone reporter (Malin Ackerman) who gets involved with Stacee, a world-weary Justice Charlier (Mary J. Blige) who runs a strip club, and the mayor's ultra-conservative wife (Catherine Zeta-Jones) who stages protests outside the club while other women hold signs proclaiming "Rock and Roll is Evil" and "Rockers Burn in Hell."

If you were around in the 1980s, you'll probably love all the big hair, leather pants, sparkly Spandex and mini-skirts in this movie. But even though I haven't seen the Broadway musical on which this is based, I have to believe the over-the-top characters and cheesy story didn't translate well to the screen. It's all very campy, and I'm not sure that's the vibe they were going for.

However, Tom Cruise is a heck of a singer, and Diego Boneta and Julianne Hough do well with their vocals, too. Tunes include "Pour Some Sugar on Me," "I Can't Fight This Feeling," "Wanted Dead or Alive," "Waiting for a Girl Like You," and many others. Look for cameos by real-life rockers Sebastian Bach, Debbie Gibson, Nuno Bettencourt, and Kevin Cronin. Catherine Zeta-Jones and her band of conservative church ladies do a horribly awkward, cringe-worthy performance of "Hit Me With Your Best Shot." I was hoping someone would knock me out so I wouldn't have to watch it.

But if you take Rock of Ages for what it is – a 1980s-inspired musical that should have been rated R and features people randomly bursting into song – you might like it. Just don't go into the theater expecting a big dramatic storyline. And don't let your 13-year-olds see it (or 14- or 15-year-olds, for that matter)!