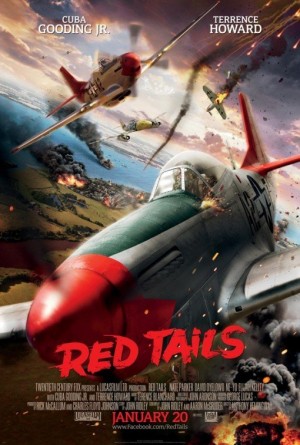 MPAA Rating: PG-13 for some sequences of war violence

SYNOPSIS: It's the 1940s, and a crew of African American pilots are in the Tuskegee training program during WWII. They're kept segregated and mostly on the ground, but show their bravery and valor when called upon to fight the Germans.

Sex/Nudity: A pilot courts an Italian woman who lives near the base. They kiss a few times and are shown waking up together in one scene; he's shirtless and she's in lingerie.

Violence/Gore. Lots of intense combat scenes as the pilots battle German fighters in the air and shoot assorted things on the ground, including trucks, trains, an airfield, and a ship. Some gunfire, explosions and several scenes of injured and bloodied pilots struggling to stay conscious as they return to the base. Planes catch fire and crash. A character is captured by the Germans. Pilots get into fistfights on the ground; a black pilot punches a white soldier who insults him.

Drugs/Alcohol: A pilot has a drinking problem and sips from a flask. A commanding officer smokes a pipe, and others smoke cigars. A few scenes take place in a bar where soldiers are drinking.

Will Parents Like It? Red Tails isn't a fantastic movie, but it's not bad. It's also a good history lesson with some cool aerial stunts.

REVIEW: You'd think that a movie about black pilots during an era when blacks were thought of as lesser individuals would be edgy and dramatic. But Red Tails seems more like a movie you'd find on the Hallmark Channel, only with a little blood thrown into the mix.

The aerial stunts and combat scenes are exciting to watch, but the pilots talk to each other via their headsets like they're playing video games in an arcade – even when they're badly injured and near death. I realize Red Tails is rated PG-13, but none of the life and death war stuff comes through. In short, it just doesn't seem realistic.

But that's not to say it isn't a great story that needs to be told, and good on producer George Lucas for telling it (even if the movie plays more like Jedi pilots in P-51 Mustangs). The story follows the Tuskegee Airmen, an all-black fighter pilot squadron during World War II. They're eager to fly and contribute to the war effort, but grounded because of the rampant racism in the mostly white U.S. military personnel on the ground. Basically, they're fighting two wars.

You can tell that Lucas loves aircraft, because great attention is given to the planes and maneuvers. In fact, great attention is given to all the details, from the flight jackets to the airfields. Red Tails reminds me of a movie that might have been made in the 1940s. You knew there was a war raging, but you'd never guess it watching Humphrey Bogart and John Wayne fight valiantly, keep their cool, and offer up earnest monologues about honor and duty.

And for turning in such fine performances in movies like Crash and Hustle & Flow, it seems like Terrence Howard is just phoning it in here. You can almost hear the casting sessions: "Let's get Terrence Howard, give him a pipe, and make him a commander."

Red Tails is worth seeing, if only to learn about the Tuskegee Airmen and their contributions to the war and the history of our country. But if that's what you're looking for, there are probably better productions on the History Channel.