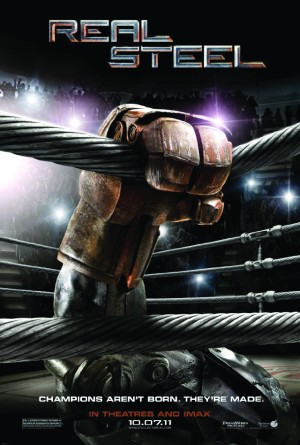 SYNOPSIS: In the not-too-distant future where robot boxing is a popular sport, a struggling promoter (Hugh Jackman) rehabs a discarded robot and pits it against other bots in the ring. He’s also a deadbeat dad who’s none too happy about having to look after his 11-year-old son Max for the summer – until Max finds an abandoned junkyard robot that might prove fight-worthy.

Violence/Gore. Robots fight both in and out of the boxing ring, including blows to their heads and torsos, parts flying off, and beaten to the point where they’re knocked down and can’t get up, as audiences cheer them on. An intense street fight between humans leaves one man knocked down, bloody and unable to move, as a child looks on in horror.

Drugs/Alcohol: An adult male drinks beer in front of kids and wakes up disheveled and hung over.

Will Parents Like It? It’s surprisingly sweet, despite the fact that Hugh Jackman’s character is rough around the edges. But the overall storyline focuses on the importance of family.

REVIEW: I confess that I didn’t have high hopes for this movie when I first heard about it. Fighting robots? Haven’t we had enough of those in recent years with the Transformers movies?

But I was pleasantly surprised when Real Steel delivered not only intense fighting scenes (who knew I could get so involved in a robot boxing match?), but also a sweet storyline about a deadbeat dad who sees the light. Way to go, Shawn Levy. You were able to exceed my expectations, and that’s getting tougher to do when movie theaters are rife with disappointing remakes and just plain dumb movies.

Real Steel takes place in the year 2024. Robots have replaced humans in the boxing ring, and really, that makes sense, doesn’t it? I’m not much into seeing guys pummel each other, but robots? Yeah, I can wrap my head around that. Former boxing champ Charlie Kenton (Hugh Jackman) is now a struggling promoter who travels the country with robots pieced together from scrap parts, making what money he can in small-time boxing matches.

But things are tough. He owes everyone money. His robots keep getting beaten to a pulp. He drinks heavily and is surly to people. His longtime friend and ‘bot builder Bailey (Evangeline Lilly) is starting to doubt if he’ll ever pull out of his slump. And his 11-year-old son Max (Dakota Goyo) doesn’t even know him.

But when Max’s mother dies, Charlie finds himself looking after the boy for the summer until his ex’s sister (Hope Davis) and husband (James Rebhorn) return from Europe and are able to adopt him. Plucky Max is determined to join Charlie on the road, especially after he finds an abandoned robot in a junkyard, names him Atom, and convinces Charlie to train the robot to fight.

Ok, we know robots aren’t human, but something in Atom is human-like, which makes me root for him both as a fighter and companion to Max. Atom is equipped with the ability to “mirror” a human’s moves, which not only makes him seem human, but also helps with his training. Charlie shows him boxing moves and begins to remember when he himself was a champion boxer.

With its RoboCop-meets-Rocky storyline, Real Steel doesn’t break any new ground, and even ends with “the big fight against the reigning champion” we’ve seen in other movies. But what elevates it as a family-friendly movie is the father-son relationship. You can see the transformation in Charlie as a no-good loser-dad to someone who genuinely cares about Max. And Max isn’t a wimpy kid – he’s strong and resourceful and the driving force behind Atom’s rise as a champion, which ultimately brings Charlie back into the land of the living and earns him Max’s respect.

It’s fun how the filmmakers merge a lot of different things: sci-fi effects with the fighting robots (which seem remarkably real), the relationship between Charlie and Max, and the renewed romance between Charlie and Bailey. I also love how Disney took its longstanding “missing mother” storyline in a new direction. It all makes for an enjoyable movie for both kids and adults.