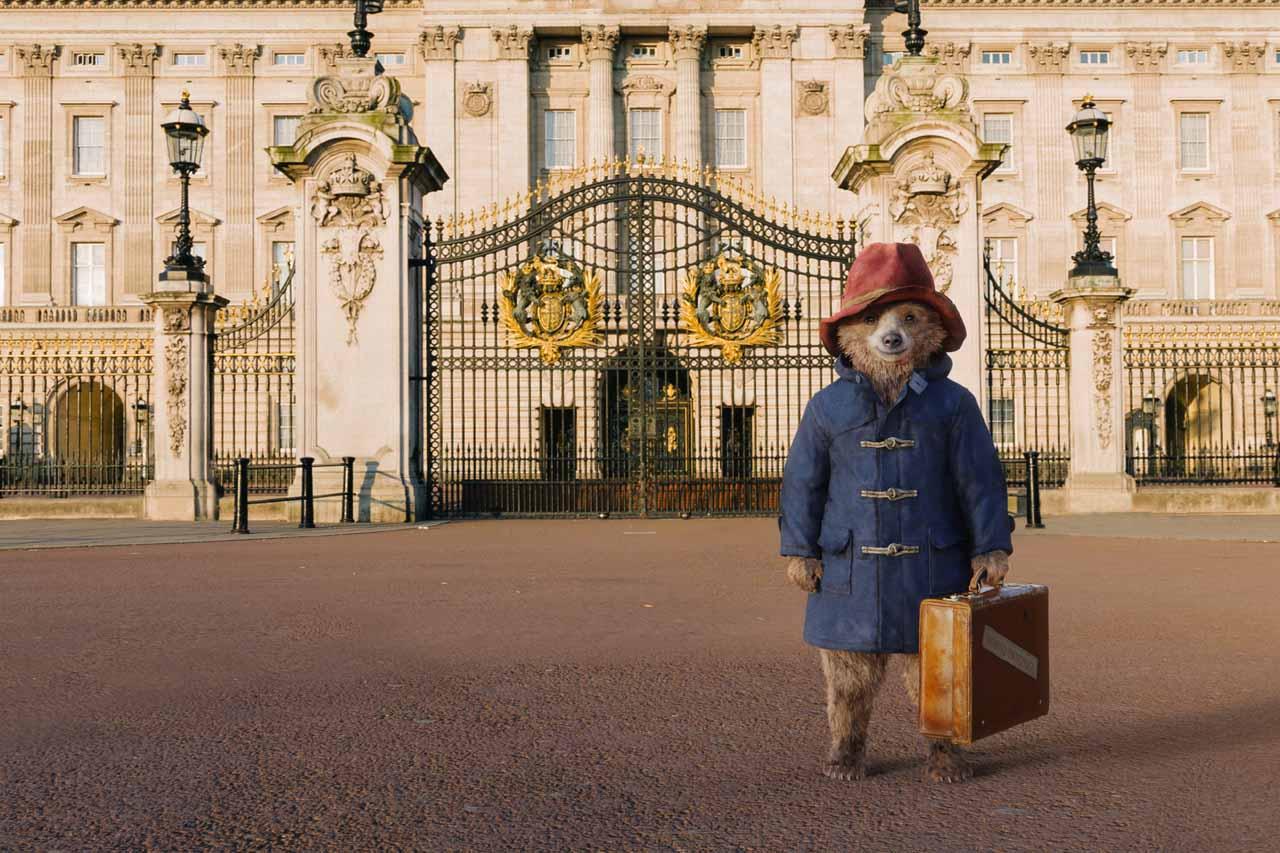 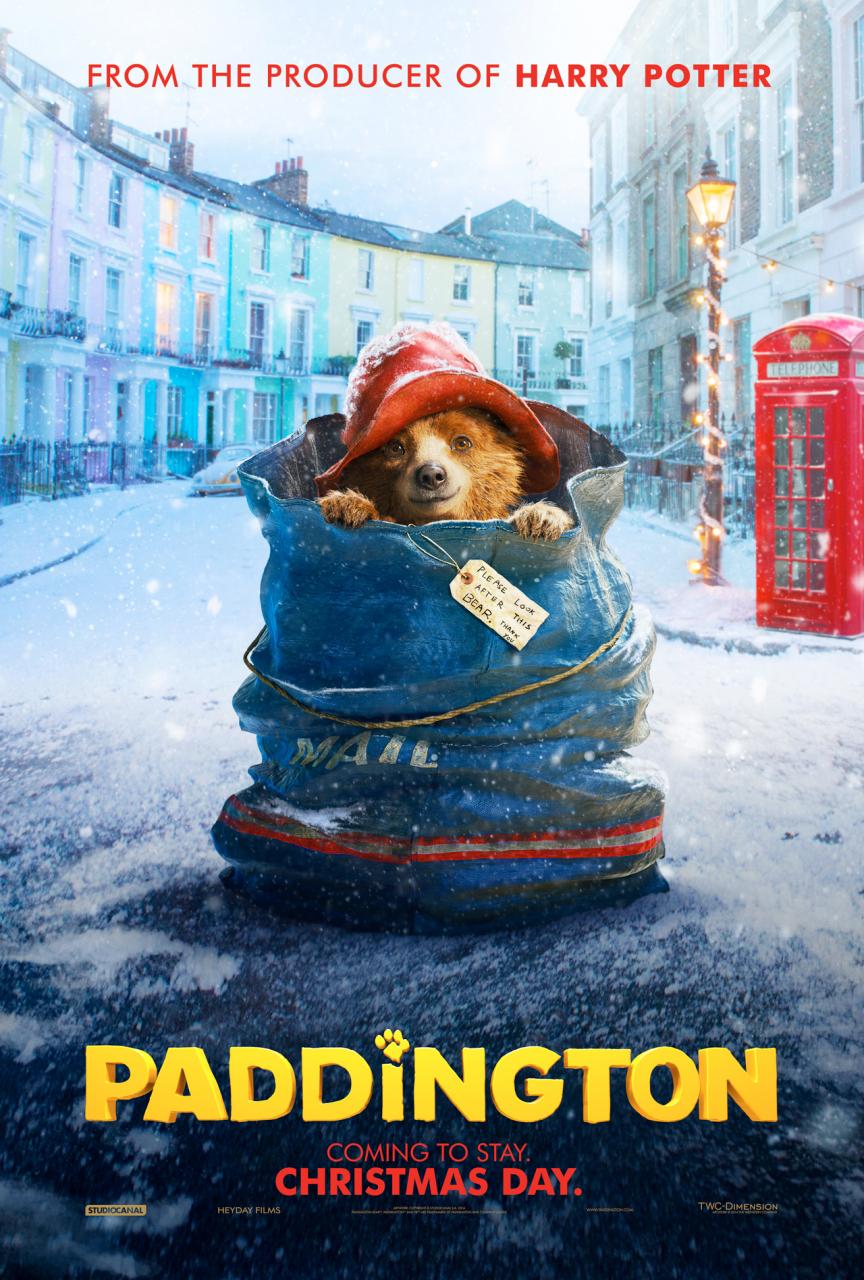 
SYNOPSIS: A young Peruvian bear travels to London in search of a home. Finding himself lost and alone at Paddington Station, he meets the kindly Brown family, who offer him a temporary haven.

REVIEW: Even if you're not familiar with the kids' books by Michael Bond, there's something endearing about a bear named Paddington, isn't there? You just know this bear is something special. And indeed, he is. It makes me want to go back and read the classic stories to my kids, even though they're now 17 and 20 years old. Somehow, I don't think they would mind.

The story begins with an English explorer discovering a family of bears in "Darkest Peru." As he prepares to leave, he tells them to look him up if they're ever in London. Jump ahead several decades, and an earthquake destroys the bears' village and kills the young bear's uncle (the death is a brief mention, and we never actually see a body). As the bears' home is now decimated, the young bear's aunt decides it's time for her to retire to an assisted-living facility for bears. Who knew such a thing existed?

Remembering the explorer's words, she stows the young bear away on a boat
bound for London, accompanied by his uncle's red hat (with an "emergency"
sandwich in it), a suitcase, and several jars of marmalade -- which, of course, has
all the nutrients a bear requires.

When he gets to London, the young bear is not sure what to do, so he settles
down at Paddington Station, until the kindly Brown family discovers him and
invites him to their home until they can figure out what to do. Well, Mrs. Brown
(Sally Hawkins) is kindly, while Mr. Brown (Hugh Bonneville) is suspicious and
nervous about the safety of this situation.

The Browns name him "Paddington" after the station (and because it's a supercute
name), and set about helping him find this mysterious explorer. However,
they don't realize that an evil taxidermist named Millicent (Nicole Kidman) wants
to stuff said bear and add him to her collection.

In the meantime, Paddington (voiced by Ben Whishaw) wreaks adorable havoc
everywhere he goes, whether it's flooding the upstairs bathroom and riding the
tub down the stairs or inadvertently chasing a pickpocket to return his wallet. Oh,
and by the way, this bear loves marmalade.

It's rare to watch a kids' movie that's actually sweet and fun for both kids and
adults. "Paddington" is just such a movie. The young bear is gentle and polite, and
seems to keep his wits about him, even in dire situations. Bonneville leaves his
stuffy "Downton Abbey" role behind to play the overprotective, exasperated
matriarch of the Brown family. The kids, played by Madeleine Harris and Samuel
Joslin, act just like real kids (i.e. angry, embarrassed by their parents, etc.). And
Hawkins is delightful as a loving mom who immediately bonds with Paddington.
As a bonus, she also has a thriving career as an illustrator.

But "Paddington" isn't just a cute family movie. It touches on bigger issues, but in a way that's not too heavy for kids. The Brown family isn't perfect, but they love each other and work together to help Paddington. The story reminds us that families come in all shapes and sizes, crossing biology and sometimes even species. (I mean, who doesn't consider their pets part of the family?)

"Paddington" also includes a subtle message about refugees, not only Paddington, but also an antiques dealer named Mr. Gruber (Jim Broadbent) who recalls leaving his own home to flee the Nazis and take a train to London.

And of course, the film stresses kindness, compassion to strangers, and good manners. There's some slapstick humor, but they filmmakers never dumb it down in any way.

In summary, "Paddington" is a charming movie for kids, teens and grownups. There's even a hat/tip to James Bond and Indiana Jones.

Sex/Nudity: Mr. Brown kisses Mrs. Brown passionately before embarking on a heroic mission. Mr. Brown disguises himself as a woman, and a male guard flirts with him. Millicent flirts with the Browns' neighbor in order to capture Paddington.

Violence/Gore: An earthquake destroys Paddington's Peruvian home and kills his uncle (though we don't see the body). The villainous Millicent (think Cruella de Vil) slaps her coworker and chases, drugs (with a poison dart) and kidnaps Paddington, threatening to have him stuffed. Paddington accidentally floods an upstairs bathroom, blows up a kitchen (don't try this at home, kids), and pursues a pickpocket through London.

Profanity: Fairly mild, including "shut your pie hole" and "good lord." The Brown kids call their dad "boring and annoying." (See what I mean about "real"?)

Drugs/Alcohol: A woman distracts a security guard by drinking shots of whiskey with him until they're both drunk.
Which Kids Will Like It? Kids aged six and older who like cute movies about families or who are familiar with the Paddington books.
Will Grownups Like It? "Paddington" is really cute. One of those rare family movies that's delightful for both kids and grownups.
Back To Top