ONE FOR THE MONEY 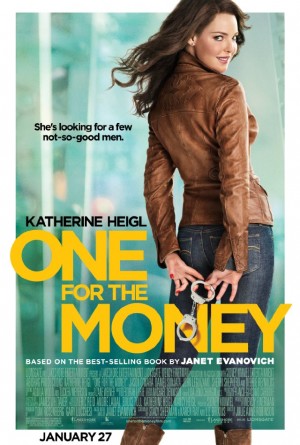 Genre: Action, Comedy, Crime, Based on a Book

SYNOPSIS: Unemployed and newly-divorced Stephanie Plum lands a job at her cousin's bail-bond business. Her first assignment? Bring in a wanted cop with whom she has a romantic past.

Sex/Nudity: Stephanie makes friends with two prostitutes, who wear skimpy outfits with lots of cleavage. References to sex, prostitution, a high school sexual encounter, and a sexual fantasy. One scene finds Stephanie handcuffed to a shower rod, and the guy who handcuffs her takes the towel, leaving her naked (we see her from the side with her hands covering her breasts). An older nudist's bare bottom is shown as he's taken into custody. Stephanie takes her shirt off (but leaves her bra on), so Morelli can attach a wire to her mid section. Her wardrobe consists of tight-fitting, cleavage-baring shirts and tight jeans.

Violence/Gore. A car explodes, killing a character. Two men are shot off-camera, and their bodies are shown. A body is discovered stashed in a container (though we don't see the body). Some gun violence; a character is grazed and another fatally shot. Some of the gunplay is careless, like the accidental shooting of a roast chicken being served for dinner. A character buys a gun for another character, who uses it illegally. A fist fight leaves one person bloodied and bruised; another character is pepper sprayed.

Drugs/Alcohol: A character has a bong in his apartment and acts high on something. Heroin is discovered and discussed in one scene, including references to a heroin dealer. Adults drink wine with dinner; Stephanie and Morelli drink beer together.

Which Kids Will Like It? Kids 13 and older who like Katherine Heigl movies or who've read the Janet Evanovich books on which this character and movie is based.

Will Parents Like It? It's light-hearted, brainless fun, though the gunplay and violence is a bit careless for a PG-13 movie.

REVIEW: Stephanie Plum does not live in the real world. No one who loves cheese puffs and Big Gulps that much would have Katherine Heigl's body. No one who's just shot and killed a man would carry on with such sassy gusto. And no one could jump into the bail bond business and start carting people in so easily.

But none of that really matters, because One For the Money is not that kind of movie. All that matters is that Stephanie Plum (Katherine Heigl) is adorable, resourceful, and plucky. That her parents (Debra Monk and Louis Mustillo) and Grandma Mazur (Debbie Reynolds) are sweet and supportive. And that every guy Stephanie crosses paths with is at least mildly handsome, if not downright studly.

Based on the book by Janet Evanovich, One for the Money follows the adventures of Stephanie Plum, a Jersey girl who's down on her luck. She's recently divorced, just lost her job selling lingerie at Macy's, and then her cute red car gets repossessed outside her parents' home.

So she does what any Jersey girl would do – start working for her cousin Vinnie (Patrick Fischler) as a bail bond recovery agent, a.k.a. a bounty hunter. It's worth $50K if she can bring in a cop named Joe Morelli (Jason O'Mara) who's wanted for shooting an unarmed criminal while off duty. Complicating things is the fact that Joe and Stephanie had a one-time fling back in high school.

Helping Stephanie learn the ropes of her new job is seasoned bounty hunter Ranger (Daniel Sunjata – Franco on Rescue Me). He buys her a gun (is that even allowed?) and teaches her how to shoot. Unfortunately, Stephanie isn't as careful with the gun as she should be, and while having dinner with her family one night, her grandma accidentally shoots the roast chicken while it's on the table. Note to self: Never give your gun to your grandma at the dinner table.

I know that scene is supposed to be funny, but it made me cringe because people are accidentally shot all the time and it's so not funny. In fact, by the time we get to the end of the movie and see Stephanie maintain her sassy spunk in the midst of killing people, it's just not at all realistic.

I wish I could say that One For the Money is a great movie, because it's a cute premise with a built-in fanbase of Evanovich's avid readers. While talking about the movie over on Facebook, her fans made me want to start reading the books, too.

But the truth is that One For the Money isn't a great movie. The dialogue and characters are clichéd and predictable, the storyline would never happen as it plays out on screen, and Heigl and O'Mara don't have much chemistry.

All that being said, though, it's still kind of a cute popcorn movie that doesn't require a lot of brainpower, as long as you're not looking for anything too smart or creative. If you're a fan of either Evanovich or Heigl, this movie is worth checking out