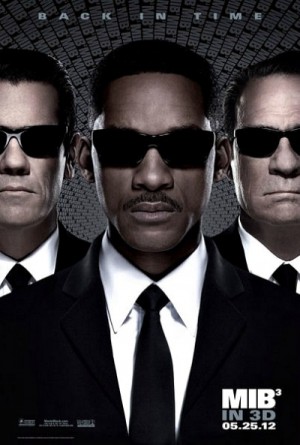 SYNOPSIS:  Will Smith and Tommy Lee Jones don the black suits and shades for the third time to battle aliens and save the earth. This installment involves time travel. And pie.

Sex/Nudity: The most offensive scene happens at the beginning of the movie, when an alien man with a freakishly long tongue French kisses a woman, who "sucks" on his tongue (I know, gross). That scene made me cringe, but other than that, mostly flirting between a male and female agent, a correctional officer joking about conjugal visits, and a woman wearing tight clothing with lots of cleavage (in 3D, if you see that version).

Violence/Gore: Weapons include a variety of high-tech space guns and conventional guns. Assorted aliens fight and kill with stingers, brute force and hand-to-hand combat. Men in Black agents kill aliens with a space gun that disintegrates them. The main villain, Boris the Animal, kills people by firing deadly darts at them. He also has a small, bug-like alien living in his hand that he releases to do his dirty work. A climactic fight scene involves Agents J and K and Boris the Animal on a space shuttle gantry as the craft is getting ready to take off.

Drugs/Alcohol: Smoking and drinking at a party set in the 1960s.

Which Kids Will Like It? Kids 12 and older who liked the first two Men in Black movies or funny sci-fi films with lots of aliens and special effects (expect lots of alien goo).

Will Parents Like It? Men in Black III is a fun installment to the franchise. The PG-13 rating is mostly on target, except for the opening scene with the above-mentioned French kiss.

REVIEW: I must preface this review by saying that I have a thing for Tommy Lee Jones. Not that I want to marry him or anything, but just that he seems to play the exact same character in every movie and does it so well that people keep hiring him to play that character year after year. It's really quite awesome when you think about it.

You don't need to have seen the previous two Men in Black movies to love this one, nor do you need to know the storylines. All you need to know is that Agent K (Tommy Lee Jones) and Agent J (Will Smith) have been partners in the covert Men in Black program for many years now, and that they've dedicated their lives to saving the planet from aliens.

The story begins with Boris the Animal (Jemaine Clement) – an alien that Agent K arrested in 1969 – escaping from lunar prison and stealing a time travel device to go back in time and kill the young Agent K (Josh Brolin) in order to carry out his evil plan to destroy Earth.

After Boris erases Agent K from the current timeline, Agent J realizes he must also go back in time to stop Boris from killing K. After one of the wildest falling scenes in cinematic history, J does just that, and learns a few things about his own past in the process.

It's been a decade since Men in Black II was released, but that doesn't stop this movie from being totally awesome. In addition to the Tommy Lee Jones thing, we have his buddy-bromance relationship with Will Smith, who has some very funny lines, including one where he gripes about being "fish-slapped" by a humongous alien fish. (And I apologize for the adult-oriented phrasing in this family review, because I did not get the connection to being b-slapped until I just wrote that. Sometimes it takes me a while.)

Special mention must be made of Josh Brolin, who's carved out a nice reputation as one of the best actors on screen today. He nails everything about Tommy Lee Jones, from his gravelly voice to his steely expressions to his deadpan delivery -- though he's not nearly as grumpy, being four decades younger and less world-weary.

Bringing the story to 1969 allows for some fun references, including the fact that Andy Warhol (Bill Hader from Saturday Night Live) is actually a secret agent itching to shed his pop culture persona. We also get a little romance between Agent K and Agent O (Emma Thompson, deviating from her usual Merchant-Ivory type British roles).

I recommend that you see Men in Black III in 3D, a sentence you rarely ever read in my reviews. The special effects and aliens are 3D-worthy, and the aforementioned jump scene must be seen in 3D to be fully appreciated. The backstory: Agent J doesn't realize that a time-jump means you actually have to jump – and from a very high place like the Chrysler Building.

And then there's pie. In addition to Tommy Lee Jones, I also have a thing for pie. So to hear him utter the words "We need pie," and then watch him actually eat a piece of pie at a diner ... well, my world is now complete. I completely agree: When things get crazy, sometimes you just need to stop and eat a piece of pie to clear your head. That's our philosophy in this household, and I can tell you it works wonders to stave off panic and drama. Try it sometime.