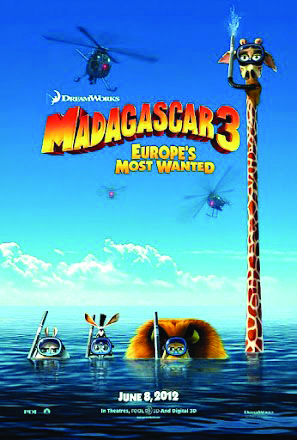 MPAA Rating: PG for some mild action and rude humor

SYNOPSIS:  Alex, Marty, Gloria and Melman are still trying to get home to their beloved Central Park Zoo in New York City. Their journey takes them through Europe where they find the perfect cover: a traveling circus.

Sex/Nudity: King Julien is smitten with a tricycle-riding circus bear, who has a few provocative slow-mo scenes. The two are shown snuggling together, and Julien calls her his "big hairy beast." Alex and Gia flirt and hug. Gloria and Melman are a couple and hug a few times.

Violence/Gore: Captain DuBois is a vicious animal control officer who's determined to kill Alex for a trophy. She also shoots characters with a dart tranquilizer gun and puts several officers in the hospital. Fighting dogs threaten people. Lots of physical comedy involving the animals, including a chase scene through a casino and the streets of Monte Carlo.

Profanity: One character is surly towards the others. Another character says "that's bull-shevik."

Drugs/Alcohol: One scene takes place in a casino, but no obvious drinking is shown.

Which Kids Will Like It? Kids 6 and older who liked the other Madagascar movies or animated movies with talking animals.

Will Parents Like It? The non-stop action is mostly geared for little ones. This might be a good film for parents to catch up on some sleep.

REVIEW: Animated family movies often decrease in quality with each new sequel, and that's the case with Madagascar 3: Europe's Most Wanted. Oh, it's entertaining enough, and the non-stop action and funny characters will keep little ones happy. But non-stop action and funny characters aren't necessarily enough to engage the whole family. There has to be more – a good story, a creative script, and characters that aren't built on stereotypes. Unfortunately, Madagascar 3 is lacking in those departments.

The movie opens with the four characters we know and love from the other movies -- Alex the lion (voiced by Ben Stiller), Marty the zebra (Chris Rock), Gloria the hippo (Jada Pinkett-Smith), and Melman the giraffe (David Schwimmer) -- still stranded in Africa and homesick for their beloved Central Park Zoo in New York City.

But first they have to track down those clever penguins, who managed to cobble together a plane and fly to Monte Carlo, where they're living large on the casino circuit. When Alex et al arrive, they wreak havoc and end up being chased by a nefarious animal control officer, Captain DuBois (Frances McDormand), who's determined to kill Alex as a trophy. And boy, is she determined. She'll follow that lion to the ends of the earth to achieve her goal.

The animals seek refuge on a train with a traveling circus, led by grumpy Russian tiger Vitaly (Bryan Cranston) and sweet jaguar Gia (Jessica Chastain). But our friends have to do some pretty fancy talking to pass themselves off as circus performers. Thus we get the movie's catch-phrase when Marty dresses up and chants, "Circus afro, circus afro, polka dot, polka dot, polka dot afro!" It's cute for about five seconds, then it gets annoying.

One of my pet peeves with family movies is when the villains are so obviously stereotypical. Gruff Russian character with sad backstory? Check. Stern French cop who ends up looking like an idiot? Check. It's not all bad, though. At one point, DuBois belts out a sad torch song that makes everyone's mascara run (even the guys, which, ok, is a little weird).

And after reviewing thousands of movies, some things just jump out at me as obvious marketing ploys. There's no doubt that Katy Perry's "Firework" is a snappy tune that makes you want to get up and dance. But when used in this movie during the circus scenes, all I could think was, Paramount Pictures is cross-promoting her upcoming concert documentary, Katy Perry: Part of Me. Then again, I did want to get up and dance, so there's that.

Other pluses: Madagascar 3 is bright, colorful, features a great voice cast, and includes the usual uplifting messages for kids: there's more to people (and animals) than what you see on the surface, sometimes friendship requires sacrifice, and working together towards a shared goal is better than going it alone.