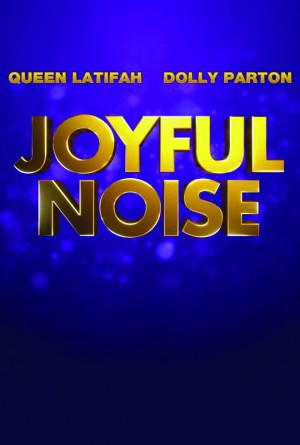 MPAA Rating: PG-13 for some language, including a sexual reference

SYNOPSIS: When a small-town choir sets out to win the national "Joyful Noise" competition, the odds are clearly against them. But they just might have a chance if the choir director (Queen Latifah) opens up to new ideas and finds a way to work with the choir's major donor (Dolly Parton).

Sex/Nudity: A teenage boy and girl flirt with each other and kiss a few times. She tells him not to look at her butt, because she's "a good girl" (and her mom doesn't allow her to date). An adult man and woman are seen making out, then waking up together the next morning. A married man and woman hug each other. A woman gains a reputation for killing men with whom she sleeps.

Violence/Gore. A mother gets into a heated argument with her daughter and slaps her across the face. Three teen boys fight, leaving two of them bruised and bleeding.

Drugs/Alcohol: A teenage boy and girl (she's 16) go to a night club, but there's no drinking.

Will Parents Like It? The snappy tunes are great, but the story is predictable and cliché. All the characters are decent people dealing with difficult situations, but it's unrealistic to think that every storyline would be wrapped up so neatly.

REVIEW: Joyful Noise is a movie that could have soared, given the right blend of writing, plot development, characters, dialogue and music. But it's got too much going on, and none of it is particularly focused.

The storylines include: a church choir trying to win a national competition, a shy kid with Asperger's Syndrome, a supposedly wild teenager (he's not that wild) who comes to live with his grandmother, a teen romance, a bitter mom trying to raise two kids on her own, a town bully (he's not really a bully) who tussles with said wild teenager, a church pastor who's unwilling to change with the times, a woman dealing with the loss of her husband, a woman who can't find the right man, and a town struggling through a bad economy.

Whew. It makes me tired just reading all that. Pick a plot! Focus on it! Instead, we have a mushy movie with too many storylines, all of which are wrapped up neatly in 118 minutes. I'm not opposed to nice, simple movies if they're nice and simple. Joyful Noise is nice, but it's not simple, and could have used a re-write or two to add some depth to the story, characters and dialogue. But the music is uplifting and fun, so it's got that going for it.

The story begins with the choir at the Divinity Church in Pacashau, Georgia, rehearsing for a regional "Joyful Noise" competition (which spurred this online Joyful Noise competition), but there are differing opinions on how best to proceed.

The newly appointed director Vi Rose Hill (Queen Latifah) wants to stick with the old tried-and-true spirituals, but choir member G.G. Sparrow (Dolly Parton) wants to kick it up a notch with some new music. Adding fuel to the fire: G.G. is a major financial donor to the church and choir.

Then G.G.'s grandson Randy (Jeremy Jones) arrives in town and starts making eyes at Vi Rose's daughter Olivia (Keke Palmer), as well as encouraging the choir to go big or go home. It doesn't take a fortune teller to know how this story is going to turn out, but along the way, we get lots of great tunes performed by the cast from a variety of artists, including Michael Jackson, Usher, Chris Brown, Paul McCartney, Sly & the Family Stone and Stevie Wonder. Dolly Parton also wrote original songs for the film, including Not Enough (Love) and From Here to the Moon.

Despite the contrived plot, I still managed to weep profusely during one scene where Dolly Parton sings sweetly about her recently deceased husband, played by Kris Kristofferson. Keep the hankies handy for that one.

Parton is always a hoot playing the feisty spitfire with a quick wit and caring heart, and both she and Latifah have amazing voices. Newcomer Jeremy Jordan also has a fantastic voice, as well as an easy way with the camera. I look forward to following his career.

If there's a bright side to the too-many-plots issue, it's that everyone can find something to relate to in this movie. Ultimately, though, it would have been better to focus on the choir storyline, with perhaps a couple of other things throw in to keep it interesting. I recommend waiting and renting the DVD when it comes out or perhaps just buying the Joyful Noise soundtrack.