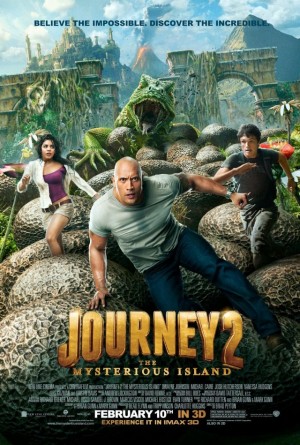 Genre: Family, Adventure, Comedy, Based on a Book

SYNOPSIS: This sequel to 2008's Journey to the Center of the Earth finds Sean Anderson (Josh Hutcherson) embarking on a mission to find his grandfather, whom he believes is living on the "mysterious island" featured in Jules Verne's classic novel.

Sex/Nudity: A teen lets her hair down in slow-motion and takes off her button-up shirt to reveal a skin-tight tank top, which she wears for most of the movie. Teens argue, flirt and eventually kiss. A running joke features Dwayne Johnson showing Sean how to flex his pectoral muscles to attract girls.

Violence/Gore. Giant lizards, birds and insects chase the main characters and sometimes crush other creatures in the process. A scary helicopter ride ends in a crash, but no one is injured. A character falls through the trees, but is saved just before hitting the ground. Another character injures his foot during a hike through the jungle.

Drugs/Alcohol: None, except for one line of dialogue played for laughs: "What were you drinking?"

Which Kids Will Like It? Kids 8 and older who liked Journey to the Center of the Earth, action-adventure movies with computer-generated creatures, or classic books by Jules Verne, Robert Louis Stevenson and other authors.

Will Parents Like It? It's a cute movie with good themes about family bonds, positive role models, respecting each other, and making sacrifices for the people you love.

REVIEW: There have been many film adaptations of The Mysterious Island, the classic novel penned by Jules Verne in 1874, and with good reason. It's a timeless story that continues to be relevant even in this modern age of texting and Twitter. Who wouldn't be enchanted by a mystical patch of land in the South Pacific with fluffy bees you can ride, lush waterfalls, colorful butterflies, and mystical secrets?

After much pondering, I'm going to say that Journey 2: The Mysterious Island is even better than its predecessor, 2008's Journey to the Center of the Earth. That movie was good, but I sort of forgot about it shortly after I saw it. Journey 2 has enough interesting elements to embed it in my memory for a while.

The story picks up a few years after Sean Anderson (Josh Hutcherson) survived that first perilous journey to the earth's core. He's living with his mom (Kristin Davis) and step-dad Hank (Dwayne Johnson), with whom he has no connection whatsoever.

But when Sean gets a coded message about the location of Jules Verne's famed Mysterious Island, he discovers that Hank has a knack for deciphering codes. The two are soon headed for Palau, where they hire chopper pilot Gabato (Luis Guzman) and his daughter Kailani (Vanessa Hudgens) to help them find the island.

Things look grim when their ancient helicopter goes down in a storm, but no one is injured, and they find themselves on the mystical island with tiny elephants, giant lizards and lost cities. They soon discover that Sean's grandfather Alexander (Michael Caine) has been living there and even built himself a sweet treehouse complete with a working elevator and lightning-bug lamps.

There are several reasons why Journey 2: The Mysterious Island is a great family movie: it incorporates science into the storyline, it doesn't shirk on the special effects, and it's all about the book by Jules Verne. Rather than mentioning it just once at the beginning, the book is referenced throughout the movie, along with other classic authors like Robert Louis Stevenson and Jonathan Swift. It made me want to find my copies and read them again, and I'm hoping kids have the same reaction.

Sure, there are a few plot holes in this movie – no human could have survived that helicopter crash – but you're talking about an island with tiny elephants. It's not meant to be taken at logistical value. Oh, and I'm not sure if it's intentional or not, but keep an eye out for a few Indiana Jones references.

Also, there are some nice family bonding moments, strong role models, a fearless teenage girl who can take care of herself, and you get to see former pro wrestler Dwayne Johnson sing What a Wonderful World while accompanying himself on the ukulele. He has a surprisingly great voice!

Be sure to get in your seat in time to see the Warner Bros. cartoon at the beginning – Daffy's Rhapsody. Oh, Elmer Fudd, you'll never get that wascally wabbit, thank goodness!