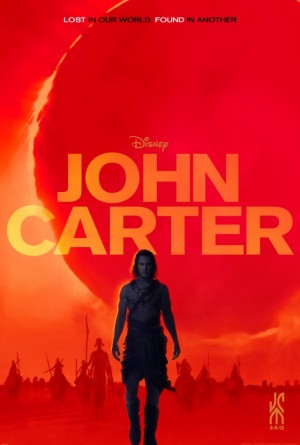 MPAA Rating: PG-13 for intense sequences of violence and action

Genre: Action, Adventure, Fantasy, Sci-Fi, Based on a Book

SYNOPSIS: Based on the books by Edgar Rice Burroughs, John Carter stars Taylor Kitsch as a Civil War veteran who's transplanted to Mars, where he finds a lush habitat, 12-foot tall barbarians, and the beautiful princess Dejah Thoris (Lynn Collins), who's caught in the middle of a war.

Sex/Nudity: Gazing, touching, flirting and a few kisses between John Carter and Dejah Thoris. She's shown in skimpy apparel in a few scenes, including one where she's in bed with a sheet covering her while he's outside on the balcony.

Violence/Gore. Heavy sci-fi violence includes battle scenes on land and in the air, a shape-shifter who plans to destroy the planet, and assorted weapons, including guns, spears, knives, swords and one that turns people to dust. A Gladiator-style battle takes place in an arena, where huge monsters are killed, another character is decapitated, and another is injured and expected to die. A Martian character is painfully "branded," tortured and sentenced to death by her own people. John Carter is chained and nearly killed several times. A flashback shows how his wife and child died in a fire and he found their charred bodies. On Earth, John is chased by Indians and Army officers on horseback, and a gun battle ensues. An ancient skeleton is shown. On Mars, a group of unhatched eggs is destroyed. After a battle, Martian bodies are heaped and burned.

Drugs/Alcohol: On Earth, John Carter is shown drinking and enters a saloon where everyone is drinking. On Mars, he drinks something that makes him queasy but allows him to understand the Tharks.

Which Kids Will Like It? Kids 13 and older who like movies with lots of sci-fi action and special effects. Also kids who are familiar with the Edgar Rice Burroughs books.

Will Parents Like It? It's neither a huge blockbuster nor a bad movie. It's somewhere in the middle. Though the story is a little confusing, the Edgar Rice Burroughs connection is interesting, the "good guys" are honorable and selfless, the special effects are cool, and there are a couple of strong female characters.

REVIEW: The cool thing about John Carter isn't so much the movie itself. It's the backstory. John Carter was the lead character in a series of novels by Edgar Rice Burroughs set on a fictionalized version of Mars known as Barsoom.

The story was first serialized in 1912 as Under the Moons of Mars in the pulp magazine The All-Story (under Burroughs' pseudonym Norman Bean). In 1917, it was re-titled A Princess of Mars and published as a hardcover novel. John Carter was featured or appeared in several more Burroughs novels dating through 1940.

It helps to know all that going into the movie, partly because it's interesting and partly because it makes more sense when the character Edgar Rice Burroughs (Daryl Sabara) is introduced as John Carter's nephew.

Still, the story takes a bit of focus to figure out. At the beginning of the movie, we meet John Carter (Friday Night Lights' Taylor Kitsch) and learn he's a Civil War veteran who fought for Virginia and the Confederacy. Through flashbacks, we also learn that his wife and child died in a fire.

While mining for gold in the Arizona territory, John is chased on horseback by Army officers and a band of Apaches. He ends up in a cave, where he kills a mysterious figure whose magical amulet transports him to Mars. It doesn't take long for him to realize he's not in Kansas (or Arizona) anymore. He also learns that because of the lesser gravity, he's super-strong and has the ability to fly ... or at least hop really high.

On Mars, known by its inhabitants as Barsoom, John meets the nomadic Tharks -- tall, green, four-armed creatures who call him "Virginia" after mangling his explanation of who he is and how he got there. John also lands smack in the middle of a war involving a beautiful princess named Dejah Thoris (Lynn Collins). She's trying to save her homeland, Helium, against invaders guided by a nefarious shape-shifting group of time-travelers known as Therns. Again, a little confusing to folks who don't know the backstory.

I interviewed Taylor Kitsch years ago during the first season of Friday Night Lights, and you could tell even then he was a rising star. I'm not sure he's the perfect person to play John Carter, partly because I still see his brooding Tim Riggins character on Friday Night Lights. But I try not to typecast people in my head, so I'm willing to give him a chance as an action movie star. And he's buff and toned, so there's that.

Kitsch doesn't have a ton of chemistry with Lynn Collins, and it's only when they're separated that you get the feeling they're meant to be together. But I love that her character is smart, brave and resourceful. John Carter may have rescued her in the beginning, but she is by no means defenseless. She can fight!

James Purefoy (Kantos Kan) and Mark Strong (Matai Shang) deliver their usual excellent performances, but it's a challenge to see some of these actors outside their usual roles – Bryan Cranston, Dominic West, Ciaran Hinds and Thomas Haden Church, among them. Samantha Morton and Willem Dafoe lend their voices to two of the Tharks.

When I first saw the trailer for John Carter, the Tharks reminded me of the characters from the Star Wars bar scene. They even sound a little like Jabba the Hut, and I'm pretty sure I heard some light saber noises during the fight scenes. But John Carter doesn't come close to Star Wars or Avatar or any of the other films to which it's been compared.

If you're a fan of action-packed sci-fi movies with lots of special effects, cool flying machines, and a few funny characters -- like the adorable monster-dog that follows John Carter around – this movie is probably worth seeing in the theater. I'll even recommend the 3D version, even though at 132 minutes, it's a little long. I must admit, though, I liked the scenes on Earth better than the scenes on Mars, especially after a recent Downton Abbey marathon.

But I'll be curious to see what bonus features they include on the DVD and blu-ray releases. I'm sure it'll be interesting to learn how the movie came together for its $250 million budget.