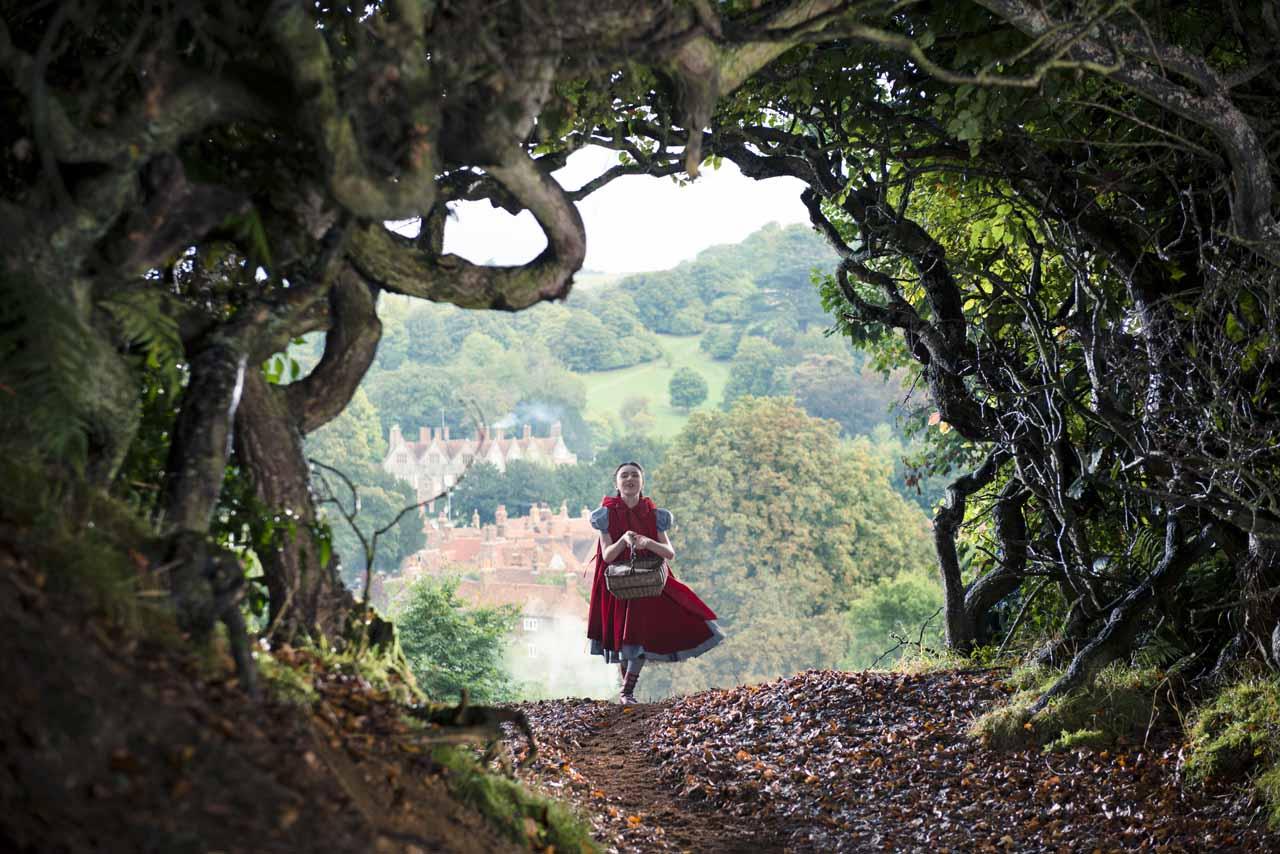 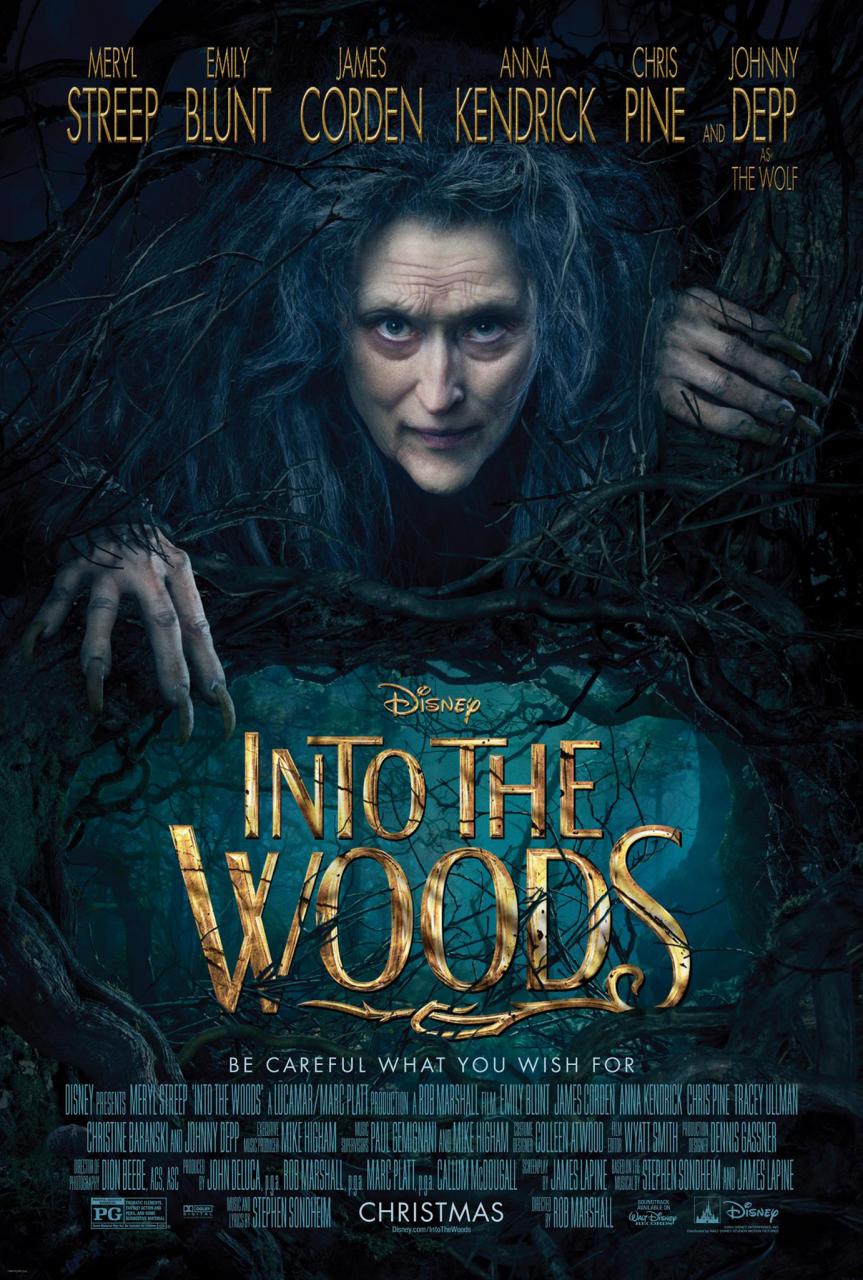 SYNOPSIS: A witch tasks a childless baker and his wife with gathering magical items from classic fairytales to reverse the curse put on their family tree.

REVIEW: Based on Stephen Sondheim's beloved Broadway musical, "Into the Woods" weaves together several classic fairytales into a new story. It takes place in a magical kingdom where a kindly baker (James Corden) and his wife (Emily Blunt) are fretting over the fact that they can't have children.

So they strike a deal with a terrifying witch (Meryl Streep), who dispatches them "into the woods" to find a assorted objects -- a red cape, golden hair, a milky-white cow, etc. -- that will help them break their childless curse.
Meanwhile, Cinderella (Anna Kendrick) wants desperately to attend a ball hosted by Prince Charming (Chris Pine), and a familiar young girl in a red cape (Lilla Crawford) is on her way to her grandmother's house when she encounters a Big Bad Wolf (Johnny Depp).
Bringing the beanstalk tale into the story, young Jack (Daniel Huttlestone) is forced to sell his cow, but ends up trading it for magic beans, which ultimately leads to big problems for the whole kingdom. All the characters eventually converge as they head into the woods to carry out their missions.

"Into the Woods" is rated PG, but it's really not for little kids. While the production, woodland settings, and compelling songs are absolutely gorgeous, the story might be somewhat dense and confusing for kids (and quite frankly, for me, too). Maybe it's because most people are familiar with the individual fairytales, and when you put them all together into one movie, it's a little overwhelming.
I happened to mention this to a friend who's seen the stage production, and she said the story is dense there, too. That made me feel a little better because I was afraid of casting a dark shadow over a beloved production.

I'm not familiar with the stage version, but I know it's special because any time it comes up in conversation among local friends who did the musical at our community theater here in Traverse City, they speak of it in hushed tones. I'd like to see the stage version at some point.

But look, Emily Blunt has a beautiful voice, Meryl Streep is dramatically bewitching as the witch, and Chris Pine is adorably comic as he sings a hilarious song called "Agony" with fellow prince Billy Magnussen, who plays Rapunzel's prince. After seeing the handsome Chris Pine make fun of himself in "Horrible Bosses 2," it's clear that he doesn't take his good looks too seriously. That will probably go a long way in the entertainment industry.

While "Into the Woods" isn't a typical happy-ending fairytale, there's still plenty of life lessons for kids, including valuing teamwork, making good choices, being brave, taking chances, and staying open to unexpected forms of family. In my
view, there actually IS a happy ending to this melancholic tale, even if the movie goes 20 minutes past when I thought and hoped it might end.

Sex/Nudity: Some flirting and kissing. A few suggestive song lyrics. It's implied that two characters have a tryst in the woods, although both are married to other people. Cinderella's stepsisters wear low-cut, tight-fitting outfits.

Violence/Gore: Central characters die. Others mourn their loss and children are left without parents. There's a sense of peril throughout the movie. A wolf stalks a young girl and eventually eats her, but a man cuts the wolf open and frees the girl. People try to slay a giant after it ravages a kingdom, causing trees to fall and general chaos. The witch is somewhat terrifying with lots of smoke and drama in her comings and goings. Jack is in peril several times, and his mom hits him on the head to knock some sense into him. A beloved pet dies, but is later resurrected. A baby is in peril, as his dad abandons him, feeling he won't make a good father. Cinderella's stepsisters and stepmother are cruel to her, and the stepmother mutilates her daughters in an attempt to match them up with the prince.

Profanity: One "oh my God."

Will Grownups Like It? "Into the Woods" is an excellent film, but might have more meaning for those who are familiar with the songs and stage version.
Back To Top