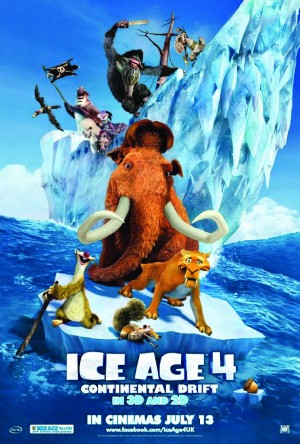 SYNOPSIS: This fourth installment of the popular Ice Age franchise finds Manny, Diego, and Sid adrift in the ocean after their continent splits apart. Using an iceberg as a ship, they encounter sea creatures, battle pirates, explore a new world, and try to get back home.

Sex/Nudity: Peaches has a crush on Ethan and tries to impress him by shunning her molehog best friend Louis. Diego and Shira flirt and eventually become a couple. Manny and Sid tease Diego about falling in love. Sea "sirens" act provocatively to lure in Manny, Sid, Diego and others. A male siren who looks like Fabio entices Sid's grandma with this line: "the wrinklier the fruit, the juicier the fruit." Sid accidentally kisses Diego.

Violence/Gore: No one is seriously hurt, but plenty of cartoon violence similar to the other Ice Age movies. In his continuing efforts to secure that elusive acorn, Scrat unintentionally causes the earth's land mass to shift, resulting in widespread destruction and peril. Manny, Diego and Sid are set adrift in the ocean, away from their friends and family. The pirate Captain Gutt is scary and threatening, even to his own group of pirates. The sirens are scary looking.

Profanity: Mild insults like "stupid," "freak," and "idiot." "Holy crab" is said as an exclamation.

Which Kids Will Like It? Kids 6 and older who like the first three Ice Age movies or cute animated films with talking animals.

Will Parents Like It? Yes, the PG rating is on target, and the movie includes good themes about friendship and family.

REVIEW: There's something lovely about seeing the Ice Age characters on screen again. It's like revisiting old friends. They're familiar, they're reliable, and they've evolved in their relationships over the years. When you think back to their dubious beginnings when they first met and were forced to rely on each other, it's fun to see how far they've come. They're like family, not only with each other, but us, too.

In this fourth movie, things continue to evolve peripherally around Scrat, that nervous saber-toothed squirrel (voiced by Chris Wedge) and his pursuit of the elusive acorn. This time it leads him straight to the center of the Earth, where he inadvertently causes the planet's single land mass to break into smaller pieces.

Meanwhile, Manny the wooly mammoth (Ray Romano) and his mate Ellie (Queen Latifah) are dealing with their teenage daughter Peaches (Keke Palmer). She's a good kid, but has a crush on teen mammoth Ethan (Drake), which is messing with her head. Her best friend, a soft-spoken molehog named Louis (Broadway star Josh Gad), gets caught in the crossfire when he hears her tell the other teen mammoths that she's not really friends with Louis. It breaks his heart. Ours, too.

When the Earth begins to break apart, Manny, Diego the "ruthless assassin" smilodon (Denis Leary), Sid the loopy sloth (John Leguizamo), and Sid's senile Granny (Wanda Sykes) get trapped on an iceberg headed out to sea. They encounter a band of pirates led by the menacing Captain Gutt (Peter Dinklage), an ape with a massive chip on his shoulder and a heartless thirst for revenge.

Ice Age: Continental Drift brings a whole new perspective from our beloved original characters. They're getting older (Manny still declares that he's "poofy, not fat!") and have new stuff to deal with. Manny is an overprotective father who just wants to get back home, especially after he and Peaches exchanged heated words right before the Earth broke. Sid wonders why his biological family abandoned him, but finds comfort in his "herd" family. And Diego finally gets a shot at love, thanks to a beautiful feline named Shira (Jennifer Lopez), who learns what it means to be accepted into a group.

The animation is gorgeous, especially the rolling seas, ice floes and prehistoric terrain. The new characters – including teen mammoths voiced by Nicki Minaj and Glee star Heather Morris  -- bring a fresh take to the story (though I admit I'm a little weary of hearing Wanda Sykes' voice in practically every animated movie – even though she does have a great voice!).

The main theme here is that "family" isn't necessarily the biological group of people you're born into, but rather the group – or herd, in their case – that protects you, has your back, loves you unconditionally, and will never abandon you, even when the ground literally falls away from underneath you.

Stay through the credits to hear the cast sing a snappy tune about family called "We Are."