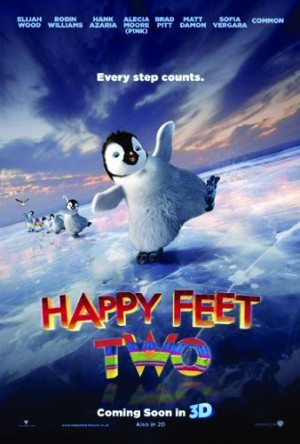 MPAA Rating: PG for some rude humor and mild peril

SYNOPSIS: Those adorable penguins are back with the next generation. Mumble and Gloria now have a son, Erik, who’s struggling to find his talents in the Emperor Penguin community. Meanwhile, Mumble and the rest of the penguins discover a new threat to their home – one that will take everyone working together to save them.

Sex/Nudity: Ramon flirts with Carmen throughout the movie, including this line: “You, me, egg, now!” Mates Mumble and Gloria hug and miss each other when separated.

Violence/Gore. A mammoth elephant seal is menacing to Mumble, Eric and their friends, but then needs their help when he falls over a cliff. Glacial shifts (shout-out to global warming) trap the penguins in an ice valley, and things look desperate as their food supplies dry up. Will and Bill the krill realize they’re at the bottom of the food chain after they see krill eaten and chased by whales and other fish. Predatory birds try to attack and peck the penguin chicks. Two male seals fight for dominance.

Profanity: Insults like "loser," "idiots," and "bottom feeders." An elephant seal tells a young penguin to “fluff off,” who in turn tells the seal, “I’m going to tear you a new nostril,” then whaps the seal across the nose.

Which Kids Will Like It? Kids 6 and older who liked the first Happy Feet movie or movies with super-cute characters who sing and dance.

Will Parents Like It? Yes, parts of it may be scary for very young kids, but it’s a sweet movie with an environmental message about working together for the good of all.

REVIEW: This sequel to 2006's Happy Feet introduces a new generation of penguins, as well as a new threat to their home. The young penguin chicks are so adorable and the animation so stunning, you and your kids will love them and their little singing and dancing routines.

The movie opens with all the penguins in Emperor-Land grooving to Rhythm Nation. Pink (Alecia Moore) plays Gloria, taking over for Brittany Murphy, who voiced the role in the first movie but died in 2009. Pink’s rich voice is perfect casting for the soulful Gloria.

Mumble (Elijah Wood) and Gloria now have a son, Erik (voiced adorably by Ava Acres), who, like his father in the first movie, is struggling to find his talent and fit in. The young chick can neither sing nor dance, and when he tries, ends up face down in the ice and embarrasses himself by urinating into the air (which I thought was unnecessary to the story).

The little penguin retreats to an ice hideaway, but he and two friends Atticus (Benjamin Flores, Jr.) and Boadicia (Meibh Campbell) soon follow Ramon (Robin Williams) as he journeys to Adelie-Land. Mumble goes after them, but feels like a failure when his son starts idolizing a popular, flying penguin named Sven (Hank Azaria).

During their travels, a glacial shift results in Mumble rescuing a giant elephant seal named Bryan (Richard Carter), but also puts the penguins back in Emperor-Land in dire peril. The entire population is now trapped in a giant valley flanked by large walls of ice. It’s up to Mumble, Erik and his two friends to bring fish to the starving penguins and figure out how to free them.

We can learn a lot from these penguins. Mumble is brave, caring and never gives up, even if it means bringing just a few fish at a time to the thousands of trapped penguins. Erik has inherited his father’s determination and willingness to try new things, even when all hope seems lost. Though Gloria is trapped, she provides comfort to the young penguin chicks,  encourages Mumble from below, and bolsters Erik with the gorgeous song Bridge of Light. And various Antarctica creatures work together to help save the penguins.

The funniest part of this movie are two krill, voiced by Brad Pitt (Will) and Matt Damon (Bill), who realize they’re at the bottom of the food chain and vow to try and change that. They throw themselves into the characters with gusto and have some of the funniest lines. At one point, Will says he’s going to “go eat something with a face!,” which ok, sounds a little like an episode of The Walking Dead, but comes off really funny because it’s a krill, for gosh sakes. This project must have been a blast for these long-time friends.

The music is varied and wonderful, including Do Your Thing, Rawhide, We Are the Champions, and a heartbreakingly lovely operatic tune, performed at just the right moment. The animation and musical numbers are also really well done. That’s because they were conceived by a team of choreographers, including tap dancer Savion Glover, who is responsible for Mumble’s moves, thanks to motion-capture technology.

The plot of Happy Feet Two wanders a little, and parts of it might be a little scary for very young kids. A flock of predatory birds try to attack and peck the young chicks, and at times, things look very desperate for the trapped penguins. But ultimately, it’s a sweet tale of friendship, family, accepting help from unexpected places, and finding your own unique gifts.

Airing before the movie is a brand new Looney Tunes 3D cartoon (if you choose the 3D Happy Feet Two, that is), I Tawt I Taw a Puddy Tat from Warner Bros. Way to bring an old classic to a new generation.