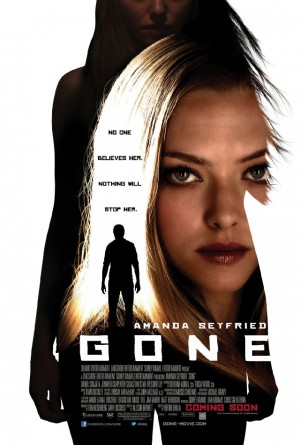 SYNOPSIS: When her sister disappears, Jill (Amanda Seyfried) is convinced the serial killer who kidnapped her two years ago has returned. When the cops do nothing, Jill sets out to once again face her abductor.

Sex/Nudity: A female character takes a shower, and the outline of her naked body is seen through the shower curtain. Some flirting, sexual innuendos, and a reference to rape.

Violence/Gore. The main character carries a gun and pulls it several times throughout the movie. She fires it at her ultimate target, then douses him with kerosene and sets him on fire. Flashbacks include kidnapping, struggling, being carried down a hallway and thrown into a deep pit in the woods. Photos of abducted girls show duct tape on their hands and mouths. Vague images of the remains of former victims, including bits of hair and broken bones (a girl uses a bone to stab her abductor). While learning self defense in a gym, the main character starts beating her male opponent.

Drugs/Alcohol: A female character is said to be an alcoholic, though she's never seen drinking. The main character takes prescription pills in one scene, but throws them away in another scene. Women are knocked out with chloroform.

Which Kids Will Like It? Kids 14 and older who like tense thrillers, though there are better options out there, like any Alfred Hitchcock film, to name a few.

Will Parents Like It? It's just not a great movie.

REVIEW: I'm having the same reaction to Amanda Seyfried in Gone as I had when Julia Roberts did Sleeping With the Enemy in 1991. I don't like it. I don't like seeing those sweet girls with the big eyes and wide smiles being stalked and terrorized. I don't like seeing them in dark emotional dramas. You leave my girls alone, stalkers! Let them return to what they do best! Making romantic comedies like Mamma Mia and My Best Friend's Wedding! And yes, I do realize I've gone completely 'round the bend here.

In Gone, Amanda Seyfried plays Jill, a young girl who survives a kidnapping that involved being knocked out with chloroform, abducted, and tossed into a big pit in the middle of the Pacific Northwest forest. (I should mention here that one good thing about this movie is that the scenery is fantastic. I thought I was watching Twilight at first.)

But the story actually begins several months after Jill's been abducted and found. After a stint in a mental hospital, she now lives with her sister in Portland, works as a waitress in an all-night café, and, as you might imagine, suffers terrible anxiety about her abduction.

As Jill arrives home one morning after work, she discovers that her sister is missing. She's convinced that her abductor has returned. Unfortunately, the cops never believed the story that Jill herself was kidnapped, and they don't believe this one either.

But Jill knows she has about 24 hours to save her sister's life, so she takes matters into her own hands, tracking the clues, avoiding the cops, and conning several people around town to achieve her goal of find the kidnapper. She actually does quite an amazing job of figuring things out on her own, but I guess once you've been in that situation, it makes you more aware of every little thing.

Gone is not a great movie. You can kind of see where things are headed from the very beginning, and much of the movie is watching Seyfried wander around town confronting people and trying to get some answers, sometimes drawing her gun on them to accomplish the task. On the other hand, she's tough, smart, resourceful and willing to go beyond her fear to save her sister, even if it means venturing into a dark forest in the middle of the night.

It also makes the cops look one-dimensional and really stupid, and I don't know if that's necessarily a good thing. Sure, there are some cops who probably have no idea what they're doing, but this movie makes the entire department seem like imbeciles.

I realize that Gone is rated PG-13, so the filmmakers can only go so far with the storyline. I guess that rating is meant to appeal to teenagers who maybe grew up watching Amanda Seyfried in other movies. Still, if you're looking for a good thriller that's ok for teens and adults, there are better options. Just rent any Alfred Hitchcock movie and you're good to go.