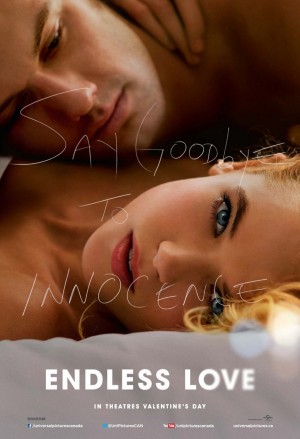 Genre: Drama, Romance, Remake, Based on a Book

SYNOPSIS: Alex Pettyfer and Gabriella Wilde star in this remake about a privileged girl and a charismatic boy whose instant desire sparks a love affair made only more reckless by her dad, who tries to keep them apart.

REVIEW: I probably saw the original 1981 "Endless Love," starring Brooke Shields and Martin Hewitt as the young lovers, but quite honestly, I can't remember it. That either says something about the movie or the fact that it's been more than 30 years and my brain is too crowded with the thousands of other movies I've seen since then. So let's just take a look at this new version on its own merit.

Based on a 1979 novel by Scott Spencer, "Endless Love" stars Alex Pettyfer as David, a teenager who on the day of his high school graduation laments the fact that he's never had the guts to ask fellow graduate Jade (Gabriella Wilde) out on a date. She comes from a wealthy family, and she's spent the last two years mourning the death of her beloved brother.

While on the job as a valet at a fancy restaurant, David finally summons up the courage to talk to Jade, and sparks instantly fly. They go crazy, in fact, and the two embark on a summer-long romance that everyone seems to be ok with except her strict father (Bruce Greenwood).

He has plans for his daughter. He wants her to follow in his footsteps and be a doctor. He doesn't want her to end up with a lowly car mechanic. That would be David, who works in his father's shop. His dad, by the way, is played by Robert Patrick (in my head as I'm watching the movie: "Wait, isn't that the first Terminator?!" It is indeed.) Despite her dad's attempts to keep them apart, Jade and David seem destined for each other.

I'm guessing this movie's target demographic is teen girls, who'll no doubt love the story about a gorgeous guy from the wrong side of the tracks falling for a privileged girl. He also has a heart of gold, and brings, in the words of Jade's mom (Joely Richardson), "light" to their family whose been grieving for two years.

Wilde is gorgeous, too. She reminds me a lot of Amanda Seyfried. That sort of sweet, young girl who's just finding her way in the world with wide-eyed innocence.

But the movie itself is soapy and predictable. Greenwood's character is so villainous he nearly takes a bat to David's head. It's coming back to me now - in the original, it was David's obsession that was the problem. In this version, it's Jade's dad that's the problem. In fact, his focus on her every move borders on disturbing.

But there are some funny moments, and the message here is that love doesn't concern itself with class, education or social status. (And isn't that kind of passe these days? I'm not upper-crust enough to know.)

There's also a lot of sex talk, among both teens and adults, and a few scenes where teens are either going to have sex or are having sex. They've graduated from high school, but still...

The message for parents? If your kid is clearly enamored with someone, and that someone seems to have a good heart and want the best for your offspring, maybe you should let them figure it out. The message for kids? Sometimes you have to fight for the person that you're meant to be with.

Sex/Nudity: Sparks fly immediately for older teens, who have sex soon after meeting. There's no mention of birth control, but the guy is respectful, says he's willing to wait, and allows his girlfriend to take the lead. There's no full nudity, but they're shown topless from the side and on top of each other. Teens kiss passionately several times, sometimes barely dressed or in only a bikini/swim trunks. A few scenes of them waking up together, and one where they share a bubble bath, but it's not graphic.

Violence/Gore: Jade is in a car accident that leaves her injured and temporarily hospitalized. David punches a disrespectful restaurant patron and later -- after much verbal abuse and provocation -- punches Jade's hateful father.

Drugs/Alcohol: High-school graduates -- note that they're still under 21 -- are shown drinking at a couple of parties. Some discussion about getting high.

Will Parents Like It? "Endless Love" is not a spectacular movie, but worth a look if you like romantic dramas or want to compare with the original movie or book.