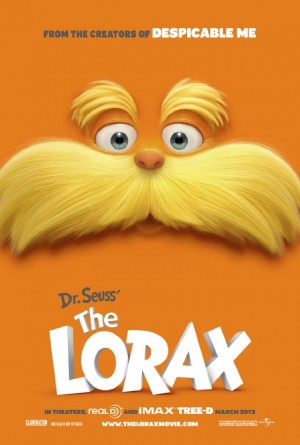 Genre: Family, Animation, Musical, Based on a Book

SYNOPSIS: To win the affection of the girl of his dreams, 12-year-old Ted must track down the impossible in a city where everything is plastic – a real tree. But first, he must learn the story of the Lorax, a grumpy but charming creature who fights to protect the environment.

Sex/Nudity: Ted has a big crush on Audrey, and they share a brief kiss at the end of the movie.

Violence/Gore. The Once-Ler uses a huge axe machine to chop down the colorful Truffula trees. In one scene, the Once-Ler and a baby Barbaloot (a cute teddy bear-like creature) float on a mattress toward a waterfall, but neither is harmed. Characters are hit in the face with various objects, like marshmallows and hammers, but no one is seriously injured. Mr. O'Hare threatens Ted and others, and his henchmen are big and foreboding. One scene features a barbaloot in a refrigerator – not a good image for little ones, who might try to climb into a fridge themselves.

Which Kids Will Like It? Kids 5 and older who like Dr. Seuss books and films, or movies with cute forest creatures, bright colors and fun songs.

Will Parents Like It? Despite numerous consumer tie-ins, it's still a cute story with a positive message about saving the environment.

REVIEW: You'd think that a family movie about environmentalism and corporate greed would be, you know, mindful about embedding consumer products at every turn. But I guess that's a lot to ask in this day and age of films getting made and sold through sponsorships. Still, Dr. Seuss' The Lorax includes more than 70 merchandise tie-ins, including:

The upside is that along with the rampant consumerism, there IS a positive message about saving the earth. You just wonder if it all balances out somehow.

The classic story, based on the 1971 book by Dr. Seuss, a.k.a. Theodor Seuss Geisel, takes place in the town of Thneedville, where everything is plastic and fake and brightly colored. There are no real trees, grass or nature trails, which is why all the townsfolk have to buy air in plastic bottles from greedy Mr. O'Hare (voiced by Rob Riggle).

But all that plastic stuff isn't enough for some people. When 12-year-old Ted (Zac Efron) learns that the girl of his dreams, Audrey (Taylor Swift), wants more than anything to see a real tree, he sets out to find her one. Encouraged by his Grammy Norma (Betty White), Ted rides his scooter to the edge of town, where he encounters a giant wall not unlike the one Jim Carrey encountered in The Truman Show.

But Ted pushes onward and ventures outside the wall, where he finds desolation and the reclusive Once-Ler (Ed Helms), who tells him the story of the Lorax (Danny DeVito), a small orange creature who "speaks for the trees." It all goes back to when the Once-Ler chopped down all the Truffula trees to manufacture the thneed, a piece of fabric with a variety of uses, from wearing it as a hat to carrying it as an umbrella.

But the Once-Ler doesn't paint a pretty picture. In his quest for wealth, it doesn't take long before all the trees are gone, along with the beautiful landscape and air quality, forcing the inhabitants to sadly move on in search of a home elsewhere.

If you can get past the blatant commercialism of Dr. Seuss' The Lorax, it's really a cute story with colorful animation, adorable creatures (including the talented Humming-Fish), a great soundtrack, and even a few splashy song and dance numbers. Directors Chris Renaud and Kyle Balda make full use of Ed Helms' quirky musical ability honed on The Office, and the rest of the star-studded cast do a fine job, as well. Danny DeVito is perfect as the curmudgeonly Lorax, and, of course, Betty White as Grammy Norma is still riding her awesome wave of success.

Passionate fans of The Lorax and Dr. Seuss' commentary on the perils of consumption and ecological missteps in praise of the almighty dollar might not be able to get beyond the commercialism surrounding this movie. But even with all that, I still think it touts a simple and clear message that even little ones can grasp: "Unless someone like you cares a whole awful lot, nothing's going to get better, it's not."