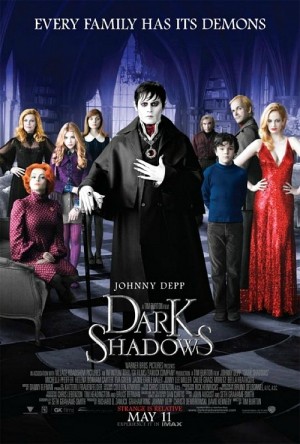 Genre: Comedy, Fantasy, Horror, Based on a TV Show

SYNOPSIS: Based on the campy gothic-soap from the late 1960s, Johnny Depp steps into the role of Barnabas Collins, the cursed vampire who's freed from his prison tomb after two centuries only to find his dysfunctional descendents dealing with their own secrets.

Sex/Nudity: Tons of innuendos, including references to people touching themselves, making noises, passionate kissing, and sexual encounters (some of them violently passionate). No outright nudity, but a female character rips off her top to reveal cleavage and lingerie, then places Barnabas' hand on her covered breast. Barnabas has sex with a witch, and they crash around the walls and ceiling of a room, breaking everything in their path. A female character lowers her head off-screen, presumably to give a male character oral sex. Also, 15-year-old Chloe Grace Moretz is sexualized in the way she dances and talks.

Violence/Gore: Though the trailer made this movie seem comical, it's a very dark comedy with plenty of violence and scary creatures, including a ghost. When Barnabas is freed from his coffin tomb, he attacks a crew of construction workers, kills them and drinks their blood. A supernatural fight between characters involves green projectile vomit, a human who turns into a creepy werewolf, and a house that "bleeds" (blood drips down the walls). A human walks deliberately off a cliff and plummets to their death. In a flashback, parents ship their little girl off to a scary asylum where she's locked in a cell and receives shock treatments.

Drugs/Alcohol: A female character has a drinking and prescription pill problem, and she's always drunk and/or hung over. A group of hippies smoke pot and act high around a campfire. A 15-year-old girl asks an adult if he's stoned.

Which Kids Will Like It? Kids 15 and older who like Johnny Depp or Chloe Grace Moretz, or are familiar with the classic TV series.

Will Parents Like It? It's an odd mix of comedy, fantasy and horror, but fans of Burton/Depp collaborations like Edward Scissorhands, Charlie and the Chocolate Factory and Alice in Wonderland will find something to love about this movie. The PG-13 rating edges toward an R in some scenes.

REVIEW: About half-way through Dark Shadows, I pulled out my phone to double-check the rating on my Fandango app (judiciously, that is – I swear I'm not one of those people with their phone out in a dark theater all the time).

Yep, it was PG-13, but parts of it definitely veered towards an R rating, especially one scene when Barnabas and Angelique have violent sex. We don't actually see them in the act, but it's certainly implied as they strip down and roll around the floor and walls and ceiling, breaking everything in their path.

The violence is also an issue, including a scene at the very beginning where Barnabas kills an entire construction crew and drinks their blood. Dark Shadows is one of those movies that would have benefited from a PG-15 rating. It's not quite R caliber, but still too intense for PG-13.

And if you're thinking this movie is an extended version of the cult TV show that aired from 1966 to 1971, they're really two different animals. Some of the same characters, but the movie is definitely a stand-alone story.

The story begins in 1760, with Joshua and Naomi Collins and their young son Barnabas setting sail from Liverpool, England to start a new life in Collinsport, Maine. Two decades pass, and Barnabas is a rich playboy with the world at his feet – until he crosses a servant named Angelique Bouchard (Eva Green) who turns out to be a witch. When he breaks her heart, she dooms him to a fate worse than death: turns him into a ghoulish vampire and buries him alive.

Two centuries later, Barnabas is inadvertently freed from his tomb and emerges into the world of 1972, complete with Lava Lamps, hippies, and shag carpeting. His once grand Collinwood Manor is in ruins, run by a ragtag family of dysfunctional descendents harboring their own secrets.

Unbeknownst to them, the family is still under the curse of Angelique. Her Angelbay Seafood company has driven the Collins family right out of business, and they'll have to pull together to set things right again.

Having grown up in the 1960s and 70s, it's really fun to see all the references in this movie: toy trolls (remember those?), Wheaties, Operation (the board game), vintage Scooby-Doo cartoons, and a soundtrack that includes Tommy Bolin, Alice Cooper (who makes a cameo), Curtis Mayfield, The Moody Blues, The Carpenters, and Donovan's Season of the Witch. It's a bit of a love letter to that era.

Johnny Depp has this unique ability to be confident, vulnerable and slightly disturbing all at the same time, but that's partly because of director Tim Burton's influence. Whenever those two get together, anything can happen. Throw Helena Bonham Carter into the mix, and it's a virtual free-for-all. At this point, those three probably read each others' thoughts.

It also occurs to me that someone should create a brand new genre for Tim Burton movies, because they defy any particular category. Dark Shadows is a mix of comedy, horror, fantasy, sci-fi, drama, and supernatural thriller. It's certainly entertaining, but also a bit disjointed, because you never know what's going to happen in the next scene. One minute a young family is boarding a ship to America, and the next, a creepy vampire is killing an entire crew of construction workers.

That said, there's a message here: Family is the only true wealth, and it doesn't matter if you're a vampire, a werewolf, or a ghost. If you're family, then you should put aside your issues and pull together for the greater good.

Look close, and you'll see a few cast members from the TV show at the Collinwood Manor ball: Jonathan Frid (the original Barnabas), Lara Parker (Angelique), David Selby (Quentin Collins) and Kathryn Leigh Scott (Josette DuPres). Sadly, this was Frid's last movie, as he passed away on April 13, 2012 at the age of 87.