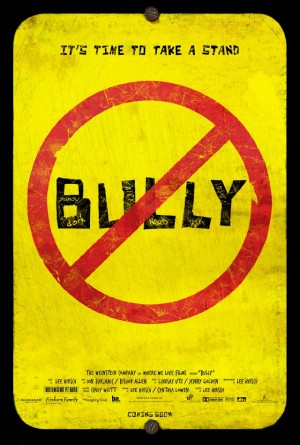 SYNOPSIS: With bullying in the school systems such a hot topic over the past few years, this documentary by Lee Hirsch couldn't come at a better time. It explores the tough subject by taking a close look at a few kids who've been targeted by bullies.

Sex/Nudity: A gay teen is bullied.

Violence/Gore. Teen/tween suicide is a focal point, with families and friends mourning the loss of their loved ones. Kids recount incidents of physical, verbal and emotional abuse, including choking, stabbing with pencils, hitting, punching, shoving and threats. One teen has a history of cutting and suicide attempts. One boy tells a younger boy on the bus that he'll shove a broomstick up his rear and cut him with a knife. A girl ends up in juvenile detention after being pushed too far and brandishing a gun at her tormenters on the bus. Guns are shown in a hunting context.

Profanity: Language is what landed this film an R rating, including several uses of "f**k," "s**t," a**," "p***y," "b*tch," and many derogatory terms for homosexuals, including "f*g." Brutal language and threats include an older boy on a school bus telling a younger boy, "I'll f**king end you and shove a broomstick up your a** ... I'll cut your face off and s**t."

Which Kids Will Like It? It's a tough film to watch, but one with the potential to have a positive impact on kids 13 and older.

Will Parents Like It? It's an eye-opening film, and one that's important for parents to see, partly because they may not be aware of the depth of bullying taking place in the school system.

REVIEW: It's my policy to not review R-rated films for my family movie syndicators, and in most instances, with the possible exception of The King's Speech, I've never questioned that policy. So I polled my syndicators and asked if they would be opposed to a review of Bully, a documentary that looks at bullying in school systems across the country. The film is rated R for language, although there's a big campaign to change it to PG-13.

The response was overwhelmingly in favor of me doing the review. Based on news reports and personal accounts, it seems clear that bullying has become more and more rampant in schools, many times with tragic consequences.

According to the film's official site, http://www.thebullyproject.com, more than 13 million American kids will be bullied this year, making it the most common form of violence experienced by young people in the nation.

But the documentary doesn't just give facts and figures. Filmed during the 2009-2010 school year, the film offers a close-up look at five kids who've been bullied and how it's affected them. It also documents how their families have been affected, as well as the responses – or in some cases, non-responses -- of teachers, administrators and community members.

The kids' stories are heartbreaking. Alex Libby is a sweet-natured 12-year-old boy in Sioux City, Iowa, who's tormented by bullies on the bus ride to and from school. He assures his parents that the kids are only "messing with him," but they don't know the full extent of those threats, which include horrible slurs, curses and threats. Things only get worse as Alex begins middle school. It's heart-wrenching when he tells his parents that if these kids aren't his friends, then he doesn't have any friends.

Ever since 16-year-old Kelby Johnson came out as a lesbian, she and her family have been treated like pariahs in their small town of Tuttle, Oklahoma. Once a star athlete, Kelby was forced out of her sports teams and is the target of hatred from both classmates and teachers. Her parents offered to move to a more open community, but the gutsy teen, bolstered by an adoring girlfriend and a few close friends, resolves to stay and make a difference. Like Alex, she's a sweet girl who smiles all the time, despite the bullying.

Ja'Meya Jackson is a quiet 14-year-old girl in Yazoo County, Mississippi. Picked on relentlessly during her hour-long bus rides to and from school, one day she snaps, takes a loaded handgun from her mom's closet, and brandishes it at the kids on the bus. Ja'Meya is charged with multiple felony counts and lands in a juvenile detention facility.

In October 2009, 17-year-old Tyler Long of Murray County, Georgia, hanged himself after years

of bullying from classmates and indifference from school officials. As his parents, David and Tina Long, mourn the loss of their son and demand accountability from the school, his death sparks a war in the community.

And then there's Kirk and Laura Smalley. Following the bullying-related suicide of their 11-year-old son, they're determined to prevent other kids from suffering a similar fate. Kirk launches an anti-bullying organization, Stand for the Silent, and coordinates a series of vigils to spark a change across the country.

Of course, I came home and immediately asked my two teenagers if they've encountered bullies in our local school system here in Traverse City, Michigan. They said they haven't, which could mean a couple of things: it's there and they just don't see it, or bullying is more prevalent in certain parts of the country. I'm inclined to think it's the second one.

But clearly, since Bully was filmed in real time over the course of a school year, it's an example of what some kids see and hear every day. The director, Lee Hirsch, did a Skype interview with the folks in the theater after the screening, and he said that after a while, people just ignored the cameras. It drills home the point that bullying is so ingrained in some kids that they'll do it even with a camera pointed at them.

Should Bully be rated PG-13? I believe it should, because the very people this film would help – school-aged kids – can't even see it right now, because of the R rating. A PG-13 rating would allow the film to be shown in schools in a controlled setting, giving teachers the opportunity to open a discussion with the kids. Ultimately, the film encourages kids to "stand up, not stand by," and reinforces the fact that everyone can make a difference, and "everything starts with one."

I realize you can only fit so much into a documentary, but I would have liked to see more about the lives and motivations of the bullies themselves. What sort of home life do they have that causes them to be so vicious to other students? And why aren't school administrators doing more to stop bullying? Parents expect school systems to be a safe place for their kids, and yet the administrators in this film come across as unhelpful, inflexible, and just plain oblivious to bullying.

And here's my public service announcement. If you'd like to sign the petition to change the rating of Bully to PG-13, visit the film's change.org page started by Michigan high school student Katy Butler.

If you don't feel called to do that, visit the film's Facebook page and official site to learn more about the film and The Bully Project, as well as how you can make a difference in your own school system and community.