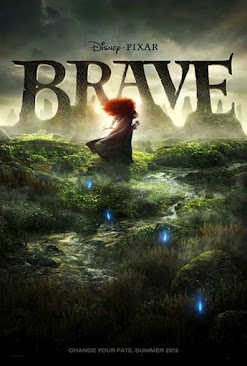 MPAA Rating: PG for some scary action and rude humor

SYNOPSIS: Determined to write her own life story, Princess Merida bucks Scottish tradition and asks an old witch to cast a spell and change her fate. Things go awry, and Merida must rely on her bravery and archery skills to undo a beastly curse.

Sex/Nudity: A housemaid has ample cleavage. King Fergus and Queen Elinor are an affectionate married couple who flirt playfully. At one point, she's naked under a covering and he stares at her until she reminds him that others are present, too. A Scottish man "moons" a group of people by lifting his kilt to show them his rear end (we don't see it). In another scene, naked rear ends of adult men and boys are briefly glimpsed.

Violence/Gore: Much of the movie revolves around scary scenes of a large, frightening bear. King Fergus is attacked, and the bear rips his leg off (we don't see it), leaving him with a wooden stump. When Elinor is transformed into a bear, she's hunted through the castle and into the forest, with the men intent on killing her (they don't realize it's Elinor). At one point, she growls menacingly at Merida. The witch's cabin is dark and spooky, and the will-o'-the-wisps might be frightening for young kids. The Scotsmen fight and brawl, using both fists and weapons.

Drugs/Alcohol: A feast in the castle includes steins of beverages, presumably ale, but it's never mentioned.

Which Kids Will Like It? Kids 7 and older who like animated Disney/Pixar movies or movies with strong female characters.

Will Parents Like It? Yes, it's a sweet movie with a powerful message about family, mother-daughter relationships, and creating your own destiny. Kids also learn about Scottish culture, lore, customs, and the fact that noble girls were often forced to marry out of obligation and alliance rather than love.

REVIEW: Sometimes a movie comes along that's so gorgeous and magical that you want to tell everyone to go see it. That movie is Brave, Disney/Pixar's latest story about a ginger-haired heroine who learns the hard way that you shouldn't mess around with witches and spells.

Kelly Macdonald voices teenaged Merida, a wild-haired Scottish girl who loves nothing more than to hop on her horse and gallop away from her father's castle into the wilderness, shooting arrows at trees, climbing steep cliffs, and quenching her thirst at sparkling waterfalls.

But as per the kingdom's protocol, Merida must learn the proper etiquette befitting a future queen. That means dressing up in fine clothing (who can shoot arrows in this garb?!), clashing with her regal mother Queen Elinor (Emma Thompson), and enduring a ceremony in which the realm's three other clans present their leaders' firstborn sons as potential husbands for Merida.

It's all too much for the strong-willed girl, who leaps to her feet, grabs her bow and arrow, and proclaims, "I am Merida, and I'll be shooting for my OWN hand!" Of course, by this time, it was all I could do not to leap to MY feet in the theater and begin cheering wildly.

But I managed to keep it together, as Merida shoots an arrow dead center at the target, argues with her mother, and runs away into the forest to weep about her destiny. A will-o'-the-wisp (ghostly light seen by travelers at night in bogs, swamps and marshes) leads her into the forest to a cabin owned by an old witch (Julie Walters), who conjures up a magical cake guaranteed to change the Queen's attitude.

But when the Queen takes a bite, she's changed into a big hulking bear – exactly like the bear that took King Fergus' (Billy Connolly) leg years earlier. Much drama ensues as Merida tries to get her mom changed back, while keeping her dad from killing her mom in bear form.

I love everything about this movie. The animation is stunning -- Merida's blazing red curls light up the movie screen, and the lush landscapes and haunting blue will-o'-the-wisps are crisp and gorgeous. The voice acting is superb, thanks to a mostly Scottish cast who get to use their thick accents to the hilt. And the fragile mother-daughter relationship is one I'm sure many moms and daughters will find familiar.

But mostly I love that this is a princess story focused on the girl's own personal development rather than her romantic interests. We've seen this before in movies like The Princess and the Frog and Tangled (two of my favorite family movies), but Brave takes it to a new level, and shows that even in strict kingdoms, there's still room for change.

The music is so lovely, including the tunes "Touch the Sky" and "Into the Open Air" by Scottish folk singer Julie Fowlis, it makes your heart weep with joy. And even though Brave is centered on a female character, there is enough action and funny lines to make it a winner with both boys and girls.

Be sure to get into your seats early enough to see the beautiful 7-minute short La Luna, which shows prior to the movie. It's a thoughtful story about a young boy going to work – a most unusual line of work -- with his Papa and Grandpa for the very first time. It's Pixar at its very best.