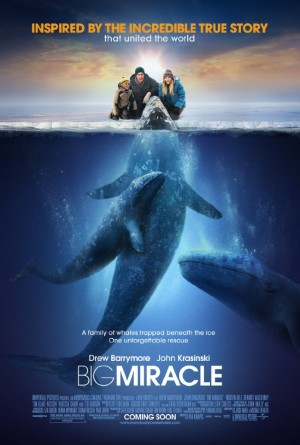 Genre: Comedy, Drama, Romance, Based on a Book

SYNOPSIS: It's 1988, and news reporter Adam Carlson (John Krasinski) is in the tiny town of Barrow, Alaska, when he unintentionally discovers a family of three gray whales trapped in the icy waters off shore. Soon, his ex-girlfriend (Drew Barrymore) and a bevy of reporters and environmentalists head north to help the whales reach open water.

Violence/Gore. A whale is harpooned off-camera by an Inuit tribe. A whale is injured while trapped in the ice, and his breathing is labored. A helicopter ride becomes perilous and tense. People are devastated after a whale dies.

Drugs/Alcohol: A character gets drunk while lamenting her work situation; mini bottles of scotch are seen on a table. Social drinking in a restaurant.

Which Kids Will Like It? Kids 8 and older who like whales, environmental stories, Drew Barrymore or John Krasinski.

Will Parents Like It? It's a sweet movie and a good reminder that even when things look grim, there's always something you can do to help.

REVIEW: There's something really compelling about whales. Is it their size and power? The fact that they swim in the ocean underneath our tiny boats? Or the fact that even though they could wipe out a small town with one swipe of a flipper, maybe they're not so different from us after all.

Whatever the reason, any time a whale pops up in a movie, I'm so there. In Big Miracle, we get not one, but three whales, along with the incredibly adorable Drew Barrymore and John Krasinski. It's almost too much cuteness for one movie, but there you have it.

Based on the book Freeing the Whales by Thomas Rose, Big Miracle tells the real-life story that happened back in 1988. John Krasinski plays Adam Carlson, a news reporter covering stories in the tiny town of Barrow, Alaska. When he inadvertently discovers a family of three gray whales trapped in the icy waters off shore, he realizes this could be the big story that gets him out of the sticks and into a cushy job in the Lower 48.

Adam's story gets picked up by the national press, attracting the attention of everyone from Tom Brokaw to a White House staffer in Pres. Reagan's administration to ex-girlfriend Rachel Kramer, a Greenpeace activist who immediately flies to Barrow to help organize efforts to get the whales back to open sea.

It also attracts the attention of oil baron J.W. McGraw (Ted Danson), who sees the situation as a way to bring environmentalists onboard with his Arctic oil-drilling efforts, and Jill Jerard (Kristen Bell), an ambitious Los Angeles reporter looking for a scoop.

There's no doubt this movie has a lot going on; stories focused on saving the whales; oil-drilling in the Arctic; a culture clash with the whale-harvesting Inuit tribes; push-pull between a National Guard officer (Dermot Mulroney) and Pres. Reagan; and the fact that the U.S. government asks the Soviet Union for help in freeing the whales. By the way, did Pres. Reagan actually call Mikhail Gorbachev "Gorby"? No idea, but I guess the scene where he calls him on the phone is played for laughs.

Somehow, though, it all works, probably because this story really happened back in 1988, and we see evidence of that when archival footage plays as the end credits roll. Plus, if you were around in the 1980s, you'll get a kick out of the shout-outs to Walkmans, Def Leppard, big hair and shoulder pads. It was also filmed on location in Anchorage, Barrow, and Fort Richardson, Alaska.

Most of all, though, Big Miracle is an entertaining, educational family movie that both kids and adults will like – especially if you have a thing for whales.