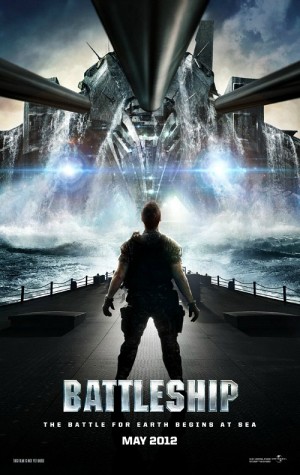 MPAA Rating: PG-13 for intense sequences of violence, action and destruction, and for language

Genre: Action, Sci-Fi, Thriller, Based on a Board Game

SYNOPSIS: Battleship bears little resemblance to the Milton Bradley board game upon which it's based, but star Taylor Kitsch gives this special effects-heavy flick panache. It's a showdown of military personnel vs. aliens.

Sex/Nudity: One scene of a couple in bed; the guy is shown wearing just a towel after coming out of the shower. A female physical therapist wears form-fitting or revealing clothes, including one scene in which she wears a string bikini top and short shorts. A few passionate kisses.

Drugs/Alcohol: A bar scene includes people drinking, and two adult brothers do shots for a birthday. A main character gets drunk and makes questionable decisions.

Which Kids Will Like It? Kids 13 and older who like sci-fi action movies with aliens, military tactics, and massive ships with heavy artillery.

Will Parents Like It? Battleship isn't the best action movie of the year, but the special effects are memorable (especially the aliens) and there are some cool scenes involving military personnel and aging veterans.

REVIEW: I've been a fan of Taylor Kitsch ever since I interviewed him when Friday Night Lights premiered on TV in the fall of 2006. Some people just have that special "something," and you know they're destined to be a big star. Kitsch, who excels at playing handsome rogue with a heart of gold characters, has that, even in a movie like Battleship which, for all practical purposes, is a big cheesy popcorn flick with cliché dialogue like "I've got a bad feeling about this" and "We're gonna need a new planet."

But look, what can you expect from a movie that bears so little resemblance to the 81-year-old Milton Bradley game of strategy on which it's based that you might as well be playing Candyland. Some of us might remember the board game released in 1967, but Battleship was originally a pencil and paper guessing game that pre-dates World War I.

But of course, that's not nearly exciting enough for this day and age, so you have to add aliens in big metal machines, special effects galore, a slacker kid brother, a gorgeous love interest, and Liam Neeson in his usual god-like role. Blockbuster? Well, maybe, depending on your definition of blockbuster.

Kitsch plays Hawaiian beach bum Alex Hopper, who on his 26th birthday gets a message from his older brother Stone (True Blood's Alexander Skarsgard): "Clean up your act or join the Navy."

So Alex joins the Navy, where Stone is an officer, and four years later, he's a hot-headed lieutenant trying to summon the courage to ask the Admiral (Neeson) for his daughter's (Brooklyn Decker) hand in marriage. Alex chickens out, and soon finds himself in the middle of a war games exercise with the Japanese when a group of unidentifiable objects appear in the Pacific Ocean and create an impenetrable field around three ships.

When two of the ships are destroyed by the objects – identified as aliens – Alex ends up as senior officer and must cooperate with the Japanese to bring down the aliens before they destroy the planet.

Sigh ... There's really only so much you can do with aliens at this stage of the game. Everything's been done before (though we'll see what the upcoming Prometheus brings). So that's where the characters come into play, and Kitsch is the star attraction here. As mentioned, Liam Neeson is playing his usual god-like role, Alexander Skarsgard is tough to see as anything other than vampire Eric on True Blood, Brooklyn Decker is the sexy girlfriend, and Rihanna, who plays a tough-as-nails weapons officer ... well, she should probably stick to singing.

It's not all bad news, though. There's a very funny scene where some real-life aging veterans, some in their 90s, spring into action with AC/DC's Thunderstruck playing in the background. That alone is worth the ticket price. Gregory Gadson, a bilateral above-the-knee amputee, real-life 20-year Army veteran, and director of the Army's Wounded Warrior Program, is a real scene stealer battling the aliens. And it's hard to completely dislike a movie where Sun Tzu's The Art of War is a key plotpoint.

And the characters have several redeeming qualities, like displaying leadership and courage under fire, learning to work with others, even sacrificing themselves for the greater good. It's a great movie to release right around Memorial Day.

Be sure to stay through the credits, and watch for one of the old veterans uttering a version of that classic line from the 1960s Battleship commercial: "You sunk my battleship!"