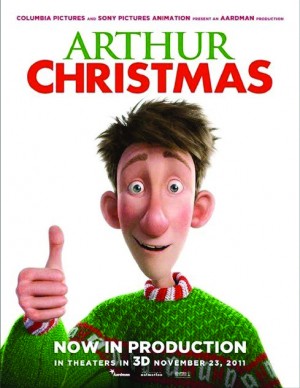 SYNOPSIS: Reindeer and a sleigh are soooo last century. Now Santa delivers presents in a high-tech hovercraft controlled by a North Pole command center that makes NASA look like the Pony Express. But when one present doesn’t reach its destination, Santa’s son Arthur takes action, despite the misgivings of his brother Steve, who helms the command center with military precision.

Sex/Nudity: We see Santa and Mrs. Claus in bed together, but there’s nothing sexual. A few kisses between elves when they return home.

Violence/Gore. Lots of the humor is based on the fact that Arthur is clumsy, scared of heights and completely lacking in self-confidence. So he’s always tripping and falling, has major panic attacks at inopportune moments, and has to talk himself into fulfilling his mission. Another obstacle includes a guy who comes out of his house, thinks Arthur, GrandSanta and Bryony are aliens, and fires a gun at them. The trio also encounters wild animals in Africa, a formidable-looking dog, and various perils as they attempt to deliver a gift (i.e. their sleigh bursts into flames after it’s hit by missiles). There’s also a military vibe to Santa’s command center and elves.

Profanity: GrandSanta calls his son Santa a few nicknames and has a few odd lines throughout the movie, like “They used to say it was impossible to teach women to read,” “At least have the decency to finish us off with a rock,” and “We need a blunt instrument – knock him out and regroup.” You get it in the context of a crotchety old man, but it’s still a little edgy for a family film.

Drugs/Alcohol: GrandSanta recalls giving an elf a “double whiskey” to forget about something. We don’t see him drinking, but he seems tipsy and there are alcohol bottles in his room.

Which Kids Will Like It? Kids 6 and older who like fun, animated films about Santa and the holidays. It’ll also ring true for plugged-in kids who love their tech toys.

Will Parents Like It? Yes, this movie is heartwarming and full of positive messages, including the importance of generosity, family unity, and going the distance to do what you believe is right. It’s not a religious movie, although there are a couple of small things that could be construed that way: “In Santa We Believe” is the command center’s logo, and “Silent Night” is sung to calm some wild animals.

REVIEW: Who knew that Santa was so high-tech these days?! The days of eight tiny reindeer and a sleigh brimming with toys are long gone. Now Santa delivers presents in a glistening, state-of-the-art hovercraft complete with stealth ninja elves who deliver gifts to homes a la Tom Cruise in Mission Impossible.

Back at the North Pole command center, Santa’s son Steve (Hugh Laurie) is running the show with military precision and hoping that he’ll take over Santa duties next year. But when the hovercraft returns and everyone is patting themselves on the back for a job well done, the cleaning elves discover the unthinkable -- an undelivered gift.

That’s when Santa’s younger son Arthur (James McAvoy) organizes a covert mission to make sure that pink bicycle gets to its intended recipient – a little girl in Cornwall, England. Joining forces with GrandSanta (Bill Nighy), expert gift-wrapping elf Bryony (Ashley Jensen), and some out-of-practice reindeer, the ragtag group dusts off an ancient sleigh and sets off for the ride of their lives.

You have to hand it to the filmmakers for putting a new spin on a story that’s been done a thousand times. The familiar tale of Santa gets a modern makeover with high-tech gadgets, stunning visuals, an incredible cast, and a heartwarming story of family, faith and perseverance.

McAvoy’s voice is perfect as Arthur, the shy guy who spends his days holed up in a small office answering kids’ letters to Santa. He’s so earnest about his job that he’ll go way out of his comfort zone to make sure that little girl gets her gift. But it goes beyond that. Arthur also wants to ensure that she doesn’t wake up on Christmas morning and feel like Santa’s forgotten her.

Once Arthur makes the decision to deliver that gift, we get to ride along on the doomed journey where he, GrandSanta and Byrony all learn something about themselves and find the strength to overcome their fears and carry out their mission when all seems lost.

I know, that’s pretty heavy for a kids’ movie, right? But it’s done in such a way that it doesn’t seem heavy at all. Arthur Christmas walks that fine line between giving audiences an entertaining movie and slyly embedding important messages for both kids and adults.

It’s not often that a family movie takes you on an emotional journey, but Arthur Christmas does just that, thanks to the pairing of Sony Pictures Animation and Aardman Animations, the creative British team behind Flushed Away, Chicken Run and the Wallace & Gromit films.

Be sure to get in your seats early enough to see the cute Justin Bieber music video, “Santa Claus is Comin’ to Town.” Nothing like some snappy singing and dancing to get us in the holiday spirit.