ALVIN AND THE CHIPMUNKS: CHIPWRECKED 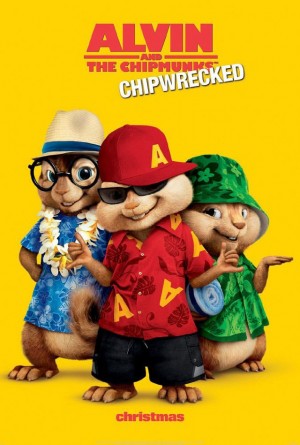 SYNOPSIS: While playing around aboard a cruise ship, the Chipmunks and Chipettes accidentally go overboard and end up marooned on a tropical island (because that's what they do). But their new locale is not as deserted as it seems, and danger is afoot.

Sex/Nudity: The Chipmunks and Chipettes are portrayed as romantic couples, especially Simon and Jeanette, who are referenced as going on "a date". Simon gets bit by a poison spider and changes personality, turning into a French lover who romances Jeanette, hugs her, kisses her hand, and saves her from danger. The Chipettes dance provocatively and wear skimpy outfits, including skirts and bikinis on the island. In one scene, they have a dance-off with three human girls dressed in tight dresses. With towels wrapped around their bodies, the Chipettes sing "I wave my tail back and forth" (a la the Willow Smith song "Whip My Hair"). Alvin flirts with a woman at the cruise ship casino. Dave gets hot gravy spilled on his groin area, and Ian says he's not wearing anything under his duck suit.

Violence/Gore. Mild peril and slapstick violence includes Alvin's shenanigans on the cruise ship, which results in all the chipmunks taking off on a paraglider, becoming separated from the ship, landing in the ocean, and washing ashore on a deserted island. Dave and Ian soon follow suit. On the ship, Theodore gets frightened while watching a movie called Jungle Monster (it's not all that scary, though, and probably won't frighten little ones). A few scenes involve the chipmunks and humans in perilous situations, like navigating across a shaky log above a precipice, dodging fireballs from an active volcano, and getting chased by a scary fish. A greedy island dweller captures Jeanette and lowers her into a dark area to retrieve a hidden treasure.

Profanity: A few insults like "fat" and "no you didn't."

Which Kids Will Like It? Kids 6 and older who liked the other Chipmunks movies.

Will Parents Like It? You'll probably doze off, so just schedule a nap during the movie.

REVIEW: Why Dave Seville (Jason Lee) hasn't lost his mind yet is a mystery. Think your kids are a handful? Try keeping six independent chipmunks in line, especially mischievous Alvin, who not only wreaks havoc during their Carnival Cruise commercial, I mean vacation, but manages to get separated from the ship during a paragliding incident, taking the other chipmunks along with him. The gang ends up being washed ashore on a tropical island that's not as deserted as they think.

So begins this cute caper that probably won't appeal to anyone but the under-six set, so consider scheduling a nap during movie time. The thin story seems designed to sell products, not only the aforementioned Carnival Cruise Lines, but also Swiss Army knives, YouTube and Electronic Musician Magazine (which I didn't even know existed, so mission accomplished on that one).

While enroute to the International Music Awards, the humans and chipmunks, as mentioned, inadvertently end up on a tropical island, where they make do as best they can. For the Chipettes, that means singing soulful songs and crafting tropical apparel (with bikini tops – is that necessary for a kids' movie?). For the Chipmunks, that means scouting the area for food and supplies. In Simon's case, it also means getting bit by a poisonous spider which alters his personality to "Simone," a cross between Charlie Sheen in Platoon and "the most interesting munk in the world" (from that beer commercial starring "the most interesting man in the world").

There's one of the problems with this movie: they try to throw in adult references to make it interesting for adults, but it doesn't work. We really don't care that Zoe (Saturday Night Live's Jenny Slate), the girl who's been shipwrecked on the island for several years, has several inanimate "friends" a la Tom Hanks' soccer ball Wilson in the movie Castaway.  Nor is it all that amusing when one of the Chipmunks gives us the James Bond "shaken not stirred" line when he's on the cruise ship.

Another interesting element is when Theodore changes personality into "Simone": they have Alan Tudyk ("Wash" from Firefly) voicing the character. Look, the Chipmunks all sound pretty much the same, so I'm not sure people really notice the different voice.

Here's the thing. The Chipmunks are pretty cute at first glance, and even their array of pop tunes, including covers of Bad Romance and Born This Way from Lady Gaga, Trouble from Pink, and Survivor from Destiny's Child, are fun. But they're only fun for about ten minutes. Then they get really annoying.

There is, however, a takeaway message when Alvin realizes that "Simone" is driving him crazy just like HE drives Dave crazy. I'm guessing this revelation doesn't totally reform Alvin, though. I'm sure he'll be back disobeying the rules in future movies.

One bonus is the cute Scrat short at the beginning of the film called Continental Crack-Up, Part 2. I don't know that it's the best of the Scrat tales, but it's always fun to see that crazy saber-toothed squirrel try unsuccessfully to nab that elusive acorn.