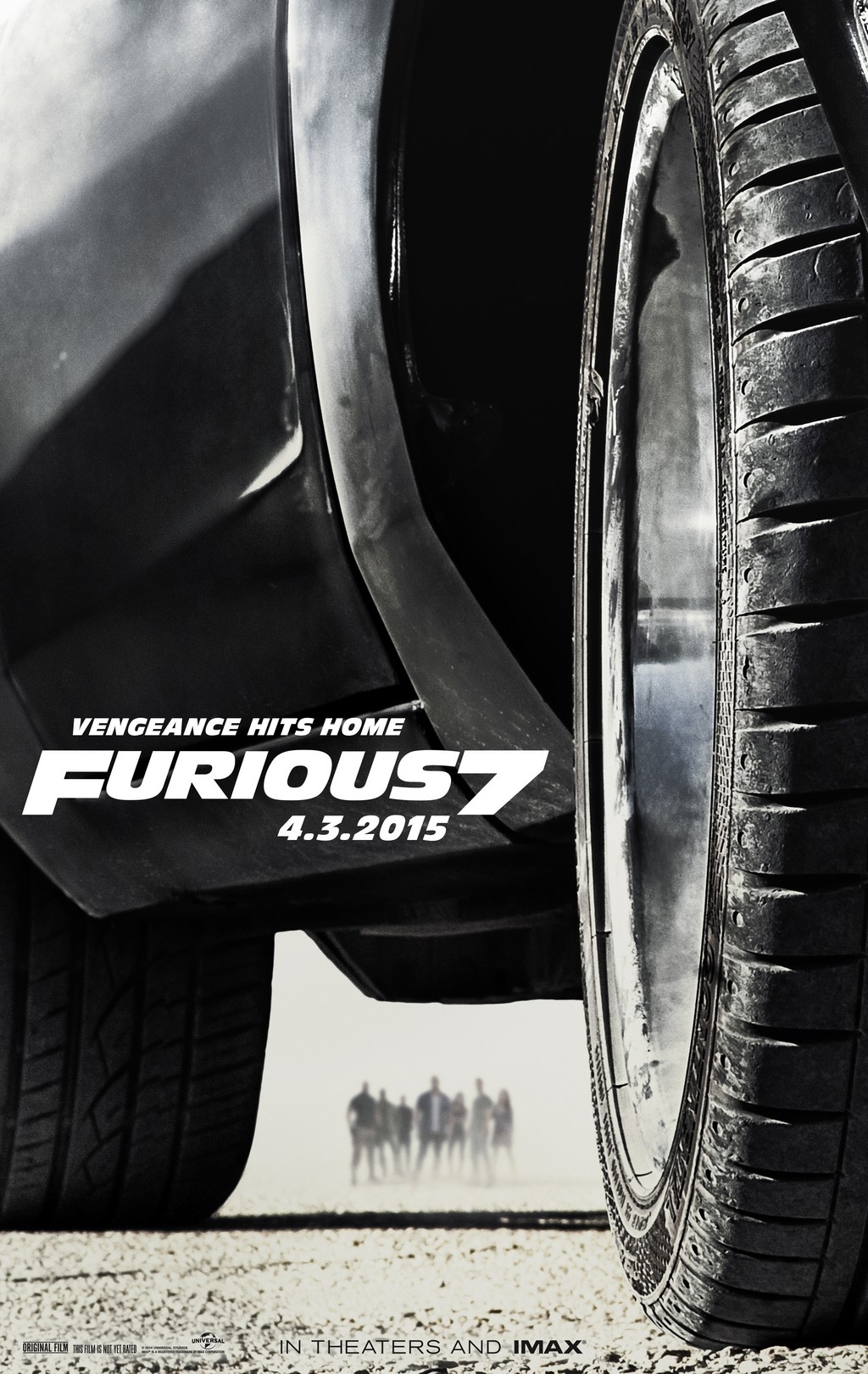 SYNOPSIS: The gang is back in this seventh installment of the high-octane franchise, in which Deckard Shaw (Jason Statham) seeks revenge against Dominic Toretto (Vin Diesel) and his family.

REVIEW: I love these "Furious" movies. They're reliable, you know what you're getting, and the stunts keep getting wilder and wilder. Just when you think they can't get any more ridiculous, cars parachute out of planes and Vin Diesel drives a car from one skyscraper to another. And I don't mean at ground level. Good grief. It's awesome.

The story begins with Deckard Shaw (Jason Statham) visiting his brother, Owen, in the hospital. Owen was defeated by the "Furious" team in "Fast & Furious 6," and now Deckard is seeking revenge for his brother.
So he kills one team member, and Hobbes (Dwayne "The Rock" Johnson) ends up in the hospital with two broken limbs. Meanwhile, Dominic (Vin Diesel), Brian (Paul Walker), Letty (Michelle Rodriguez), Roman (Tyrese Gibson), and Tej (Chris "Ludacris" Bridges) rally together to come up with a plan for retaliation.

New to the franchise is a mysterious guy (Kurt Russell - how cool to see him on screen again) who offers some assistance to the team in their quest to get Shaw. Of course, there's a condition. They must agree to rescue a hacker named Ramsey (Nathalie Emmanuel) who possess an important device that could change everything. Djimon Hounsou plays another bad guy hot on their trail.

Yes, the dialogue in "Furious 7" is cheesy. Yes, we know how things will end (or ... do we? ... I won't reveal too much). And of course, the stunts are awesomely insane. I was holding my breath through half the movie. But that's why I love this franchise. I've always had a bit of a crush on Vin Diesel, and Jason Statham and Kurt Russell are welcome additions.

More than ever, "Furious 7" is all about family -- both biological and friendship. There's also a poignancy about this movie because of Paul Walker's tragic death in a car accident last year. With the help of digital magic, his brothers actually stood in for his uncompleted scenes.

And the ending - oy. Again, I won't reveal too much, but let's just say I got weepy with how they ended it so brilliantly. I'd watch it again just for the ending. I've heard rumors that "Fast & Furious 8" is already in the works. Can't wait to see how they'll top the stunts of "Furious 7"!

Sex/Nudity: Women are shown in revealing outfits and bikinis. No sex scenes, but some kissing and strong innuendo throughout the movie.
Violence/Gore: This movie is action-packed from start to finish, including fist-fights, grenades, bombs, explosions, car chases and crashes, martial arts, a female fight, gunfire, and cars falling from cliffs and parachuting out of airplanes. The body count is high.
Profanity: One use of "f--k," as well as frequent uses of "s--t," "goddamn," "bitches" and more.
Drugs/Alcohol: Characters drink beer in several scenes, and there's a running storyline about favorite types of beer.
Which Kids Will Like It? Kids aged 14 and older who like the previous "Furious" movies or fast-paced action-thrillers.
Will Grownups Like It? If you liked the other "Furious" movies, you'll love this one, which delivers more of the same high-octane thrills.