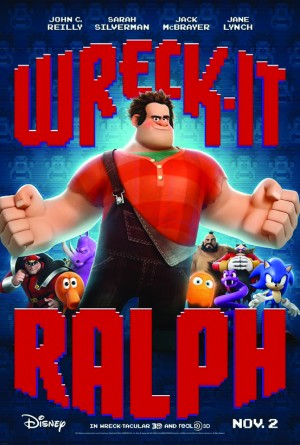 MPAA Rating: PG for some rude humor and mild action/violence

SYNOPSIS: When a video game villain named Wreck-It Ralph (voiced by John C. Reilly) decides he doesn't want to be the bad guy anymore, his quest to fulfill his dreams brings havoc to the whole arcade where he lives.

Sex/Nudity: Jane Lynch's character Calhoun is shapely and wears a skin-tight soldier suit. Two characters kiss (twice), fall in love and get married. One game character, a male wrestler, wears only his underwear, and it's referenced in another scene.

Violence/Gore: Video game violence throughout the movie, especially when Ralph enters a game called Hero's Duty. Characters fire weapons at aliens, and an alien ends up invading another game, bringing peril to all those characters. During a "Bad-Anon" meeting, a character grabs a zombie's heart out of his chest, then puts it back; no damage is done and the zombie is fine. In a flashback, a character is eaten by an alien bug, causing sadness to another character. Ralph is a "wreck-it" character, so he wrecks things in his own game, and sometimes other games. Calhoun punches and hits people throughout the movie, including one scene where the punching is necessary for the characters to survive. References to the fact that if a character dies outside of their own game, they can't regenerate (one character dies inside his own game and is able to regenerate). If a game is unplugged (put out of order), the characters end up homeless and on the street. Another character has a "glitch," meaning her code is unstable and she flashes on and off, which causes other characters to bully her.

Profanity: Calhoun is especially insulting to characters throughout the movie. Language includes "brat," "doody" (as in poop), "numbskull," "pussy willows," "shut your chew hole," "freakishly," "butt load of frosting," "nearly soiled myself," "chump," "peeped in your big boy slacks," and "junk pile." A character tells another, "I hate you." "Shut up and Drive" by Rihanna plays during one scene.

Drugs/Alcohol: Character are briefly seen drinking at a party. In one scene, a character pours himself a martini. In a game called Tappers, characters drink root beer from beer mugs. Villains attend a "Bad Anon" meeting to discuss their feelings and recite the "Bad Guy Affirmations."

Which Kids Will Like It? Kids 7 and older who like fast-action movies or movies involving video game characters.

Will Parents Like It? It's no Toy Story, but the characters are well written and the overall message is good: you matter, even if you're a villain in a video game. This movie will also appeal to adults who played lots of retro arcade games.

REVIEW: The best family movies, like Toy Story, Finding Nemo and The Incredibles, are really all about the story and characters. If you have a good story and believable characters, the rest of the movie is secondary. Wreck-It Ralph is no Toy Story, but it's a well-made movie with good writing and characters, and enough retro arcade game references to keep adults from dozing off in their theater seats.

Like Toy Story, however, the story revolves around characters that spring to life when humans leave the room -- or in this case, when the video arcade shuts down for the night. Apparently, video game characters have real lives outside of their games -- homes, relationships, feelings, even a place called "Game Central Station," which looks much like the real Central Station, only the portals all lead to various games. If you look close, you'll see "15A125V White" in Game Central Station -- that's the real-life marking on an electrical power strip the arcade games would be plugged into. The gamer forums are going nuts over that little detail.

The story centers on a video game character known as Wreck-It Ralph (voiced by John C. Reilly). After 30 years of playing the villain in an arcade game called Fix-It Felix Jr. (Jack McBrayer voices that character), Ralph decides he doesn't want to be the bad guy anymore. No one respects him, he's shunned by the other characters, and he has to live in a dump (an actual dump filled with cast-off game parts) while the other characters live in a nice building where they eat pie and have parties.

When Ralph learns he'll be respected if he earns a hero's medal in another game, he grabs the next shuttle out of Game Central Station and ends up in a first-person shooter game called Hero's Duty. It's a rough world inside this game, where aliens, heavy artillery and soldiers abound. Also the rough-talking Sergeant Calhoun (Jane Lynch).

In another game called Sugar Rush, Ralph meets Vanellope von Schweetz (Sarah Silverman), who's dealing with her own issues. She's a "glitch," meaning her coding is faulty. She flashes on and off, and has to endure the bullying of other characters. Because of this glitch, she's not allowed to participate in the annual kart race, where winning characters are available to be chosen by the human gamer.

Ralph and Vanellope form an alliance to help each other out -- he wants his hard-earned medal back; she wants to participate in the race. Together, they realize they're both special in their own way and neither one needs to change one pixel.

Wreck-It Ralph is a fun movie. Kids will love the fast action and colorful characters, while adults will  enjoy Disney's creative interpretations of iconic video game characters, coding, wires and pixels. Retro games referenced include Pac Man, Undead Apocalypse 3, Hero's Duty, Space Invaders, Finish Line, Sugar Rush, and of course, Fix-It Felix. No Donkey Kong, but maybe they're saving that for the sequel, of which I'm sure there will be one.

Other fun references for adults: A scene involving Oreos with that marching song from The Wizard of Oz, the explosive relationship of Diet Cola and Mentos, and the Midi arcade music that plays throughout the movie. There's also a great shout-out to people who aren't keen on the whole Disney Princess thing. Instead of a princess, we get a constitutional democracy where the girl gets to be president. Love that.

Wreck-It Ralph contains a little too much rude humor for kids, especially Lynch's Calhoun character, who ramps up the trash-talking to decibel levels. But she's got her own backstory as to why she's that way.

But the movie's overall message is good: you matter, even if you're a villain in a video game. After all, the game can't go on without you, and if you leave, the game might be unplugged, putting other video game characters out of work.

Be sure to get in your seat early enough to see the Disney short, Paperman, a beautifully animated romance involving a man, a woman, a bus station, and paper airplanes. Trailers playing in front of Wreck-It Ralph include The Croods, Dino Time, The Hobbit, Legend of the Guardians, Despicable Me 2, Oz: The Great and Powerful, and Monsters, Inc. 3D.