What to Expect When You’re Expecting…a Puppy 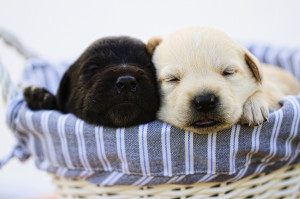 You've found an irresistible furry companion at your local pet store, breeder or shelter, and decided to make him or her part of your family. While the joys of puppy ownership far outweigh the hardships, there are some issues that can arise when you bring home your new friend.

Here are a few tips to help new puppy parents make the most of their first few weeks with their new "baby," and how to keep from becoming overwhelmed by unwanted puppy behavior.

Problem: Going potty where they shouldn't
Kristen Austin of Hewitt, and her husband Curtis, adopted their new puppy, Pudge, the beginning of August. At just 12 weeks old, this tiny canine can't even get off the couch by himself. This presents a problem when he's in need of a patch of grass to do his business.

Solution: Use kindness and guidance
"We've resolved this problem by taking him outside right after he gets out of his kennel, when gets through eating, when he starts sniffing around the floor  and when he gets restless on the couch," she said.

It can be frustrating if your new friend is using the carpet or your expensive coffee table to relieve himself, but experts at PetMD.com say it's important not to show cruelty or anger when your puppy makes a mistake. They suggest sternly saying "no" or refusing to give the puppy attention when they act inappropriately.

And if you want your puppy to use a certain area in the yard to do his business, experts at 3LostDogs.com suggest taking him to that spot—guiding him with a leash—each time you take him outside to go potty.

Problem: Using fingers and toes as chew toys
Austin said her long-haired terrier/Chihuahua mix puppy's favorite pastime is nibbling on fingers and toes. This is a common issue among young dogs because they just want to chew on everything, and your extremities are just too tempting not to try.

Solution: Stop the behavior before it becomes a problem
Although it is difficult to resist scolding her adorable puppy, Austin said she and her husband are quick to stop the biting when it begins.

Experts at PetMD.com say this is the right way to go. While your puppy's bites might not hurt now, they will when he gets older. If he thinks it's okay to bite when he's nibbling on your fingers with his baby teeth, then he's going to think it's okay to chomp down on those same fingers when his mouth is full of adult teeth.

Although it is important to let your puppy know that this behavior is unacceptable, don't take the biting personally. Most puppies are not biting out of aggression, just playfulness and the urge to chew.

Problem: Waking up multiple times during the night
Like most babies, your little canine will wake often during the night and want your attention. The problem is that if you respond to each whimper or request to leave his kennel, it could mean endless sleepless nights for you.

Solution: Keep your puppy close, but don't give in to every whimper
"We had to learn not to get up at the very first whimper," Austin said. "Most of the time he's just bored and wants to play, and only whimpers for a minute or so and goes back to sleep."

Experts at 3LostDogs.com suggest letting your puppy sleep in your bedroom—in his or her crate—to help with separation anxiety when he is not glued to your side. This can help reassure your puppy so that he doesn't beg for your attention throughout the night.

Even though puppies can be a lot of work, Austin said there are many perks to puppy ownership.

"[Pudge] is a major momma's boy and likes to cuddle up close to my face as much as he can."

Categories:  Pets
Copyright © Berger Publishing, LLC. All rights reserved. Website and all content is the property of Hooray For Family and may not be copied or otherwise used without the express written consent of the Hooray For Family publisher. 2023