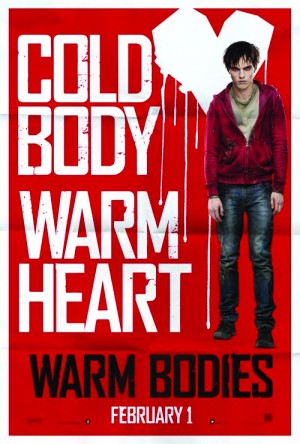 MPAA Rating: PG-13 for zombie violence and some language

SYNOPSIS: After a young zombie named R saves a girl named Julie from an attack, the two form a relationship that sets in motion a sequence of events that might transform the entire lifeless world into something different ... something human...

Sex/Nudity: It's unclear how old the kids are, but they're either teens or in their early 20s. A few kissing scenes, flirting and hand-holding. In one scene, Julie is so cold in her wet clothes that she strips down to her bra and panties (as R watches) and climbs under the covers to get dry. She tells R he can sleep on the floor in the room where she's sleeping.

Violence/Gore: The "bonies" are scary looking zombies who no longer have any flesh on their bodies. They're frightening and chase people around, hoping to catch and eat them. A few scenes show zombies attacking humans, but no major gore is shown. R and his pals kill a bunch of young adults, and we see R eating his catch's brains. Humans form a militia to hunt and kill zombies. Zombies are pale and lifeless, and are shown shuffling around. A zombie is shot and begins to bleed.

Drugs/Alcohol: It's unclear how old Julie is, but she drinks a Corona beer that R offers her.

Will Parents Like It? "Warm bodies" is really more of a sweet teen drama than a gory zombie movie. It's the sort of movie that appeals to both teens and grownups.

"Warm Bodies" starts out much the same as other zombie movies, in that there's been some sort of apocalypse, which results in lots of pale, lifeless zombies shuffling aimlessly around. Many of them have taken up residence in an abandoned airport, possibly -- as our zombie hero "R" (Nicholas Hoult) tells us -- because airports are a place to "wait" for something else to happen. He's just not sure what he's supposed to do next, but one thing is for sure -- he's lonely. He also feels conflicted whenever he has to eat someone.

During a hunting expedition with his best friend "M" (Rob Corddry), R and his zombie friends attack a group of heavily armed young adults who are out on a scouting mission. R kills the group's leader, Perry (Dave Franco), and is immediately drawn to his victim's girlfriend, Julie (Teresa Palmer).

To save Julie from the other zombies, R takes her back to his place (an abandoned airplane), and something starts to happen. As the two connect with each other, R's heart starts to stir and he begins to recapture his humanity. Unfortunately, Julie's dad is General Grigio (John Malkovich), the leader of the local militia who's out to kill all the zombies. He would never condone Julie's friendship with a corpse.

"Warm Bodies" is from Summit Entertainment, the studio behind all the "Twilight" movies. I'm not sure if zombies are the next vampires or not, but this movie is a lot of fun and, as previously mentioned, not as gross as other zombie movies. It's definitely nowhere near as bloody as the AMC show "The Walking Dead."

"Warm Bodies" is based on the young adult novel by Isaac Marion, which helps to give the movie a bit of a backstory. It also features a great soundtrack of classics like John Waite's "Missing You," Guns N' Roses' "Patience," and Bruce Springsteen's "Hungry Heart," along with more modern tunes from Feist, Chad Valley, and Delta Spirit.

Nicholas Hoult, who started his movie career as the kid in "About a Boy" and also starred in the U.K. series "Skins," is surely the "next big thing." He's adorable and has that appealing boy-next-door vibe. He also has great chemistry with Teresa Palmer, who is perhaps best known as "Number 6" in the teen alien thriller "I Am Number Four." She's adorable, too. Together, they're adorable times two.

The script for "Warm Bodies" is witty and fun, and I also appreciate that there's not a lot of people to keep track of. Corddry is funny as R's best friend, Analeigh Tipton is great as Julie's best friend, and Malkovich is his usual Malkovich self.

Overall, "Warm Bodies" is a great date movie, but also a well-acted, well-written book adaptation that appeals to both teens and grownups. With a weekend box office of $20 million, we'll no doubt have a sequel or two to look forward to.