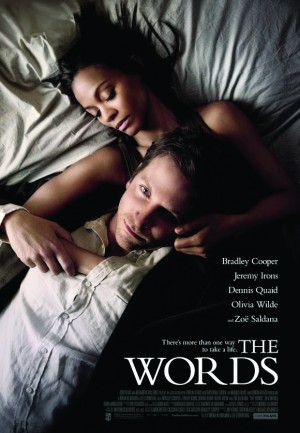 SYNOPSIS: What happens when one man steals another man's work? Rory Jansen (Bradley Cooper) finds out when he stumbles across an ancient manuscript and claims it as his own, becoming a publishing sensation and the pride of his family.

Sex/Nudity: Couples kiss and make out, but no nudity.

Violence/Gore: A few heated arguments. A man trashes a room in anger. A baby dies from an illness, leaving the parents grief-stricken.

Drugs/Alcohol: Adults drink socially at parties and dinner. A few scenes show adults getting drunk. People smoke cigarettes in scenes set in the past.

Which Kids Will Like It? Kids 13 and older who like thoughtful movies, or movies starring Bradley Cooper or Zoe Saldana. This is also a great film for people who love books and words, and there's also a bit of war-time history in scenes set in the past.

Will Parents Like It? The filmmakers missed an opportunity to delve more deeply into the characters, but overall, it's a thoughtful film about the impact of choices in our lives. The PG-13 rating is on target.

REVIEW: When it comes to runtimes, my usual complaint is that a film runs too long and drifts away from the storyline's focus. With The Words, however, it's the opposite. Ninety-seven minutes isn't long enough to fully explore the characters, their relationships, and how the choices they've made impact their lives.

I kept thinking (because I often talk to filmmakers in my head during movies), just go a little further. Why are these people doing what they're doing? Show us their motivations and make us pull for them. It's almost there, but never quite makes the final push to fully immerse us in their lives. A bit of restructuring might have helped. There were too many stories within stories, and too many questions left unanswered.

Bradley Cooper plays Rory Jansen, a man whose lifelong dream to be a published author has never been realized. Oh, he tries. He spends nights hammering out words on his laptop and never gives up hope. But things aren't easy. To make ends meet, he has to borrow money from his dad (J.K. Simmons), who finally tells him to grow up, get a job, and be a man.

One day, Rory stumbles across an ancient, dog-eared manuscript hidden in an old leather portfolio that his wife Dora (Zoe Saldana) bought for him on their honeymoon. The words in the manuscript move him deeply, and he sits down and types the whole thing out on his laptop, word for word, no comma out of place. When Dora accidentally comes across it on the computer, she believes it to be his, and begs him to take it to the publishing house where he works (that job his Dad told him to go get).

The urge to become a published writer is too strong, and Rory gets caught up in the fiction of his own story. He takes it to the publisher, who loves it, and Rory soon becomes a publishing sensation. It's the life he's always dreamed of. Or ... is it? He starts second-guessing his choices when an old man (Jeremy Irons, who's brilliant, as always) has a few words of his own about the book.

If you love books or publishing or words, you should see this movie, though I do have a few gripes about it. Part of the problem is that the story is told through famous writer Clayton Hammond (Dennis Quaid), who's reading his book, The Words, to an audience. We never really learn whether the book is fiction or nonfiction, nor whether the real-life characters are supposed to be the fictional characters. There are too many layers, too many stories within stories, and not enough answers.

That said, the players do a fine job with what they're given. It's exciting to see Cooper move beyond The Hangover franchise and take on more thoughtful roles. Watch for a couple of his current films, Silver Linings Playbook and The Place Beyond the Pines, to play into the upcoming awards season.

Saldana gives a solid performance as a wife who wants to support her husband and his dreams, but who perhaps also gets caught up in the fame of living with a publishing rock star. I would have loved to know a little more about their relationship. We really only get a glimpse of why they do what they do.

The standout performance is Irons. I always get the feeling that he lives and breathes his characters, whether it's an understated role like this one or a bold role like his portrayal of Rodrigo Borgia in Showtime's The Borgias. Scary good, in more ways than one.

Quaid seems to play the same character in a lot of his movies. Whether it's Rev. Moore in 2011's Footloose or the dad in Soul Surfer, I always leave the theater thinking, oh, that's Dennis Quaid playing a strict minister and a supportive dad. He's always there in his roles.

Olivia Wilde plays an adoring fan who goes home with Clayton after the reading. Frankly, I'm not even sure why she's in this movie. I guess she makes us question certain things about him and his book, but we never really get any answers.

Also have to mention Ben Barnes and Nora Arnezeder, who play characters within the story-within-a-story. Their war-time romance is so intriguing and their characters so heartfelt and captivating, I almost wish the movie had been all about them, without the current-day plot.

So yes, The Words has some problems, but it's still worth seeing if you love books or words or any of these actors. Just don't go into it expecting to be completely fulfilled by the story. The PG-13 rating is on target and ok for kids 13 and older.

Side Note Trivia: The director, Brian Klugman, is a longtime friend of Cooper's who played the role of awkward teen Kirby in Frasier. He's also Jack Klugman's nephew.

Back To Top
By Jane Boursaw | September 05, 2012
Categories:  Movie Reviews