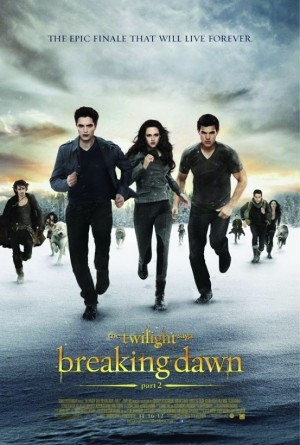 MPAA Rating: PG-13 for sequences of violence, including disturbing images, some sensuality and partial nudity

SYNOPSIS: The Twilight Saga comes to a close with this movie, which picks up after the birth of Renesmee, the half-human half-vampire offspring of Bella and Edward Cullen. But the little one sparks a threat from the Volturi, spurring the Cullens to gather other vampire clans in order to protect the child from false allegations.

Sex/Nudity: Edward and Bella have mad vampire sex (they're married now, after all). We don't see any graphic nudity, and the scene centers mainly on their faces and a few glimpses of bare skin. One scene shows them standing in profile; we can see their bare backs and the side of Bella's breast. A few passionate kisses between Edward and Bella, as well as other vampire couples in the movie. A male vampire falls for a female vampire because of her electricity skills.

Violence/Gore: Vampires and werewolves can be pretty scary characters, so the threat of violence looms large throughout the movie -- mainly from the evil Volturi. A flashback shows a mother and her immortal child killed and burned. The Cullens and friends practice their fighting skills before facing the Volturi. Vampires exhibit a variety of talents, including electric shock, telepathic torture, and manipulating the elements. In a climactic battle scene, various characters -- some of them shocking -- are injured, beheaded, burned, tortured and hurt.

Which Kids Will Like It? Kids 13 and older who've followed the Twilight movie franchise or read the books.

Will Parents Like It? This may be the best of the Twilight franchise. The main fight scene gets pretty intense, but there's a reason it snuck under the PG-13 rating. I'd say more, but don't want to reveal a major spoiler.

REVIEW: I admit I've been both gleeful and sad for this last installment of The Twilight Saga franchise. Gleeful because I couldn't wait to see what they did with the last chapter of the story. Sad because I don't want it to end. But something tells me this isn't the end of Twilight. We've got a whole new generation coming up, after all. And we want to see what happens with the story of Renesmee and Jacob (a spin-off has been rumored).

The story picks up after the birth of Renesmee (Mackenzie Foy), the half-vampire half-human offspring of Bella (Kristen Stewart) and Edward Cullen (Robert Pattinson). And what an adorable little thing Foy is. She's just perfect for the part -- sweet, soulful and beautiful.

Bella is now a vampire, having been turned by Edward after the painful birth of Renesmee. Now she's vibrant, sensual and very much alive (though very much dead in vampire terms). Her senses are heightened, and it's cool to see her racing through the forest with Edward (though, ok, the fast-motion sequences are a little cheesy), stalking mountain lions, and leaping off cliffs with Edward looking after her going, "Yeah. That's my girl."

While they're out testing her new prowess, back at the Cullen home, Jacob (Taylor Lautner) has imprinted on Renesmee. That's a werewolf thing, an involuntary mechanism by which the Quileute shapeshifters find their soul mates. It makes perfect sense to me. After all, wouldn't Bella want her child to be protected under the loving fur of Jacob for the rest of her life? But Bella doesn't see it that way. She's mortified by the very idea, and roughs Jacob up while the Cullens watch cheerfully.

But an even bigger issue looms after vampire Irina (Maggie Grace) sees the child, mistakes her for a full vampire, and reports back to the Volturi, lead by evil Aro (Michael Sheen - he does evil so well). Vampires are not allowed to procreate, because the children are uncontrollable and wreak havoc on other vampires.

Alice (Ashley Greene) has a vision of the Volturi coming to kill the Cullens, so the family enlists help from other vampires around the world to "witness" the child and tell the Volturi that she's no threat. Still, the Volturi show up in the supernatural town of Forks, Washington, and there's a showdown on the ice. I don't want to give away any spoilers, but just keep the faith when all seems lost. That's all I'm saying.

Breaking Dawn Part 2 follows the book fairly closely except for a few variations in the ending. If you're a Twilight fan, there's much to love about this movie. Bella is no longer a shy, awkward teenager. She's now a full vampire who's strong, sexy and confident. As she says in a voiceover, "My time as a human is over, but I've never felt more alive. I was born to be a vampire."

Jacob is no longer the pouty, lovestruck werewolf fawning after Bella. He has a new purpose in life, and her name is Renesmee. We also get to see some new vampires: Casey LaBow as Kate, a member of the Denali coven; Lee Pace as Garrett, a Revolutionary War friend of Jasper's; Rami Malek as Benjamin, an Egyptian vampire; and my favorite, Joe Anderson as Alistair, a distrustful vampire who grew up in England during the turbulent reign of Edward II.

The landscape of the Pacific Northwest offers a beautiful backdrop to the story, especially the opening titles with the familiar Twilight music blending into the scenery. A variety of artists provide music throughout the movie, including Green Day ("The Forgotten"), Christina Perri ("A Thousand Years Part 2"), The Boom Circuits ("Everything and Nothing") Ellie Goulding ("Bittersweet"), and Paul McDonald and Nikki Reed ("All I've Ever Needed").

Edward and Bella's cottage in the woods is straight out of a fairy tale - cozy and sweet. And as usual, Charlie (Billy Burke - to get your fix, watch him on NBC's Revolution) has some of the funniest lines.

If you're a fan of the Twilight franchise, don't miss this beautiful final chapter, and be sure to stay through the credits to get a final look at your favorite characters.

I'll leave you with this -- the words from Alfred, Lord Tennyson's "Choric Song of the Lotos-eaters" that Bella read to Renesmee as she fell asleep: