THE ODD LIFE OF TIMOTHY GREEN 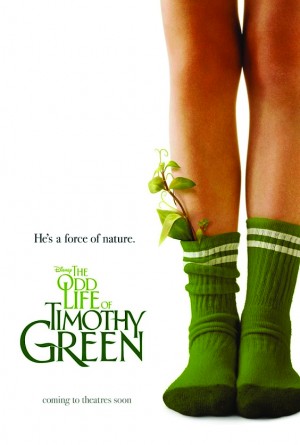 SYNOPSIS: Jennifer Garner and Joel Edgerton play a childless couple who bury a box in their garden containing all of their wishes for a child. Soon, a boy mysteriously appears in their house, dirty and with leaves attached to his legs.

Sex/Nudity: Cindy and Jim kiss briefly. Timothy and Joni have a strong friendship that borders on romantic.

Violence/Gore: Timothy magically appears and then disappears, which might freak kids (and parents) out. An older person dies in a hospital setting. Timothy is bullied by kids at school. Joni saves Timothy from drowning in a pool at a birthday party.

Drugs/Alcohol: Cindy and Jim drink wine on the night they dream up traits for their child and bury the box in the garden.

Will Parents Like It? The PG rating is mostly on target, although there are a few sad scenes that might require Kleenex.

REVIEW: The Odd Life of Timothy Green is an odd little movie. It's the sort of movie you think must be based on a children's fantasy book, possibly by someone like Lois Lowry, author of The Giver and Number the Stars, who writes about difficult subject matters like illness and murder for her young readers.

It's the sort of movie where you might ask yourself, "What are they trying to tell us here? What's the message? That if you dream hard enough and plant a box in the garden with all the traits you want in a child, that child will suddenly and mysteriously appear in your house, all dirty and confident, with leaves growing out of his legs?"

But no, it isn't based on a book written by Lowry or any other author. The story was actually penned by Ahmet Zappa, the 38-year-old son of songster Frank Zappa. Yeah, I can see that. The story is cute and heartfelt, but also has a dark side to it. Kind of like a Frank Zappa tune.

It's really great to see Jennifer Garner on screen again. She's one of my favorite actresses, and she's only done a smattering of films over the past few years while raising her young family with husband Ben Affleck.

Here she plays Cindy Green, who along with husband Jim (Joel Edgerton) is distraught over the fact that they can't have children. So one night in a fit of wine-soaked despair, they write down all the traits their phantom child will have – loyalty, honesty, musical abilities and so on – then stuff the notes into a wooden box and bury it in their garden. 'Nuff said, time to move on.

After checking with the authorities to see if any dirt-and-leaf-covered kids have been reported missing, Jim and Cindy claim Timothy (CJ Adams) as their own. They enroll him in school, watch over him like protective bears, and encourage him in pursuits like soccer (even when the coach makes him the water boy), drawing (even when he draws people, warts and all – he's honest, after all), and music (even when they have to jump in and start singing to keep him from being a laughing stock).

Meanwhile, Jim's dad has daddy issues of his own. Jim Green Sr. (David Morse) was never a very supportive father, so it's all a little odd that Jim Green Jr. just wants Timothy to do well at soccer so he can say "See? This is what you missed?!" to his own father. But he's learning how to be a dad, so it's all good.

Maybe I'm trying to read too much into The Odd Life of Timothy Green. Maybe it's just meant to be a sweet, funny, sad, fantastical tale about a phantom kid who teaches his parents how to be parents until they get a real kid of their own. Still, I feel like I need more.

That being said, the story IS intriguing and kept my attention all the way through. Timothy's young friend Joni (Odeya Rush) is different, too, which makes for an endearing friendship. I get to see Jennifer Garner on screen again. And even though there are some sad scenes, it ends on a hopeful note about the joys of being part of a family with wonderful, caring parents.