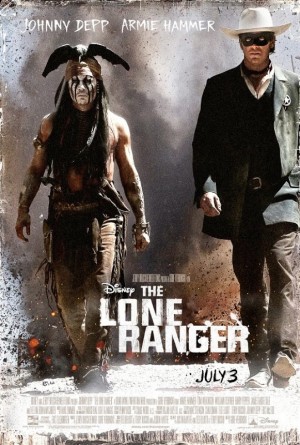 MPAA Rating: PG-13 for sequences of intense action and violence, and some suggestive material

SYNOPSIS: Native American warrior Tonto (Johnny Depp) recounts the untold tales that transformed John Reid (Armie Hammer), a man of the law, into a legend of justice known as The Lone Ranger.

Sex/Nudity: A few kisses and one hug. One scene takes place in a brothel, but nothing too risque is shown other than women dressed in cleavage-baring corsets. A female character has a leg made of ivory, which she invites men to look at and sometimes touch (and sometimes work their way provocatively up her leg).

Violence/Gore: Fairly violent for a PG-13 movie. Villain Butch Cavendish not only shoots people, but he's also known for cutting out and eating their body parts. One scene depicts him slicing a man's chest open (we don't see it close up) and holding the victim's heart in his hands. He's then shown eating the heart, but mostly in silhouette. The body count is high, with lots of explosions, shooting and fighting. White outlaws (and one Mexican) dress up like Native Americans and terrorize people, shooting them with arrows, burning down their homes, etc. The Army also fights and kills Native Americans. A woman is held hostage and slapped, pushed and threatened with rape. Men are scalped, blown up and drowned. Horses are shot and killed in battle. A young man lies and says that Tonto and the Ranger threatened to "violate" him. A boy holds a gun on a man who's threatening his mother. A man slaps a boy in the face. In one scene, cute bunnies turn ferocious.

Drugs/Alcohol: Adults drink from jugs and wine glasses. Men smoke cigars, which is accurate for the time period.

Which Kids Will Like It? Kids 15 and older who like Johnny Depp movies or westerns with lots of action.

Will Parents Like It? "The Lone Ranger" is long, rambly and lacks focus, and it's violent for a PG-13 rating. But the action and stunts are entertaining, and the cinematography and locations are gorgeous.

REVIEW: I saw "The Lone Ranger" the day after it hit theaters, and by then, both movie critics and moviegoers had slammed the movie mercilessly, calling it a jumbled mess and the worst movie they'd ever seen. But I always try to keep an open mind, because frankly, quite often I end up loving the movies that everyone else hates.

All that being said, "The Lone Ranger" isn't the greatest movie I've ever seen, but it's certainly not the worst. Sure, it's long and rambly and lacks focus. But if you like Johnny Depp movies or have a nostalgic feeling for "The Lone Ranger," don't let others dissuade you from seeing it. It's still an entertaining thrill ride with great characters, stunts and locations (though I realize much of that is added later via computer-generated special effects). The final scenes with people fighting inside, outside and atop a moving train are really fun.

"The Lone Ranger" is a reboot of the story and characters made popular in the film serials circa 1930s and the TV show which ran from 1949 to 1956, starring Clayton Moore as The Lone Ranger and Jay Silverheels as Tonto. This new version reteams director Gore Verbinski with his "Pirates of the Caribbean" muse Johnny Depp, who stars as Tonto.

The story begins in 1933 San Francisco, where a boy in a Lone Ranger costume wanders into a Wild West show at a carnival and sees an ancient "Noble Savage" in an exhibit. The wrinkled Native American, who we learn is Tonto himself, tells the boy the story of attorney John Reid (Armie Hammer), who returns to his small Texas town in 1869, where his brother Dan (James Badge Dale) is the head Ranger. A railroad executive (Tom Wilkinson) is planning a public execution to prove to the community that the Iron Rail -- i.e. the new train being built -- won't bring lawlessness to the town.

But the criminal Butch Cavendish (William Fichtner - who knew he could play such a nasty villain?) escapes, and Dan's entire crew of Rangers is killed trying to recapture him, including the newly deputized John Reid. But a white spirit horse (Hi-Yo, Silver!) leads Tonto to John's body, who re-awakens and eventually becomes ... The Lone Ranger. John and Tonto form an uneasy alliance to bring justice to the old west.

Ok, there are some problems with "The Lone Ranger." As mentioned, it's long. Surely a good film editor could have hacked at least 20 minutes from the 149-minute runtime. It also lacks focus, and the plot is overly complicated and violent (cannibalism! rape!). Remember, this is a movie with LEGO tie-ins, and it's not exactly family fodder. Some scenes play like an episode of "The Walking Dead."

You've also got a strange brew of cool stunts (Armie Hammer can really ride that horse), politically correct storylines (Native Americans die at the hand of soldiers), snappy banter, and emotional backstories that find Tonto disenfranchised from his tribe and The Lone Ranger in love with his brother's wife, Rebecca (Ruth Wilson, who's a dead ringer for Michelle Monaghan).

But anyone who grew up with the film or TV versions will surely feel a tinge of nostalgia at hearing Rossini's iconic "William Tell Overture" as Tonto and The Lone Ranger get the bad guys. Depp's version of Tonto has taken some flack, but aside from having only one facial expression for the entire movie, he still manages to play the character as clever and wise.

Other locations include Canyon de Chelly National Monument in Chinle, Arizona; Hurley, New Mexico; Monument Valley, Utah; and Puerco Valley, New Mexico. You can tell this is a production with a lot of cash behind it, including the extravagant set pieces (that train!), the likes of which only a Johnny Depp/Gore Verbinski production financed by Jerry Bruckheimer could afford.

The bottom line is that "The Lone Ranger" isn't the best movie of the year, and it's really not for kids younger than 15, if that. But it's still a worthy entry in the 2013 Summer Movie Lineup. Johnny Depp has a crow on the top of his head, for gosh sakes.