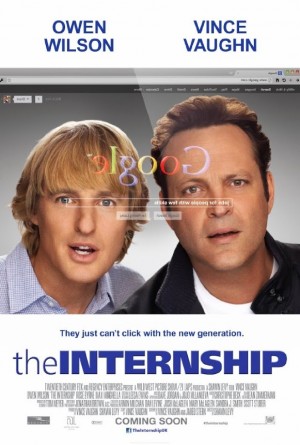 SYNOPSIS: Vince Vaughn and Owen Wilson team up in this comedy about two middle-aged salesmen who lose their jobs and then talk their way into an internship at Google, where they compete for jobs against brilliant tech-oriented college kids.

Sex/Nudity: A main character flirts with a higher-up at Google, then asks her on a date (which ends with her sending the cab away and both of them going into her house). Later we see them kiss. One scene takes place at a strip joint with scantily-clad dancers giving lap dances and moving suggestively. One joke about a man ejaculating several times after lap dances (we see him using a wall dryer in the bathroom to dry himself off). A mattress salesman ogles a customer and makes suggestive moves while showing her a mattress. A joke about a "boob job" includes a brief glimpse of a large-breasted woman in a tiny bikini.

Violence/Gore: A man is punched in the groin in one scene. Adults get into a barroom brawl, but no one is injured.

Drugs/Alcohol: One joke about getting "high." Adults drink beer or wine at meals or to de-stress. One scene shows adults getting drunk, first at a restaurant and then at a strip joint, where they drink tequila shots. One person is later shown passed out.

Which Kids Will Like It? Kids 15 and older who like Vince Vaughn or Owen Wilson, or their particular type of humor. It's rated PG-13, but will probably appeal to older teens and adults.

Will Parents Like It? It's a goofy movie that's not the least bit groundbreaking, but I actually laughed out loud during a few scenes.

REVIEW: "Vince Vaughn and Owen Wilson are kind of one-note actors, aren't they?" my husband said as I was walking out the door to see "The Internship."

And it's true. Unless we find ourselves in some sort of Bizarro World a la Superman, you know what you're going to get when Vince Vaughn and Owen Wilson are in a movie. Two goofy guys with hearts of gold who know how to deliver lines for laughs. That's really all I need from their movies. That's why I GO to their movies. There's no surprises here, and I'm cool with that.

In "The Internship," Billy McMahon (Vaughn) and Nick Campbell (Wilson) are middle-aged salesmen who suddenly find themselves unemployed when their boss (John Goodman) shuts down the business and moves to Florida.

After an unsuccessful stint working at his brother-in-law's (Will Ferrell) mattress store, Nick decides to take Billy up on his wacky idea to interview for an internship at Google. Their Skype interview - done on a computer in a kids' library - is hilarious. Yet they somehow manage to talk themselves into the job, and are soon in the brightly-colored Google Headquarters in San Francisco, competing for a coveted job against brilliant, tech-savvy college kids.

It's clear that Nick and Billy are out of their league, so they do what Vaughn and Wilson have done in every other movie - use their limited skills to buck incredible odds. In this case. that would be their ability to talk to anyone and weave '80s references like "Flashdance" into every conversation. (Hey, that little welder girl WAS inspirational, gosh darnit).

They're so clueless about anything in this century that Google sends them on a wild goose chase to track down "Professor Charles Xavier" at a nearby college. That would be the guy in the wheelchair from the "X-Men" movies -- but they don't know that.

While I'm as geeky and tech-tethered as the next girl, I felt a little twinge of nostalgia while watching "The Internship." Nostalgic for a long-gone era when I donned legwarmers and attempted (unsuccessfully) to dance like Jennifer Beals. Nostalgic for a time before technology completely took over my life.

That's the message from Nick and Billy -- people, we HAVE to unchain ourselves from our devices and go see people face to face. We're losing whatever ability we had to interact one-on-one with each other, and it's more important now than ever before.

"The Internship" also makes me nostalgic for more movies with the undeniable bromantic chemistry between Vaughn and Wilson, and their crazy ability to deliver lines with perfect timing and finish each others' sentences. More, please!

Until that happens, I'll go back and watch "Wedding Crashers" again. There's nothing groundbreaking in "The Internship," but it sure is nice to see these two guys on screen together again.