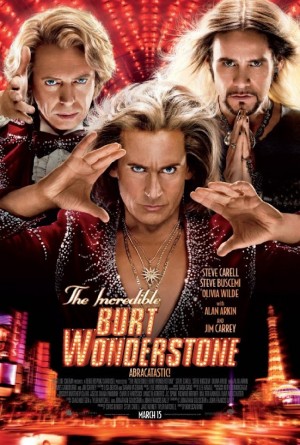 SYNOPSIS: Steve Carell and Steve Buscemi play superstar magicians whose act and friendship starts to get old after several decades together. But when a street magician's (Jim Carrey) outrageous stunts make the duo look bad. they decide to stage their own daring stunt. That's when things really start to spiral out of control.

Sex/Nudity: Burt is quite the ladies' man who picks beautiful women out of the audience to help with tricks and then takes them back to his suite to have sex. He also brags about his mega-king-sized bed that accommodates a dozen people, and women are shown in bras and underwear making out with him in bed. In one scene, Burt and Jane do magic tricks and she makes a bag of Trojan condoms appear out of thin air; he then replaces it with Magnum XLs.

Violence/Gore: As a kid, young Burt Wonderstone is bullied, punched, and shunned at school. Street magician Steve Gray routinely does dangerous stunts, like forcing someone to punch him in the face, lighting himself on fire, cutting open a wound on his face, sleeping on burning coals, and even drilling a hole in his skull.

Drugs/Alcohol: A few scenes show adults drinking. Burt gets drunk in one scene, and a magic stunt of Burt and Anton's involves them drugging an entire audience and moving them outside.

Which Kids Will Like It? Kids 14 and older who like slapstick-type comedy or movies featuring Steve Carell or Jim Carrey.

Will Parents Like It? Even with the high-powered cast, this movie could have used a little magic to bring it to life.

REVIEW: "The Incredible Burt Wonderstone" is two movies. The first half is a cartoonish movie with slapstick stunts, stupid jokes and juvenile behavior, featuring a self-centered, bitter magician who beds ladies and fights with his lifelong friend and partner. We'll call that Movie #1.

The second half -- Movie #2 -- is a sweet story of friendship and romance, featuring a loveable guy who entertains nursing home residents with his magic, takes the high road when faced with a conflict, and finds love with a great girl. I really liked Movie #2. Movie #1, not so much.

The story begins with a young kid getting bullied, punched in the stomach, shunned by other kids at school, and spending his birthday alone while his mom works. Then he meets another kid and the two become fast friends and bond over a cool magician's set. They remain friends into adulthood, and end up as a famous magic act known as Burt Wonderstone (Steve Carell) and Anton Marvelton (Steve Buscemi).

Jump ahead a few decades, and their Vegas act has grown stale and the two friends seemingly hate each other. When street magician Steve Gray (Jim Carrey) starts showing them up with dangerous stunts (usually involving self-mutilation) for his TV show "Brain Rapist," Burt and Anton's boss, casino mogul Doug Munny (James Gandolfini), forces them to give their act a makeover.

The two friends part ways, and Burt is fired and finds himself performing magic at a nursing home for retired Vegas performers. There, he meets his hero -- the man behind his first magic set -- Rance Holloway (Alan Arkin).

As mentioned, I loved Movie #2 because you see a believable person in Burt Wonderstone who you could actually care about. But in Movie #1, he's so arrogant and unlikeable that by the time we get to Movie #2, you just don't care about him. Even Carell's awkward-but-charming Michael Scott character on "The Office" had some redeeming qualities.

Look, I'm willing to give anyone the benefit of the doubt when it comes to changing their lives for the better, but this transformation just doesn't seem believable. In Movie #1, Burt is a cartoon character. In Movie #2, he's a sweet guy who comes to love performing magic for kid's parties and nursing homes, and whose spark for magic is reignited by his friendship with Rance Holloway (Alan Arkin can do no wrong; I loved his character).

Jim Carrey brings his usual rubbery, Jim Carrey-ness to the character of street magician Steve Gray. Although I will say, the guy has buffed out! He's definitely been hitting the gym lately. But Steve's stunts offer several cringe-worthy moments. He does stuff like sleep on a bed of hot coals all night, keep his eyes open for crazy amounts of time, force people to punch his face, and then carve out the wound with a knife, only to find a piece of paper upon which the magic stunt was based.

Olivia Wilde is gorgeous, as always, but she doesn't have a lot to work with. In Movie #1, she's the eager assistant who's admired Burt from afar, but shuns him when she learns of his egotistical, arrogant ways. She warms up to him in Movie #2 -- and that's when the real magic between these two occurs. I really wish the whole 100 minutes of "The Incredible Burt Wonderstone" had been Movie #2. I would have gone for that.

Is it worth sitting through Movie #1 to get to Movie #2? That's questionable, but I'd say that seeing all these great actors on the screen, especially Alan Arkin, is worth a look. But you might wait and rent it on DVD or blu-ray, or just see it for free when it shows up on cable somewhere down the road.