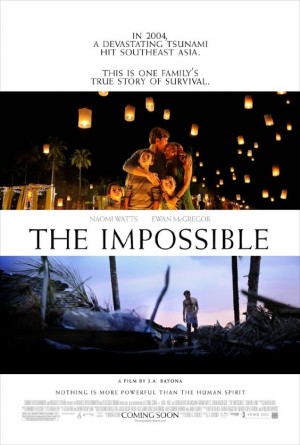 SYNOPSIS: Based on a true story, this intense family drama is set against the backdrop of the 2004 Asian tsunami, one of the worst natural disasters of our time. A family struggles to survive and find each other in the aftermath of the storm.

Violence/Gore: The tsunami causes mass destruction, including people swept away in a rush of water, drowned, impaled or crushed by debris. Some bodies are shown in the aftermath. A mom is seriously injured, including lots of blood and a large section of skin hanging off her leg. People in a hospital are bloodied, lying on floors and makeshift beds, and grieving the loss of loved ones. At one point, a child believes his entire family is dead.

Drugs/Alcohol: Adults drink at a hotel bar and dinner party.

Will Parents Like It? "The Impossible" is an intense, gripping movie that draws you in and won't let go.

REVIEW: I didn't want to see "The Impossible." I like a good disaster movie as much as the next girl, but generally gravitate towards fictional cataclysmic thrillers like "2012" or "The Day After Tomorrow." Or perhaps a nice alien invasion like "Independence Day" or an asteroid hurling towards earth like "Armageddon."

But when it comes to real-life disasters, especially those involving a family torn apart like in "The Impossible," that's a different story. You can see how easily it could happen to you and your family if you happen to be in the wrong place at the wrong time. Very scary stuff.

That being said, "The Impossible" is a very well done and gripping film that had me on the edge of my seat from beginning to end.

It's based on the true story of a family that survived the Asian tsunami in 2004. Henry (Ewan McGregor) and Maria (Naomi Watts) are a British couple who travel to a luxury resort in Thailand for a Christmas holiday with their three kids -- tween Lucas (Tom Holland) and two younger boys, Thomas (Samuel Joslin) and Simon (Oaklee Pendergast).

On Dec. 26, 2004, as the family is playing poolside, they hear a distant noise that becomes a roar, and the massive tsunami hits the area, sweeping thousands of people into the ocean. Maria and Lucas are swept one way, but manage to come together and climb a large tree, rescuing a small boy along the way. Maria is gravely injured, and has a large flap of skin hanging off her leg. They don't know if the rest of their family survived or not.

Watts is terrific as the steadfast mom who will do anything to protect her son, even as she loses massive amounts of blood and struggles to survive. She's nominated for Best Performance by an Actress in a Leading Role at the upcoming Oscars telecast on Feb. 24.

But the standout performance, in my view, is Tom Holland, who's so engaging as her son Lucas. You really feel the connection between the two of them, as he wills his mom to survive, is understatedly embarrassed when his mom's breast is exposed after the tsunami whirls her about in the water, and calmly takes care of her as they make their way to a Thai hospital. At one point when he believes he's the only surviving member of his family, you weep with him in despair.

Just an excellent performance, and I can't wait to see what he does next. This is Holland's first feature film (he also voiced the part of Sho in the UK version of "The Secret World of Arrietty"). Up next for him is "How I Live Now," in which he co-stars with Saoirse Ronan. It's a war drama that takes place in England, and is due in theaters Oct. 3, 2013.

Aside from the realistic effects and great acting in "The Impossible" (McGregor, Joslin and Pendergast also turn in fine performances), I love how director Juan Antonio Bayona takes a hugely destructive natural disaster and hones it down to one family struggling to survive and find each other. It also reminds us that even in the darkest events in our lives, there's always hope and small miracles to be had.

My one misgiving about the movie is the PG-13 rating. There are some intense scenes of peril and despair, and I'm not sure we need to be putting any "this could happen to us" thoughts into our kids' heads. For that reason, I'm recommending it for kids 15 and older. This is one of those movies that would benefit from a PG-15 rating, if one should ever exist.