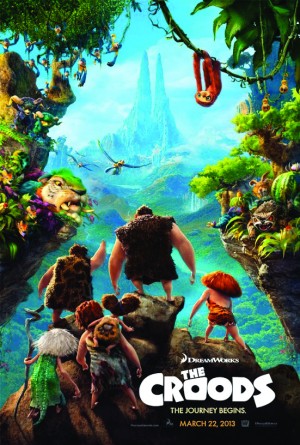 SYNOPSIS: When their world starts to crumble, a prehistoric family goes on a road trip through uncharted territory and a fantastical world. Complicating things is an adventurous teenager and her overprotective dad.

Sex/Nudity: A teenage boy and girl flirt and hold hands.

Violence/Gore: Things are dicey in the prehistoric world, with all sorts of creatures out to eat the Croods. The opening scene references other families who've perished through the years, and Guy mentions the death of his parents. Lots of talk about the end of the world, with earthquakes, explosions and fires threatening to do our heroes in. The Croods work together to catch their food, starting with a "family kill circle" and progressing to spears, rocks and fiery sticks. Two characters get caught in tar and have to use their wits to escape. A main character appears to die at one point.

Will Parents Like It? "The Croods" is a beautifully animated, fun movie that both kids and adults can enjoy.

REVIEW: At last! A family movie that both kids and adults can enjoy! They're so few and far between these days, I really rejoice when one comes along. "The Croods" is a fun movie with beautiful animation, a superb voice cast, and a great story (written by directors Kirk De Micco and Chris Sanders, along with the great John Cleese).

Grug is super protective of his family, and would prefer they spend their entire lives inside a cave, only venturing out to hunt for food. His motto? "Never not be afraid."

That's a far cry from Eep, an adventurous and fearless girl who climbs cliffs to see what lies beyond their little corner of the world. One day during a sneak-out, she meets a young man named Guy (Ryan Reynolds), who much to her amazement, knows how to create a new thing called "fire."

Guy is a confident and happy explorer. He lost his family earlier, but has an adorable little creature named Belt (Chris Sanders) to keep him company. Guy tells Eep there are big changes afoot on the Earth, and advises her and her family to escape to safety with him -- which they do, despite Grug's skepticism at this brave new world.

Usually with a movie like "The Croods," you might have EITHER gorgeous animation OR a heartfelt story (or too often, neither). But this movie has it all, including a story that's just as relevant today and it was back in the Stone Age: parents need to learn how to let go of their kids at some point and let them venture out into the world.

But truly, the visuals in this movie are stunning. It's like a painting that springs to life -- from a dusty, dry landscape to a beautiful forest filled with every color under the sun. I love the voices, especially Emma Stone as the energetic teenager who screams in joy -- "I love them!" -- when Guy makes shoes for her so she can cross a spiky terrain.

The story moves along at just the right pace, as we journey with the Croods to a world they could never imagine, moving past their fears and relying on each other in these strange new lands. You know you're in for a treat with the opening scene where the Croods run, bounce, shimmy and leap across the landscape to secure a giant egg for their dinner, competing with hoards of other creatures who want it, too.

If I have one complaint, it's that as strong and brave as Eep is on her own, she still relies on men -- Guy and her dad -- to lead the way. Then again, if it wasn't for her adventurous soul, they'd still be stuck in that cave.

Go see "The Croods," and take your kids. You'll be glad you did.