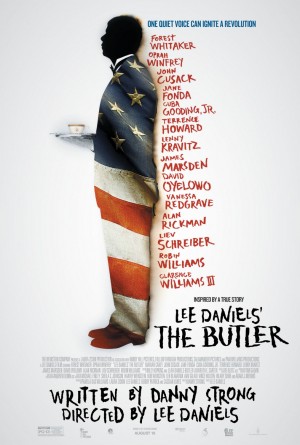 SYNOPSIS: As Cecil Gaines (Forest Whitaker) serves eight presidents during his tenure as a butler at the White House, the civil rights movement, Vietnam, and other major events affect his life, his family, and American culture.

Sex/Nudity: Married couples hug and kiss in several scenes - sometimes in bed. It's suggested that Gloria Gaines is having an affair with a neighbor, who kisses her (but she rebuffs him). Louis and Carol are in love and shown in bed together.

Violence/Gore: As the story spans several decades, it involves race-related hate crimes, including the D.C. riots of 1968; a black cotton farm worker who's shot point blank for saying one word to his white boss; two lynched black men hanging from a tree; and several scenes involving white Southerners (cops, civilians, Ku Klux Klan) beating up, shooting, arresting, setting fire to, and terrorizing African Americans and civil rights activists, including the Freedom Riders. A female cotton worker is raped (off camera, but we hear her screams). Jackie Kennedy is shown with blood covering her suit after JFK's assassination.

Drugs/Alcohol: Some adults smoke cigarettes and drink regularly, especially Gloria, who's an alcoholic.

Which Kids Will Like It? Kids 13 and older who like historical movies, especially about African-Americans and the civil rights movement.

Will Parents Like It? "Lee Daniels' The Butler" is well acted and will no doubt win a few awards this season.

REVIEW: "Lee Daniels' The Butler" tells the story of Cecil Gaines (Forest Whitaker), an African American who begins life working with his family in the cotton fields of early 20th-century Georgia. After witnessing the brutal execution of his father by a soulless white boss, Cecil is brought into the plantation house where he works as a domestic servant.

Eventually, Cecil flees to North Carolina, where a hotel butler takes him in and teaches him the fine art of serving wealthy white patrons. Cecil is offered a job at a prestigious Washington, D.C. hotel, and after waiting on a White House staffer, he's offered the opportunity to join the staff as a butler.

"Lee Daniels' The Butler" is a remarkable film for many reasons. The film boasts an amazing cast, and there's no doubt in my mind that a few of them will land Oscar nominations and awards, including Oprah Winfrey. It's amazing to me that acting isn't something she does regularly - she's lent her voice to a variety of family movies, but the last time she was on screen was in 1998's "Beloved" - and yet it seems to come naturally to her. I'm calling Oscar for Oprah this awards season.

Forest Whitaker also turns in a top-notch performance that manages to be both bold and subtle, and his scenes with fellow White House butlers - including Cuba Gooding, Jr. and Lenny Kravitz - are at turns funny, joyful and heartbreaking. As Cecil's activist son, David Oyelowo (who's had roles in "Red Tails," "The Paperboy" and "Lincoln") is clearly a rising star and one to watch. Look for him in Christopher Nolan's "Interstellar," upcoming in 2014.

And then there's the era this movie spans, a virtual travelogue of the civil rights movement from the late 1950s through the turbulent 1960s though the Obama presidency today. Over the span of two hours, writer Danny Strong (who played Jonathan Levinson on "Buffy the Vampire Slayer" and Doyle McMaster on "Gilmore Girls") weaves in scenes covering Martin Luther King, the lunch counter sit-ins, the freedom riders, Malcolm X, the Black Panthers, desegregation, Vietnam, Kennedy's assassination, and Nixon's resignation.

That's a lot to fit into a two-hour movie, but Strong and director Lee Daniels do an amazing job of blending all of that with Cecil's personal drama, especially the contrasting ideologies between him and his activist son. Louis wants to fight for equality by joining the Black Panthers, whereas Cecil is more reserved. You can understand that, given that his early life was fraught with trauma and tragedy (and yet, he never becomes despondent or pessimistic - a good lesson in rising above adversity).

"Lee Daniels' The Butler" is a solid film, and a great conversation starter for parents and teachers to talk about our country's history of civil rights. The movie is on the long side, but you never feel that it lags or spends too much time on any one thing. It's the perfect combination of history and drama.