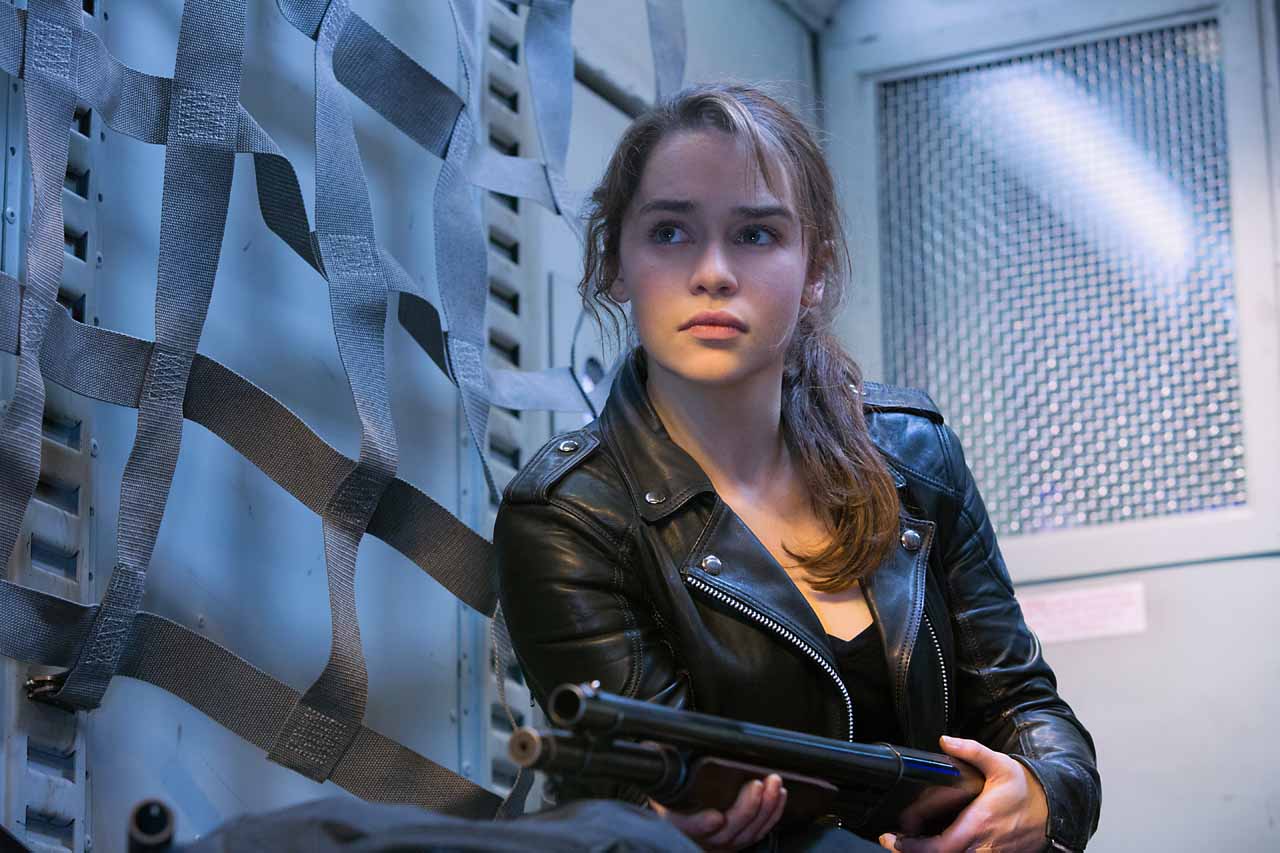 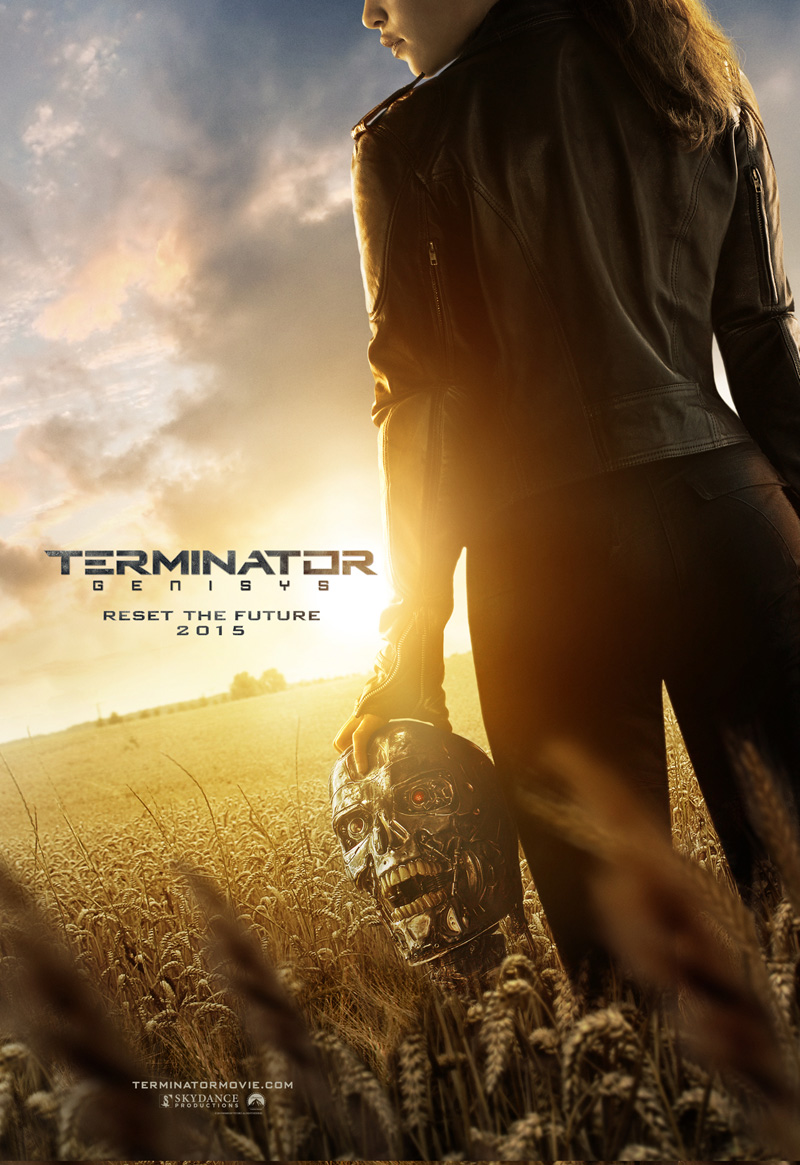 
SYNOPSIS: John Connor sends Kyle Reese back in time to protect Sarah Connor, but when he arrives in 1984, nothing is as he expected it to be.

REVIEW: The first thing you need to know about "Terminator Genisys" is that it's a reboot of sorts, which takes place in the same timeline - well, sort of - as the very first "Terminator" movie. But Sarah Connor is not the scared, timid girl that Linda Hamilton played. Because of some shenanigans within that timeline, she's already a strong, brave, resourceful warrior, and I love it. As she says to Kyle, "I do not need saving."

I mean, look, I loved that Linda Hamilton's Sarah went on to become a kick-ass fighter and weapons expert (remember those muscles? I still have that iconic photo of her character taped to my desk!), but it took her a while to get there.

As with all the "Terminator" movies, including this one, the timeline is a brain twister. Remember in the first movie that John Connor sends Kyle Reese back from the future to protect Sarah Connor, who gets pregnant with Kyle's son, who turns out to be John Connor.

"Terminator Genisys" begins on that same night in the future that John Connor (Jason Clarke) and his followers are launching an assault on Skynet. But they're too late, and the first Terminator (Arnold Schwarzenegger as his younger self thanks to some CGI trickery) is sent back to May 12, 1984 to kill Sarah Connor.

As in the first movie, John sends Kyle Reese (Jai Courtney) back to protect her, but he unexpectedly arrives in an alternate timeline, where, as noted, Sarah (Emilia Clarke) is already a tough, resourceful woman. She also has a guardian - a reprogrammed Terminator she calls "Pops" (Arnold Schwarzenegger as his current, older self).

Because of this alternate reality, Kyle has some new memories - he's essentially remembering a life he never lived - and realizes that their next destination is San Francisco in 2017, where an operating system known as "Genisys" is about to launch. As a side note, Genisys is frighteningly like our "cloud-based" system - everything's online everywhere!

If the trio of Sarah, Kyle and Pops can stop Genisys from launching, they can prevent all the trouble from ever occurring. But as always, that's easier said than done.

This is the fifth movie in the "Terminator" franchise, but it virtually ignores the third and fourth installments - which I'm ok with. Along with Sarah's strong female character (Emilia Clarke is perfect casting), I love that "Terminator Genisys" pays homage to everything that was great about the first movie. There's that iconic photo of Sarah and the dog, the cabin at Big Bear Lake, lines like "I'll be back" and "there's a storm coming" and "come with me if you want to live."

And there are some comical scenes, too, one involving the scene where Arnold comes back from the future in the first movie and approaches the punk rockers and says, "Your clothes. Gib dem to me." (Yes, that's my own translation.)

There's also a running joke about Arnold Schwarzenegger getting older. The Terminator who's been protecting Sarah all these years - his skin ages like a normal human being. Thus, he says, "I'm old, not obsolete." Which, of course, could apply to Schwarzenegger in real life, as well. And based on this movie, he certainly isn't obsolete.

And of course, the visual effects of the war footage and Terminators, including the liquid metal variety, is stunning. You think they can't get any scarier, and then they do - although let's be honest, nothing will rival the scariness of Robert Patrick's T-1000 Terminator in "Terminator 2: Judgment Day."

One character I really missed is Dr. Peter Silberman, the psychiatrist played by Earl Boen in the first three movies. As I recall, his character died in "Terminator 3: Rise of the Machines." Of course, with the time-jumping, he could have been brought back for this movie, but I looked him up on IMDB.com and he's done mainly voiceover work since "Terminator 3." However, in this movie, J.K. Simmons plays a similar character and is a worthy successor.


THE DETAILS (May Contain Spoilers):
Sex/Nudity: No graphic nudity, but male and female characters must be naked to time-travel, and bare torsos and legs are shown. Brief innuendo and one kiss.
Violence/Gore: Sci-fi violence throughout includes laser guns, regular guns, explosions, vehicle chases, nuclear destruction, main characters and Terminators chased, shot at and roughed up. The liquid metal Terminators stab with their blade-arms.
Profanity: One "f--k," a few uses of "s--t," "a--hole," and "goddamn."
Drugs/Alcohol: References to "cold beer" and "moonshine."
Which Kids Will Like It? Kids aged 13 and older who like the "Terminator" franchise or high-action sci-fi films.
Will Grownups Like It? "Terminator Genisys" is a worthy installment in the franchise and pays homage to the first "Terminator" movie in excellent ways.

JANE’S REEL RATING SYSTEM:
One Reel – Even the Force can’t save it.
Two Reels – Coulda been a contender
Three Reels – Something to talk about.
Four Reels – You want the truth? Great flick!
Five Reels – Wow! The stuff dreams are made of.
Jane Boursaw is the film critic and editor-in-chief of Reel Life With Jane. Contact her at jboursaw@charter.net. Images in this review used courtesy of Paramount Pictures.